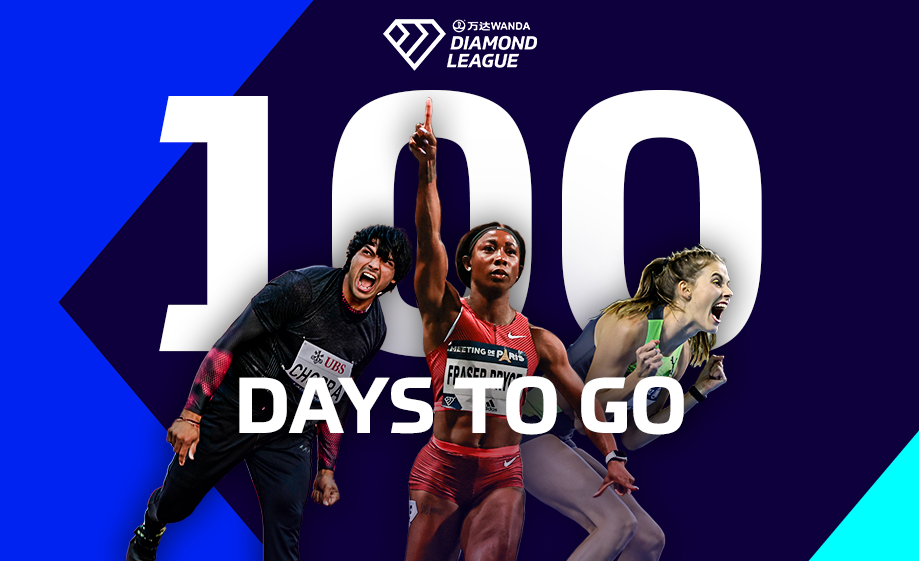 With 100 days until the beginning of the 2023 Wanda Diamond League season, we look back at a star-studded 100m history in athletics' premier one-day series.

In exactly 100 days time, the 14th Wanda Diamond League season will get underway at the Qatar Sports Club in Doha, firing the starting gun on what promises to be the most action-packed year in the series' history.

Athletics' premier one-day meeting circuit will break new ground in 2023. With 15 events in four different continents, it will be the biggest Diamond League since the series bega in 2010. The series final, meanwhile, is set to take place outside of Europe for the very first time at the Prefontaine Classic in Eugene, Oregon on September 17-18th.

One of the headline events in Doha is set to be the women's 100m, a discipline which delivered one stellar performance after another last year. Reigning Wanda Diamond League champion Shelly-Ann Fraser-Pryce will be eyeing a sixth Diamond Trophy in 2023 and can boast a strong record in Doha, having won there in 2013, 2014 and 2021. But with the likes of Shericka Jackson, Elaine Thompson-Herah and Aleia Hobbs also in brilliant form last season, defending her title will be no mean feat.

So with 100 days until the beginning of the season, we take a look back at the star-studded history of the 100m in the Diamond League.

To know how difficult it is to win the Diamond Trophy over 100m, you need only look at the list of champions since 2010. The 100m Diamond League honours board reads like a who's who of sprinting over the past decade and a half. In the men's event, serial champions Asafa Powell and Justin Gatlin dominated the first five or six years of the series, with the fastest man of all time Usain Bolt claiming his only Diamond League title in 2012.

Gatlin was the last man to successfully defend the title, however, and the trophy has proved something of a hot potato with seven different winners since the American's last triumph in 2015. It has, however, been firmly in American hands for the last five years, with Christian Coleman, Noah Lyles, Fred Kerley and Trayvon Bromell all claiming one title since 2018.

It is a similar story in the women's 100m, as the fierce competition of recent years has blown the event wide open and ended an early era of back-to-back titles for stars like Carmelita Jeter, Fraser-Pryce and Elaine Thompson-Herah. The latter was the last woman to win the title twice in a row in 2016 and 2017, and Fraser-Pryce's triumph last season was all the more impressive given that she had last got her hands on the Diamond Trophy back in 2015. Jamaica continues to dominate the women's honours board, with eight of 12 titles so far going to Thompson-Herah, Fraser-Pryce and Veronica Campbell-Brown.

It's not just the weight of history which makes the 100m title a hard nut to crack. The Wanda Diamond League is also the most demanding of major global titles in track and field, pushing athletes to both perform throughout the season and deliver under championship conditions in the season finale.

Both Trayvon Bromell and Shelly-Ann Fraser-Pryce delivered on both counts in 2022, as they not only cruised to victory at the Diamond League Final in Zurich, but also dominated the top five performances of the season.

Fraser-Pryce's outstanding year was marked by ever improving performances in the 100m, as the veteran sprinter notched up world lead after world lead in the Diamond League. Her meeting record of 10.67 in Paris was the first of three en route to the Diamond League Final, the best of which was a stunning 10.62 in Monaco.

That would remain her finest performance of the season, but a strong 10.65 in Zurich meant that she ended the year with both the Diamond Trophy and the four fastest Diamond League times of 2022.

The USA's Bromell had an equally dominant year in the men's 100m, notching up three of the top five performances of the season as he battled his way to a first ever Wanda Diamond League title.

One of only two men to break the 10-second barrier in the Diamond League in 2022, Bromell's best time was a rapid 9.93 in Eugene, with his title-winning performance in Zurich several months later just a hundredth of a second slower.

It was the man he dethroned who notched up the fastest time of the season, however, with 2021 champion Fred Kerley clocking 9.92 in Rome early in June. Though he ultimately failed to defend his title against a devastatingly consistent Bromell, Kerley can still boast of being the fastest man on the circuit in 2022.