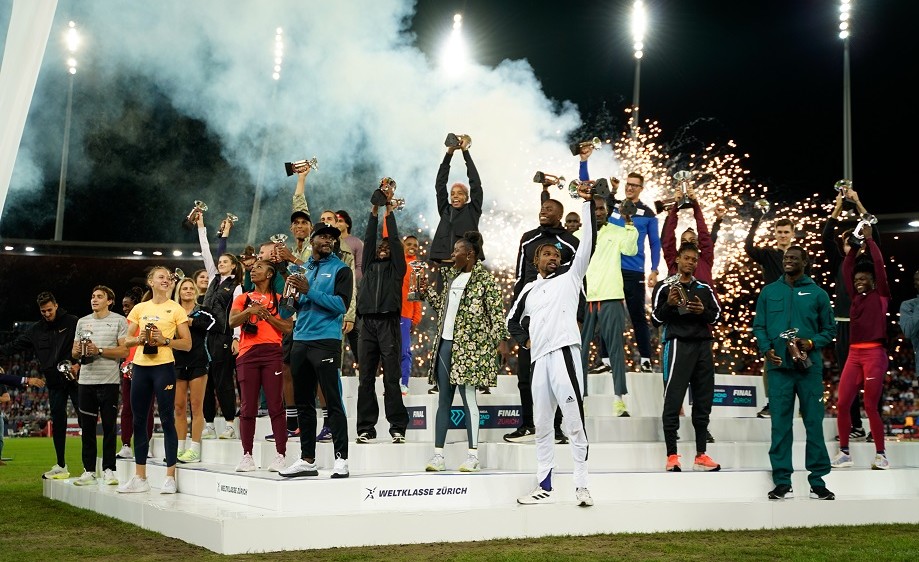 In the final installment of our five-part 2022 season review series, we take a look back at the best of the Wanda Diamond League Final in Zurich.

After touring four continents in four months across 12 series meetings, the 2022 Wanda Diamond League finally reached its dramatic conclusion in early September at the season finale in Zurich.

The two-day bonanza of athletics action saw all 32 Wanda Diamond League champions crowned, with many of them winning the title for the first time in their careers. From the records and the revivals to the dominators and the defenders, here's a look back at all the action from the 13th Diamond League Final.

Summer in the city proved to be quite a rainy affair on day one of the Diamond League Final, as the athletes were forced to battle tricky conditions at the street event on Sechseläutenplatz.

The gathering gloom could not break Joe Kovacs stride, however, as the US shot put star stormed to his fifth successive win of the season with a Diamond League record of 23.23m. He was joined on the shot put podium by compatriot Chase Ealey, who completed an even more dominant season with a perfect record, having won every single competition of the campaign.

Elsewhere, Gianmarco Tamberi edged out Juvaughn Harrison to defend his title in the men's high jump and Nina Kennedy soared to a maiden Diamond Trophy in the women's pole vault, while it was the Kenyans who dominated the 5000m in front of Zurich's famous opera house.

Nicholas Kimeli Kipkorir followed up his victory in Rome to win a men's race which had been difficult to call, while compatriot Beatrice Chebet claimed the women's title.

The remaining 26 Diamond League champions were all crowned the following evening in a three-hour long bumper programme under the lights at the Letzigrund Stadium.

Mondo Duplantis had gone into the final under pressure after his defeat in Brussels, but he rallied to defend his 2021 title and break yet another meeting record with an impressive 6.07m.

“If I came into this competition and I didn’t perform well, the whole season – which was so amazing – wouldn’t feel as good as it should feel,” said Duplantis. “In any competition, on any given day, I think I should be able to jump six metres. Same goals next year. We are going to try and crank it up another notch.”

Yulimar Rojas also defended her title in the women's triple jump, while there were a whole host of first-time winners in the field events.

Greece's Miltiadis Tentoglou got his hands on the men's long jump title after narrowly missing out last season, marking 8.42m to add the Diamond Trophy to his European Championships gold medal from earlier in the summer.

In the javeline, Neeraj Chopra became first Indian athlete ever to be crowned Diamond League champion, while US veteran Kara Winger got her hands on the Diamond Trophy for the first time at the age of 36.

Yaroslava Mahuchikh, meanwhile, continued her resurgent form to win her first outdoor global title at the end of a turbulent year. The Ukrainian had begun 2022 with the world indoor title, before facing disappointment with only the silver medal in Oregon. Having cleared 2.03m to dethrone Mariya Lasitskene, Mahuchikh dedicated her victory to her country.

“Every competition, every win, is so important for me and for Ukraine,” she said. “Now, I am really like an ambassador of Ukraine on the track because I talk to many journalists and I have the chance to talk about Ukraine."

That Noah Lyles should take the men's 200m title came as little surprise,  but the manner in which he did so still left Zurich in a spin, as the American clocked 19.52 to break a ten-year-old meeting record which had previously been held by Usain Bolt. bLyles now has four Diamond Trophies to his name and, at 25, could well be on course to overtake Renaud Lavillenie and Christian Taylor's joint record of seven career titles.

Nigeria's Tobi Amusan also broke a meeting record, proving once again her ability to deliver when it counted after a Diamond League campaign which had been dominated by Jasmine Camacho-Quinn. Just a few weeks after her world record at the World Championships in Oregon, she stormed to 12.29 to claim her second successive Diamond Trophy.

Femke Bol also defended her title in the women's 400m hurdles, while Alison Dos Santos clocked 46.98 to crown an extraordinary year and win the title for the first time. “I am nearly invincible, and that is nice,” said the Brazilian as he clutched the Diamond Trophy he had been talking about winning for weeks.

Another athlete who ended his long wait for the Diamond League title was Soufiane El Bakkali, who eased to a fourth win of the season in the men's 3000m steeplechase to claim his first Diamond Trophy. The same went for men's 1500m winner Jakob Ingebrigtsen, who was among several athletes to post a world lead in Zurich.

Others, such as Faith Kipyegon and Shelly-Ann Fraser-Pryce, may need to invest in a bigger mantlepiece after their return from Switzerland. The Kenyan legend Kipyegon claimed her third Diamond Trophy with victory in the 1500m, while Jamaican star Fraser-Pryce made it five Diamond League titles with a meeting record of 10.65 in the women's 100m.