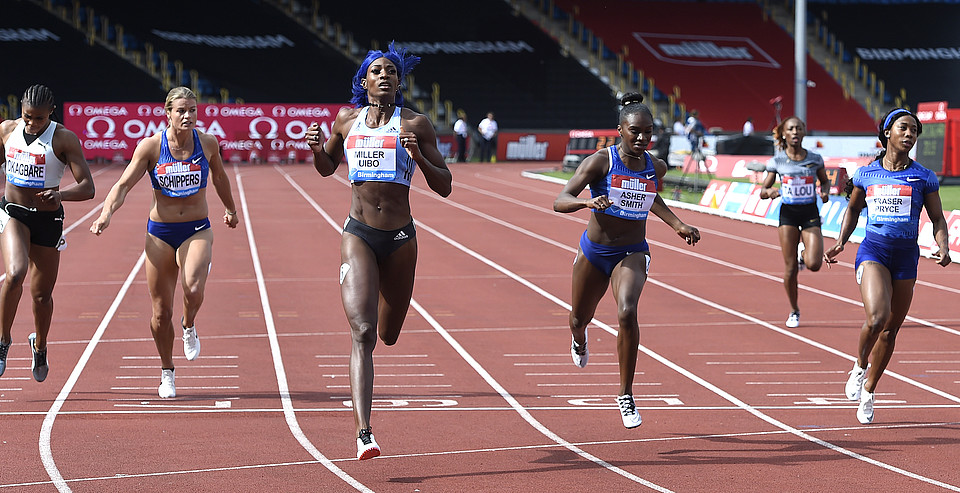 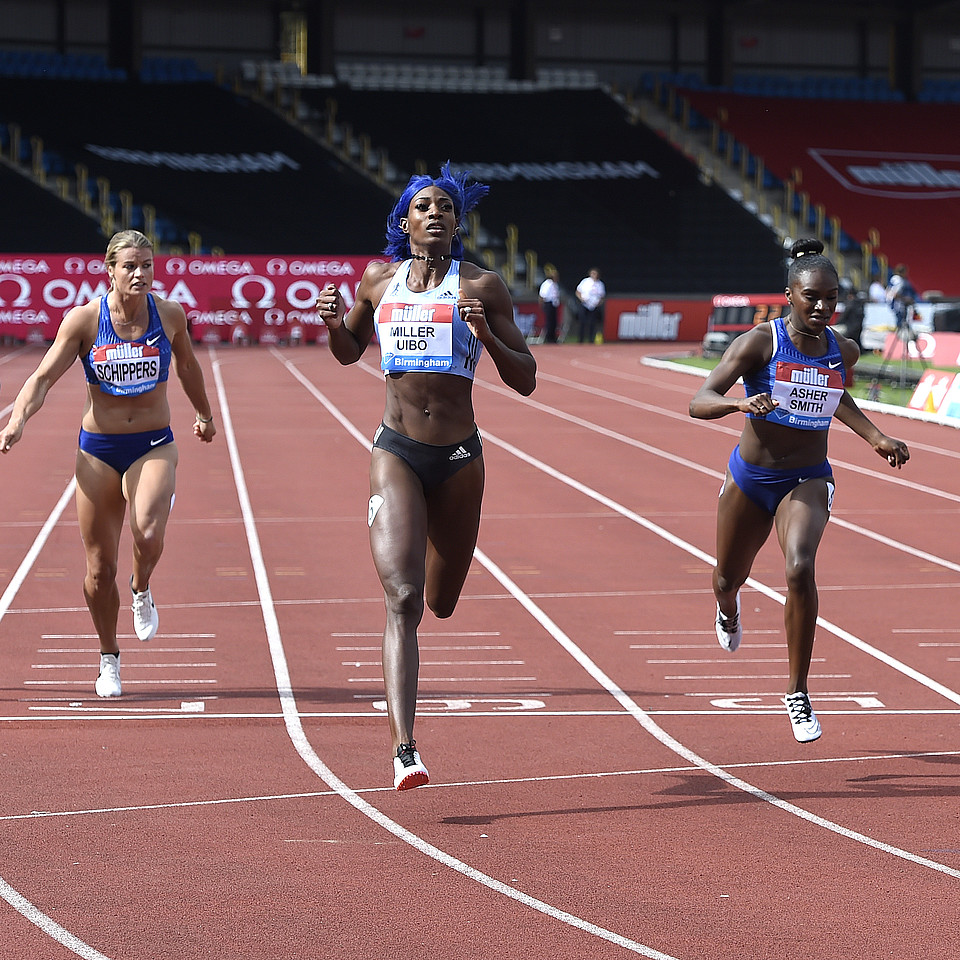 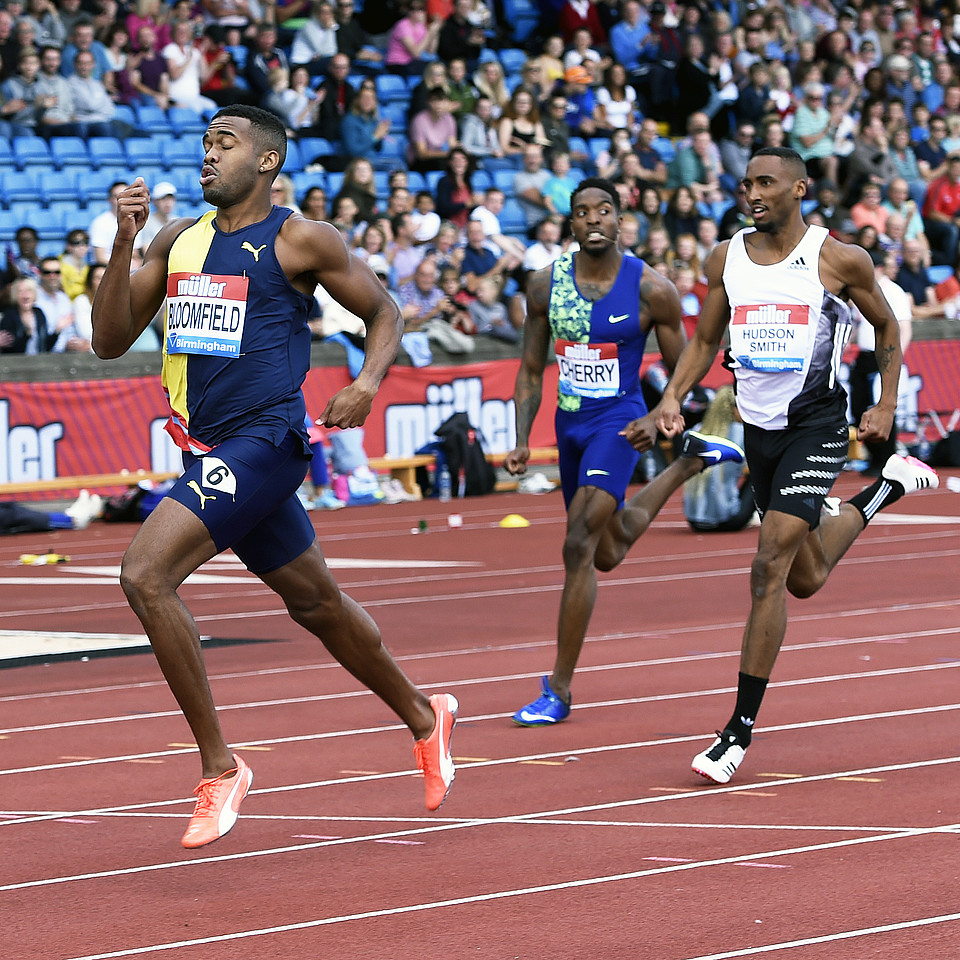 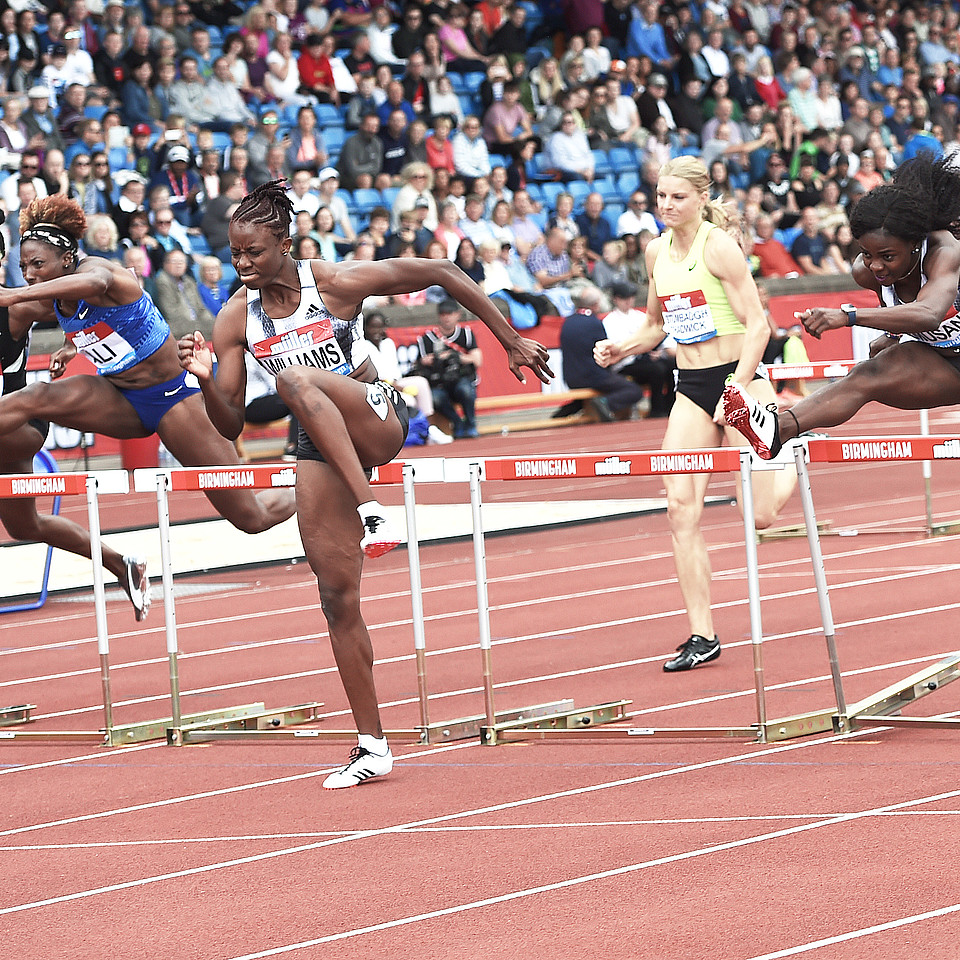 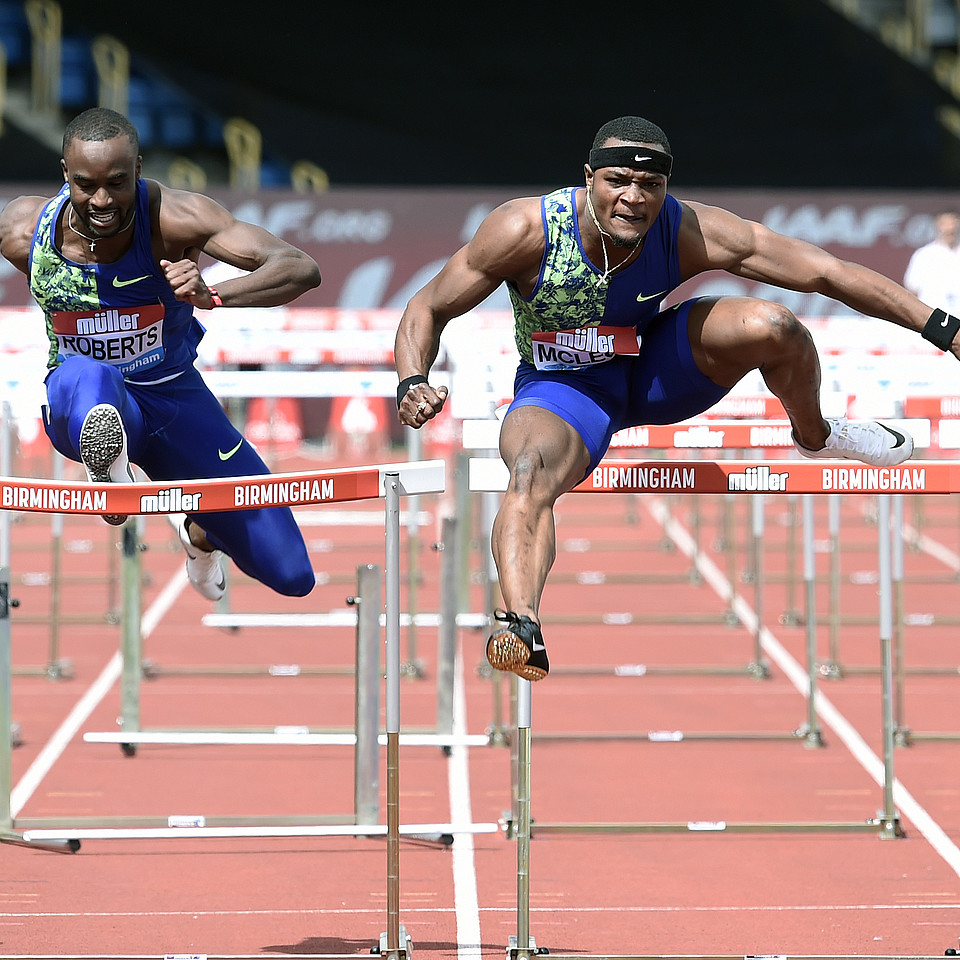 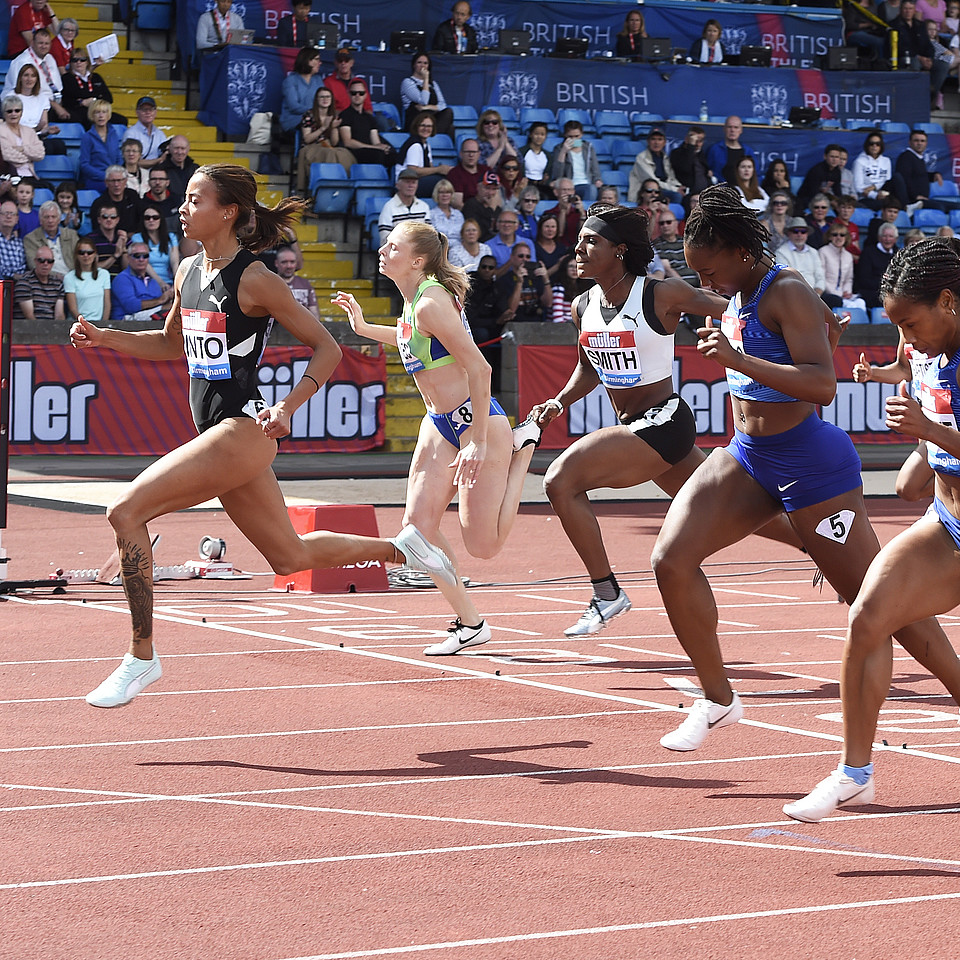 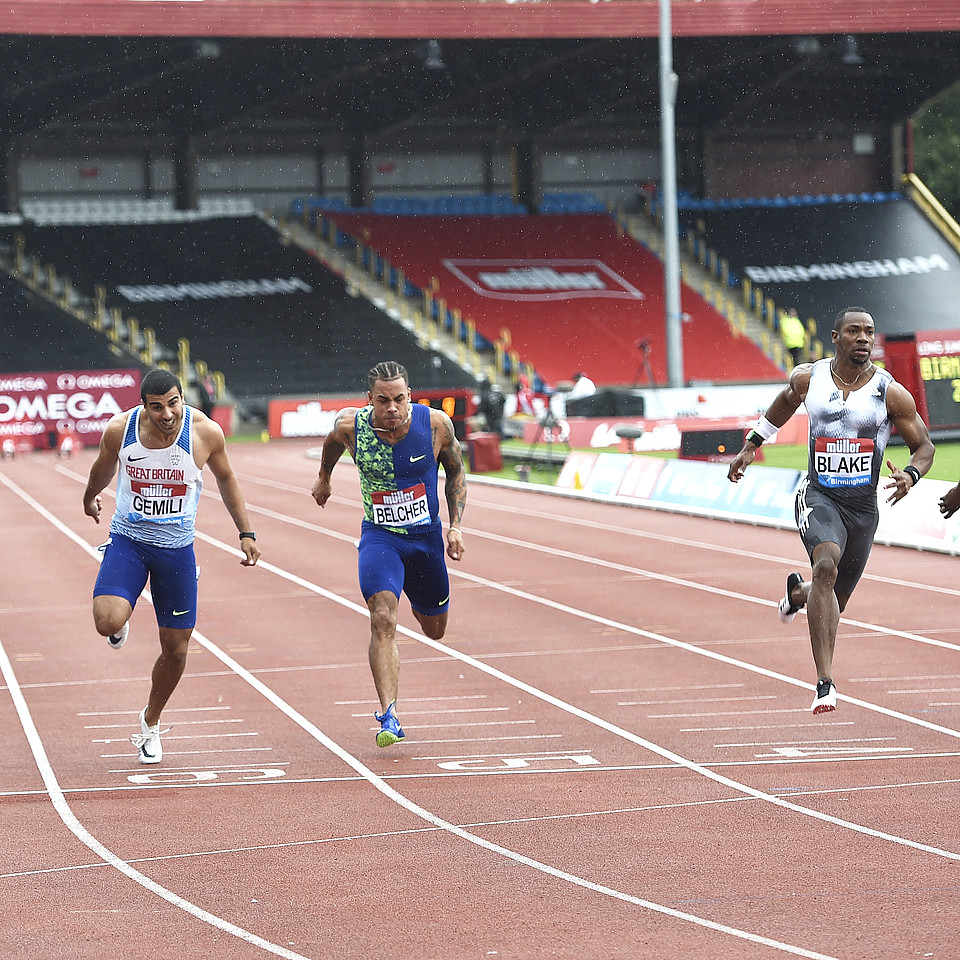 The two big headline events of the Muller Grand Prix did not disappoint as Shaunae Miller-Uibo and Danielle Williams came out on top in high-quality clashes at the IAAF Diamond League meeting in Birmingham on Sunday (18).

Miller-Uibo, the Olympic 400m champion from The Bahamas, had been caught by Dina Asher-Smith and Shelly-Ann Fraser-Pryce by the half-way stage while two-time world champion Dafne Schippers also looked poised to strike.

But the long-striding Miller-Uibo kept her cool and reeled in Asher-Smith and Fraser-Pryce down the home straight, replicating her victory from last year. She crossed the line in 22.24 (0.4m/s), which would have surely been quicker in warmer conditions and on a faster track.

Asher-Smith held on for second place in 22.36 with Fraser-Pryce completing the double-barrelled podium with 22.50. Schippers was a few strides behind in 22.81.

“The race didn't go to plan,” said Miller-Uibo, who set a meeting record of 22.15 when winning here last year. “My start was just horrible and I had to rely on that 400m strength to get through.

“I’m feeling good. Before the race we had an idea of how we wanted the race to go and it didn't go as planned so I’m happy for the win and ready to move on to the next.”

Williams’ win in the 100m hurdles was even more decisive. The Jamaican comfortably advanced from the heats earlier in the afternoon, but the same could not be said of world record-holder Kendra Harrison, who placed fourth in her heat in 12.93, only making it through as a non-automatic qualifier.

Harrison’s run in the final was much better and she was level with Williams at half way, but had no response as the Jamaican pulled away over the last few barriers.

Williams stopped the clock at 12.46, equalling Harrison’s meeting record from 2016. Harrison finished second in 12.66 with Tobi Amusan placing third in 12.71.

“To be honest, I didn't execute that well,” said Williams, the 2015 world champion. “I banged my knee on one of the hurdles, but I came away with the win so I’m happy. Every time I’ve been racing, I've been consistent with my times and that is the main thing for me.”

Harrison was simply pleased to be able to put her earlier run behind her.

“I struggled in the first round, but I was able to come back,” said the world indoor champion. “I was in lane two and she [Williams] couldn't see me and I couldn't see her, so I had to keep going because I knew she would keep pushing me. At the next Diamond League I hope we can be next each other and bring out a good performance.”

In what was possibly one of the closest ever men’s 100m races in IAAF Diamond League history, just 0.10 separated all eight finalists and 0.008 split the top two.

In the end, Jamaica’s 2011 world champion Yohan Blake was given the verdict over Britain’s Adam Gemili as both were timed at 10.07 (2.0m/s). USA’s Michael Rodgers was close behind in third place with 10.09.

Four weeks after his victory in London, Akeem Bloomfield completed the British IAAF Diamond League double, taking the 400m in Birmingham in 45.04. It was some way off his 44.40 season’s best but was comfortably enough for the Jamaican to win from USA’s Obi Igbokwe, who ran 45.53 to edge Britain’s Matt Hudson-Smith by 0.02.

Bloomfield’s win guaranteed him a spot in the IAAF Diamond League final, while USA’s Kahmari Montgomery and Michael Cherry, fourth and fifth respectively with 45.59 and 45.61, also did enough to qualify for the final.

It might not have been one of the fastest 400m hurdles races of the 2019 IAAF Diamond League, but it was certainly one of the closest with just 0.21 separating the top three. And in the absence of the world’s three fastest men, it was an opportunity for the best of the rest to move up the Diamond League leader board.

USA’s David Kendziera had a slight lead at half way, but Turkey’s Yasmani Copello came through in the final 100 metres to move into the lead. Brazilian youngster Alison Santos, who was down in sixth place at half way, finished strongly to take second place in 49.20, 0.09 ahead of Kendziera.

After an up-and-down start to his season, world and Olympic champion Omar McLeod showed his preparations for the IAAF World Athletics Championships Doha 2019 are back on track.

The Jamaican, who moved to Rana Reider’s training group just a matter of weeks ago, put together a strong race to win the non-scoring 110m hurdles in 13.21, winning by 0.10 from USA’s Freddie Crittenden. It was McLeod’s first win since the IAAF Diamond League meeting in Shanghai, which was followed by four successive defeats. “I’m in a new environment,” he said. “I feel like I’m ready to go again.”

Germany’s Tatjana Pinto passed two newly-crowned US sprint champions in the final stages of the women’s 100m to win in 11.15 (-0.9m/s). Dezerea Bryant, the US 200m champion, had the best start and was ahead of US 100m champion Teahna Daniels at half way. But Pinto came striding through in the closing stages to finish 0.06 ahead of Bryant with Daniels a further 0.03 in arrears.

Jon Mulkeen for the IAAF and the IAAF Diamond League