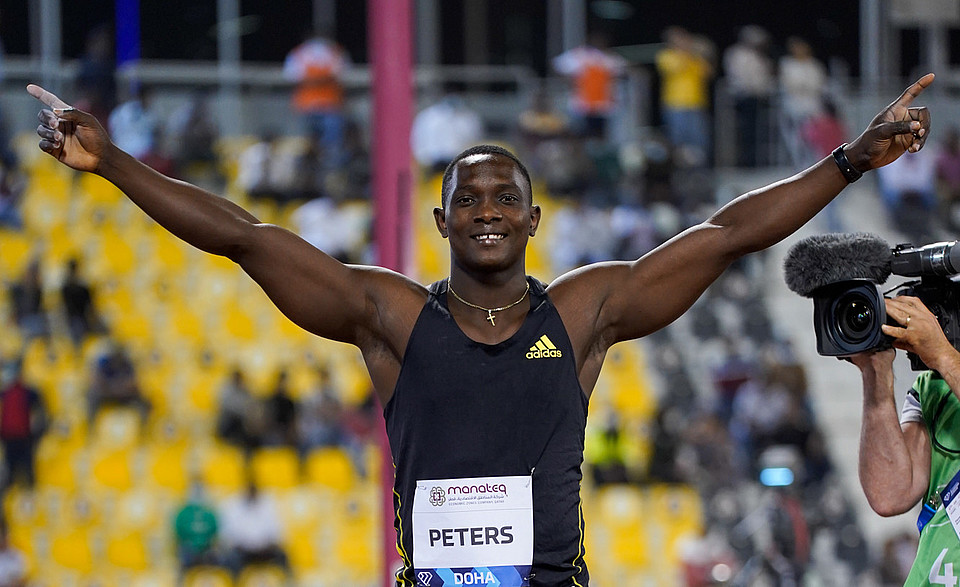 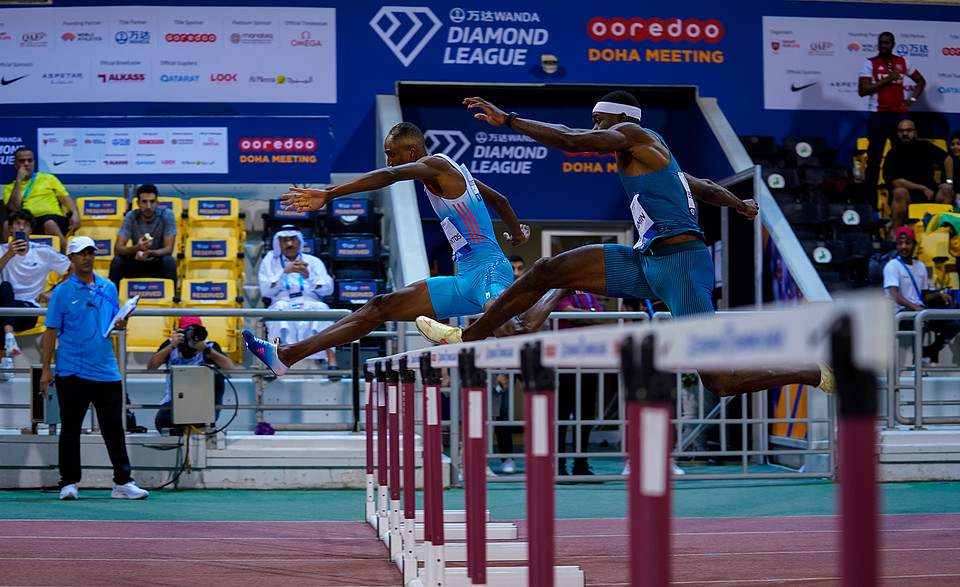 On an evening where strong winds hampered proceedings, some athletes at the Ooredoo Doha Meeting excelled on their Wanda Diamond League debut.

The date – Friday 13th – proved somewhat unlucky for the pole vaulters, whose event had to be cancelled due to the conditions and postponed until Saturday when the competition will be held indoors.

But others appeared almost unaffected by the stiff breeze at the Qatar Sports Club, not least Anderson Peters who prevailed in a thrilling javelin contest with a sensational 93.07m winning throw.

Returning to the city where he won the world title in 2019, the Grenadian made his intention known from the outset, opening his series with a national record of 88.96m, then following it with 87.30m and 88.51m.

Olympic silver medallist Jakub Vadlejch then took the lead in round four with a lifetime best of 89.87m, but Peters responded in the next round with 90.19m, another Grenadian record. Just moments later, Vadlejch hit back with an almighty leading 90.88m effort.

Vadlejch was up first to throw in the final round and closed out his series with an 85.50m effort. Peters then took to the runway and launched his spear high into the Doha night air. Instead of stalling, as many high throws tend to do, it simply continued to fly before piercing the ground farther than any other attempt this evening.

The distance – 93.07m – came up on the scoreboard and Peters burst into an impromptu dance, celebrating the fact he had become the fifth-best thrower of all time, breaking the North & Central American and Caribbean record in the process.

Germany’s Julian Weber finished third with 86.09m and Leandro Ramos set a Portuguese record of 84.78m in fourth, one centimetre ahead of Moldova’s Andrian Mardare.

The javelin was one of several highly competitive events in the Qatari capital.

Despite the late withdrawal of world bronze medallist Abderrahman Alsaleck (formerly known as ‘Samba’), the men’s 400m hurdles still served up an exciting clash between USA’s Rai Benjamin and Brazil’s Alison Dos Santos, the Olympic silver and bronze medallists respectively, and the second- and third-fastest men of all time.

Dos Santos got out strongly but then allowed Benjamin to take the lead down the back straight. Benjamin held pole position into the home straight but Dos Santos, looking ominously comfortable, drew level with the US sprinter over the final barrier and then charged for the line, crossing in 47.24.

It was the 21-year-old’s second-fastest time of his career, behind the 46.72 he clocked to earn bronze in Tokyo. It also erased the 47.38 meeting record that Benjamin set last year – which, at the time, was a revision of the 47.42 Qatari all-comers’ record set by Karsten Warholm at the 2019 World Championships.

“We prepared well and we started the season fast,” said Dos Santos, who last month set a 400m flat PB of 44.54. “I’m always trying to improve and be better.”

Benjamin finished second in a season’s best of 47.49 while Ireland’s Thomas Barr was a distant third in 49.67.

The strong winds finally died down in time for the women’s 200m – the only sprint event to register a legal wind reading – and it resulted in Gabby Thomas equalling Allyson Felix’s meeting record of 21.98.

The Olympic silver medallist was level with world champion Dina Asher-Smith and Olympic 100m bronze medallist Shericka Jackson for most of the bend, but began to edge ahead as she entered the straight. Jackson didn’t give up without a fight, but Thomas proved to be stronger at the end and crossed the line in 21.98 to hold off Jackson (22.07). Asher-Smith, making her seasonal debut at this distance, was third in 22.37.

“I was nervous, but I feel great now,” said Thomas. “It is such a great feeling to interact with the crowd here; it gives me good energy.”

The men’s 200m was even closer in a race where three global champions clashed.

Noah Lyles – like Peters, back in the city where he won world gold in 2019 – kept US compatriot Fred Kerley at bay, prevailing in 19.72. His time would have broken the meeting record had it not been for the marginally illegal wind reading of 2.1m/s. Kerley finished just 0.03 in arrears, while world indoor 400m champion Jereem Richards took third place in 20.15, just ahead of Olympic champion Andre De Grasse, who clocked the same time in fourth.

“I perform better under pressure,” said Lyles, “and the crowd makes me excited. I feel good and satisfied about where I’m at right now.”

Strong tailwinds are often more of a hindrance than a help in the sprint hurdles, and it nearly cost Kendra Harrison the victory as she hit the final barrier. But the world record-holder held on to win – just – in 12.43 (3.8m/s).
Nigeria’s Tobi Amusan and Britany Anderson finished equal second in 12.44.

In their first clash since the Tokyo Games, Olympic silver medallist Marileidy Paulino got the better of two-time Olympic champion Shaunae Miller-Uibo in the 400m.

Miller-Uibo took an early lead, but Paulino gained a slight advantage over the Bahamian at half way. Paulino continued to pull away in the second half and Jamaica’s Stephenie Ann McPherson closed on Miller-Uibo. Paulino eventually reached the finish line a clear winner in 51.20 from McPherson (51.69) and Miller-Uibo (51.84).

It was Miller-Uibo’s first loss at 400m since her last run in Doha, which was at the 2019 World Championships.

Olympic steeplechase champion Soufiane El Bakkali opened his 2022 campaign with victory in a world-leading time, though Lamecha Girma ensured the Moroccan had to work hard for it.

The field was paced through the first kilometre in 2:43.41 and they reached 2000m just inside 5:30. Kenya’s Abraham Kibiwott led for most of the final kilometre with El Bakkali and Girma tucked in close behind. El Bakkali then hit the front on the final lap, but Ethiopia’s world and Olympic silver medallist Girma drew level with 200 metres to go. The Moroccan had the edge at the end, though, and won by 0.01 in 8:09.66. Kibiwott was some way behind in third in 8:16.40.

In a race with no pacemakers, Niyonsaba dictated the pace for most of the way, the Burundian passing through 1000m in 2:56.1. World 5000m leader Girmawit Gebrzihair took a brief stint at the front, as did Kipyegon, but Niyonsaba hit the lead again with 600 metres to go. Kipyegon pulled level with Niyonsaba again with half a lap left, but Niyonsaba responded and kicked away to win in a world-leading 8:37.70.

Kenya’s world champion Timothy Cheruiyot, competing with strapping on the back of his legs, was beaten by younger compatriot Asbel Kipsang in the men’s 1500m.

The breezy conditions meant that fast times were out of the question, but it also possibly resulted in a more competitive outcome. Once the last of the pacemakers stepped off the track, Kipsang led from Cheruiyot in the closing stages. At one point on the home straight it appeared as though Cheruiyot would kick back, but Kipsang dug in and held on for victory in 3:35.70. Cheruiyot was second in 3:36.16.

The breezy conditions meant that fast times were out of the question, but it also possibly resulted in a more competitive outcome. Once the last of the pacemakers stepped off the track, Kipsang led from Cheruiyot in the closing stages. At one point on the home straight it appeared as though Cheruiyot would kick back, but Kipsang dug in and held on for victory in 3:35.70. Cheruiyot was second in 3:36.16.

World indoor silver medallist Chase Ealey led a US 1-2-3 in the women’s shot put. She opened with 18.84m but was overtaken by compatriot Maggie Ewen, who threw 19.32m in round two. Ealey responded with 19.51m, the eventual winning mark. Jessica Ramsey was third with 18.99m.