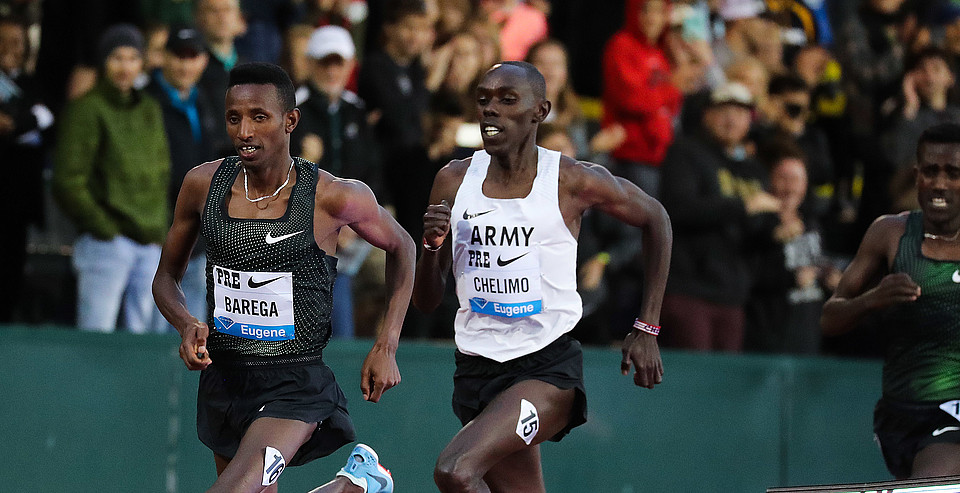 Selemon Barega leads an incredible field that includes seven of the world’s top 9 5k runners in the T&FN rankings.

That’s good news for fans and bad news for the rest of the field. In addition to his Pre Classic 2-mile victory last year, he was merely 18 when finished No. 1 in the Track & Field News annual world rankings for 2018.

He leads an incredible field that includes seven of the world’s top 9  5k runners in the T&FN rankings.

Amazingly, three in the field (including Barega) are still eligible for World Junior (U20) records. The 2-mile distance is a short race for the world’s best 5k runners. The Pre Classic 2-mile record of 8:03.50 – set in 2007 by Australian Craig Mottram – remains the fastest run on U.S. soil.

Barega achieved his most impressive performance last summer by winning the Diamond League 5k title in 12:43.02, a time bettered only by the last three world record setters – two of whom ran before he was born. He led a 1-5 Ethiopian sweep that included two former Diamond League champions.

Barega – now 19 – first came to prominence in 2016 by winning the world Junior 5k gold, then made the London World 5k final as a 17-year-old – his 5th place finish matched his first T&FN world ranking at No. 5 – before taking World Indoor silver last year as the 3k’s youngest-ever medalist.

Earlier this year Barega displayed a longer side, finishing 5th in the World Cross Country Championships in March. Last month, he won the Ethiopian 10k title in his debut at the distance, running 28:23.7 in the very high altitude of Addis Ababa (7697 feet/2346m).

Paul Chelimo, 27, is the only racer in the field with medals in the 5k from Rio and the London World Championships. His Olympic 5k silver was the first medal by an American since Bob Schul won the 1964 Tokyo Olympics. In London, Chelimo matched the blazing final lap of gold medalist Muktar Edris and was edged out of a silver by legend Mo Farah for a bronze.

He racked up his third-straight top-4 world ranking by T&FN last year – the first time an American has had three consecutive top-4 ranked seasons. Chelimo is No. 4 all-time American in both the 5k and 3k. He was 2nd in last year’s Pre Classic 2-mile, and his radar includes the American best of 8:07.07 set by Matt Tegenkamp in the 2007 Pre Classic.

Bahrain’s Birhanu Balew, 23, made his first T&FN world rankings last year at No. 2. He was the only runner to beat Barega on the Diamond League circuit last summer and finished 3rd in last year’s Pre Classic 2-mile. He won his first Asian Championships gold in April in the 5k.

Ethiopian Hagos Gebrhiwet, 25, was the Diamond League champion in 2016 and is tied for the most T&FN world rankings in the field with five – starting in 2012 at age 18. He also has the field’s most major medals with three – bronze in Rio and the Beijing Worlds after a silver in the Moscow Worlds. He was the previous world Junior record holder in the 5k and still holds the indoor 3k record. This weekend he ran 12:54.92 in the Rome 5k a week after debuting in the 10k at 27:01.02.

Canada’s Mo Ahmed, 28, lowered the Canadian 5k record into sub-13 territory with a 12:58.16 late last week. He has been world-ranked by T&FN five times, matching Gebrhiwet for most in the field. The last two years Ahmed has ranked in two events, and his No. 2 in the 10k last year matched the best ever by a Canadian long-distance track runner since Bruce Kidd’s No. 2 in the 1962 5k. Ahmed just missed a medal in Rio, finishing 4th in the 5k behind Gebrhiwet. The Wisconsin grad is Canada’s record holder at 3k, 5k and 10k as well as the 2-mile.

Getaneh Molla, 25, made his first T&FN world ranking last year at No. 8 in the 5k and earned a silver in the African Championships. This year he has embarked on longer journeys, starting with a debut in the marathon at 2:03:34 to win in Dubai in January to make him the fourth-fastest Ethiopian of all-time. Last year Molla was 5th in the IAAF Half-Marathon World Championships and won Colorado’s BOLDERBoulder 10K.

Henrik Ingebrigtsen, 28, will watch his two younger brothers – Filip and Jakob – try to break his family record of 3:50.72 in the Bowerman Mile as the trio continues to fascinate fans well beyond the borders of Norway. Henrik has the most European medals in the family with seven – starting with a gold in 2012 (1500) and most recently a bronze in March (3k). His 5th place in the London 1500 is the best Olympic finish by a Norwegian in that event. He set the national 2-mile best in last year’s Pre Classic at 8:22.31.

Joshua Cheptegei, 22, of Uganda won the world cross country championships in March and was silver medalist in the London World 10k. He was No. 1 in T&FN’s 10k world rankings last year and is Uganda’s second-fastest runner at 10k and 3k. He swept 5k/10k gold at last year’s Commonwealth Games.

Fellow Ugandan Jacob Kiplimo, 18, made it a 1-2 sweep of medals at the world cross country championships. He won the Junior race in 2017 when it was held at home. Last summer he earned silver in the world Junior 10k after a bronze in 2016. Last month he won the Great Manchester Race road 10K by almost a minute in 27:31.

Stewart McSweyn, 24, became Australia’s second-fastest at 5k and 3k last year, following Mottram on both all-time lists. In February he ran 3:35.10 indoors, fastest under cover by anyone ever from Oceania.

Paul Kipngetich Tanui, 27, earned Olympic silver in Rio at the 10k and took a third-straight World Championships bronze last summer in London. He has more than 100 laps of Pre Classic racing in his career.