Jumps - What's At Stake In Birmingham And Paris 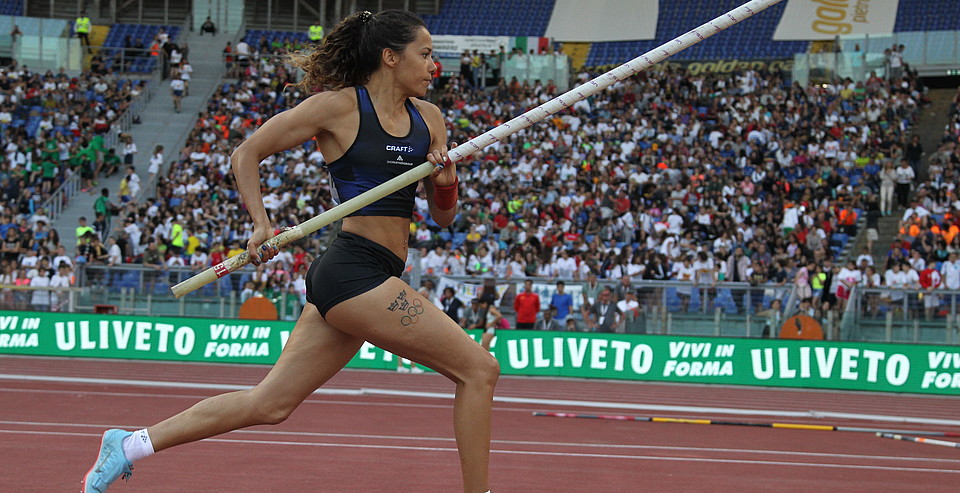 Who will skip, hop, jump and vault their way into the Diamond League Final? The final meetings on the Road To The Final are nearly upon us, so here is a breakdown of who can still qualify in the jumps in Birmingham and Paris.

The jumps produced some of the most exciting Diamond League Finals of all last year, with Timur Morgunov springing a surprise in the men's pole vault and Caterine Ibargüen completing an astonishing triple and long jump double on back to back days.

So who will be in the running (or the jumping) for the Diamond Trophy this season? In some disciplines, that much is already decided. The Road To The Final is now complete in the women's high jump, men's long jump and men's pole vault, <link https: www.diamondleague.com iaaf-diamond-league external-link-new-window internal link in current>and you can check out the full provisional list of finalists for these disciplines here.

In the other disciplines, there are still qualifying spots up for grabs, so here is your discipline-by-discipline breakdown of who needs what in Birmingham and Paris.

There will be points on offer at both Birmingham and Paris in the men's high jump, but that doesn't matter a jot to Ilya Ivanyuk, Majd Eddin Ghazal and Bogdan Bondarenko, because they have all already picked up enough points to secure qualification.

It is a different for Maksim Nedasekau and Diamond Trophy holder Brandon Starc, but with 13 and 12 points respectively, few would bet on them dropping out of the top 12.

There are some big names further down, however. Multiple Diamond Trophy winner Mutaz Essa Barshim still only has seven points to his name, having only returned from injury at London last month, while Gianmarco Tamberi is just a point clear of the non-qualification spots in tenth.

The women's pole vault will also be at both Birmingham and Paris, but in contrast to the men's high jump, the biggest names have already booked their tickets to the Final, with Kat Stefanidi, Sandi Morris and Anzhelika Sidorova all having wrapped up qualifcation. Angelica Bengtsson is also on course to qualify thanks to her surprise victory in Rome, as are Katie Nageotte, Yarisley Silva and 2015 Diamond Trophy winner Nikoleta Kiriakopoulou.

Holly Bradshaw and Alysha Newman are the biggest names who may still have cause for concern, with both sitting just five points above 13th place and the non-qualification places. Barring a surprise performance from an unlikely athlete, however, they too should make the final comfortably.

Birmingham could prove to be explosive in the women's long jump. Maryna Bekh-Romanchuk has already qualified for the final, as have absentees Caterine Ibargüen and Malaika Mihambo, but beyond those three, there are some big names still battling it out to make the top eight.

Lorraine Ugen will be in Birmingham to defend her place in the top eight, while several top level athletes are currently sitting outside the qualifying places and in desperate need of points if they are to make the final.

Chief among them is two-time Diamond Trophy winner Ivana Spanovic, who is currently in ninth, two points short of a qualifying spot. Like Spanovic, Katarina Johnson-Thompson and Sha'Keela Saunders will also be looking to muscle in on the top eight with a strong performance in Birmingham.

Aside from those disciplines mentioned above, Paris will see the final stage of both the men's and women's triple jump, with three places in the women's final and five in the men's still yet to be filled.

Pedro Pablo Pichardo and Christian have of course already qualified in the men's triple jump thanks to victories in Monaco and London, while Hugues Fabrice Zango has also picked up enough points with three podium finishes so far this year.

Donald Scott and Omar Craddock look reasonably sure to join them, while names as big as Will Claye, Nelson Evora and Alexis Copello may still be biting their nails with just two or three points separating them from the non-qualifying spots. Among those with a chance of unseating them and breaking into the top eight are Nazim Babayev, Benjamin Williams and Andy Diaz.

The usual suspects have also already qualified in the women's triple jump, with Diamond Trophy holder Caterine Ibargüen, world champion Yulimar Rojas and Jamaicans Shanieka Ricketts and Kimberly Williams all having secured their place in the final.

Liadagmis Povea is also through after her fine performance in Monaco, leaving just three places up for grabs, which are currently occupied by Olha Saladukha, Paraskevi Papachristou and Keturah Orji.

None of those athletes can rest on their laurels, however, because lurking just outside the top eight with a surprisingly low three points to her name is 2018 Diamond Trophy winner Olga Rypakova. The Kazakh star would have to pick up at least four points (i.e. come fourth) in Paris to qualify from here, but she would certainly be capable of doing so.