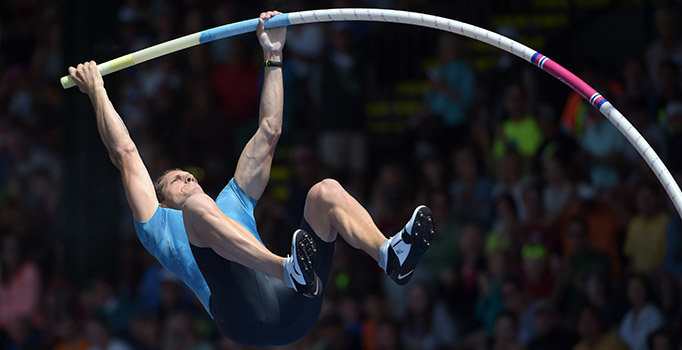 World record holder Renaud Lavillenie leads a star-studded pole vault field at the Prefontaine Classic, where all eight of the world’s best are lining up on the road to the Rio Olympics.

Renaud Lavillenie has etched his name among the best-ever pole vaulters.  One of only two members of the 20-foot club (along with the legendary Sergey Bubka), he has dominated the event like few others with a 6th straight No. 1 world ranking byTrack & Field News.  Among contemporaries from all events, Lavillenie’s record shines  brightest as the only 6-time winner of the IAAF Diamond Race (no one else has won more than 4 in any event).

Still, Lavillenie seeks history on another major level – the London Olympic gold medalist can become only the second two-time Olympic champion in this event with a victory in Rio in August. (American Bob Richards won 1952 and 1956 Olympic golds.)  The French star, 29, has won the last three Pre Classics, capped by last year’s clearance of 19-10¼ (6.05) – his best outdoor vault anywhere.

Lavillenie’s competition at the Pre Classic will be as good as it gets.  The 8-man field consists of all of the top 8 from the 2015 T&FN world rankings, with each of Lavillenie’s opponents having at least one career win over him.

The youngest is Shawn Barber, who won last year’s World Championships gold medal in Beijing at age 21.  That victory made him the youngest world champion in the event since Bubka, who won the inaugural feature in 1983 at age 19.  Barber kicked off 2016 by becoming the youngest-ever member of the elite 6-meter club (19-8¼).

Barber turned pro last August after his World Championships gold in Beijing, with a year of collegiate eligibility remaining at the University of Akron.  He set four collegiate indoor records last year, swept the NCAA indoor and outdoor titles and was a finalist for The Bowerman Award.  Despite a short international season, he was ranked No. 2 in the world last year by T&FN.

Born in Las Cruces, New Mexico, Barber is a dual Canadian and American citizen who competes for Canada.  He graduated from Kingwood Park High near Houston, Texas, where as a senior he set the still-standing national high school record of 18-3½ (5.57) in 2012.  Barber will turn 22 on May 27, the day before the Pre Classic vault is held.

Sam Kendricks is rated as America’s best hope for an Olympic medal, a feat last seen in 2004 when the U.S. went 1-2.  Now 23, Kendricks has won the last three U.S. titles (two outdoor, one indoor) and at No. 7 last year is the youngest American to rank among the T&FN  world top 10 in this event since Joe Dial in 1985.

As a collegian, the Mississippi star had memorable battles with Barber, especially in 2014 when they twice went 1-2 at nationals (Barber winning the indoor, Kendricks the outdoor).

Raphael Holzdeppe of Germany has won two major medals over Lavillenie.  His most important was to win the 2013 World Championships in Moscow, and he added a silver at Beijing last summer ahead of Lavillenie’s co-bronze.  Holzdeppe, 26, has ranked among the world’s top 5 by T&FN  three times, topped by a No. 3 in 2013.  He is a former World Junior champion and record holder.

Poland’s Pavel Wojciechowski and Piotr Lisek shared bronze medals with Lavillenie at Beijing last summer. Wojciechowski, 26, won the 2011 World Championships in Daegu as a 22-year-old and last year enjoyed his best vaulting since the ’11 season, when he became the highest-flying Pole at 19-4¾ (5.91) and was ranked No. 2 in the world by T&FN.  Lisek, 23, was ranked No. 3 in the world last year by T&FN.

Konstantinos Filippidis of Greece is the reigning world indoor champion and was ranked No. 4 in the world by T&FN  last year.  The 29-year-old has ranked among world’s top 6 every year since 2011, led by a No. 2 in 2014.

Tickets for the 42nd annual edition of the Prefontaine Classic, to be held May 27-28 at Hayward Field in Eugene, Ore., are available now at www.GoDucks.com as well as from 1-800-WEBFOOT.  Sponsored by NIKE continuously since 1984, the Prefontaine Classic will be shown live to an international audience and by NBC Sports.