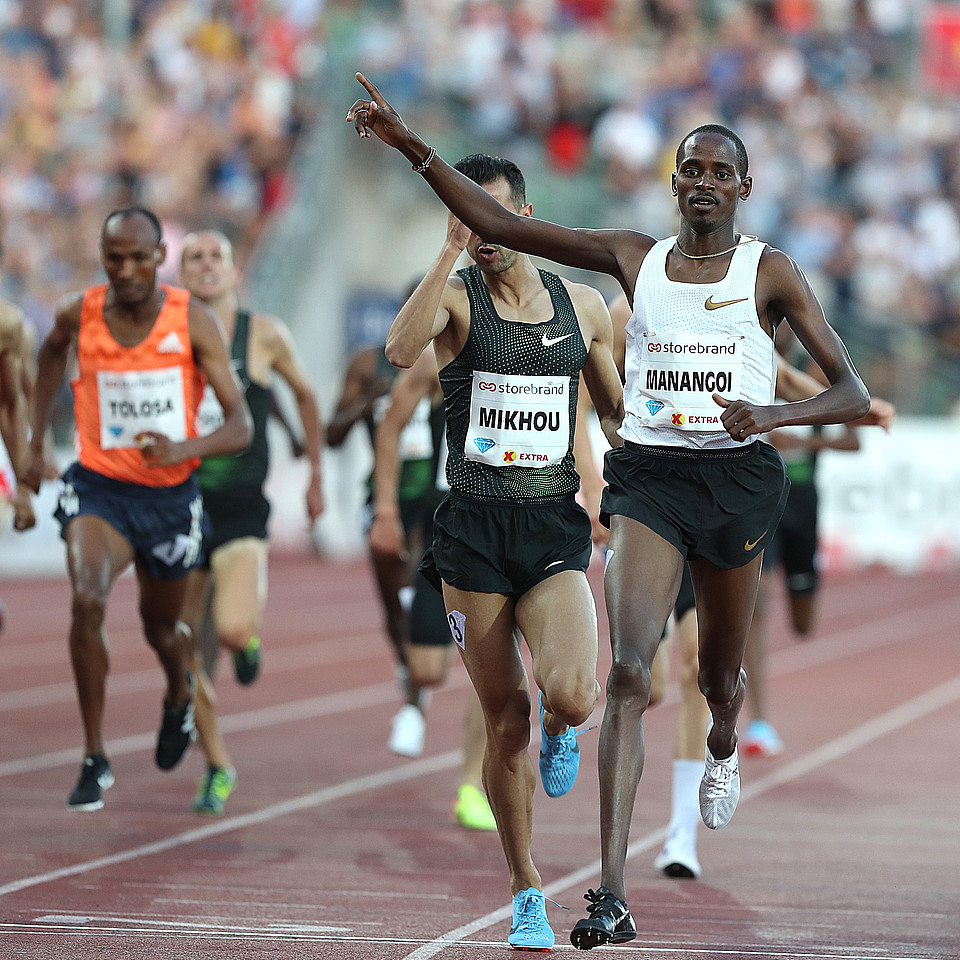 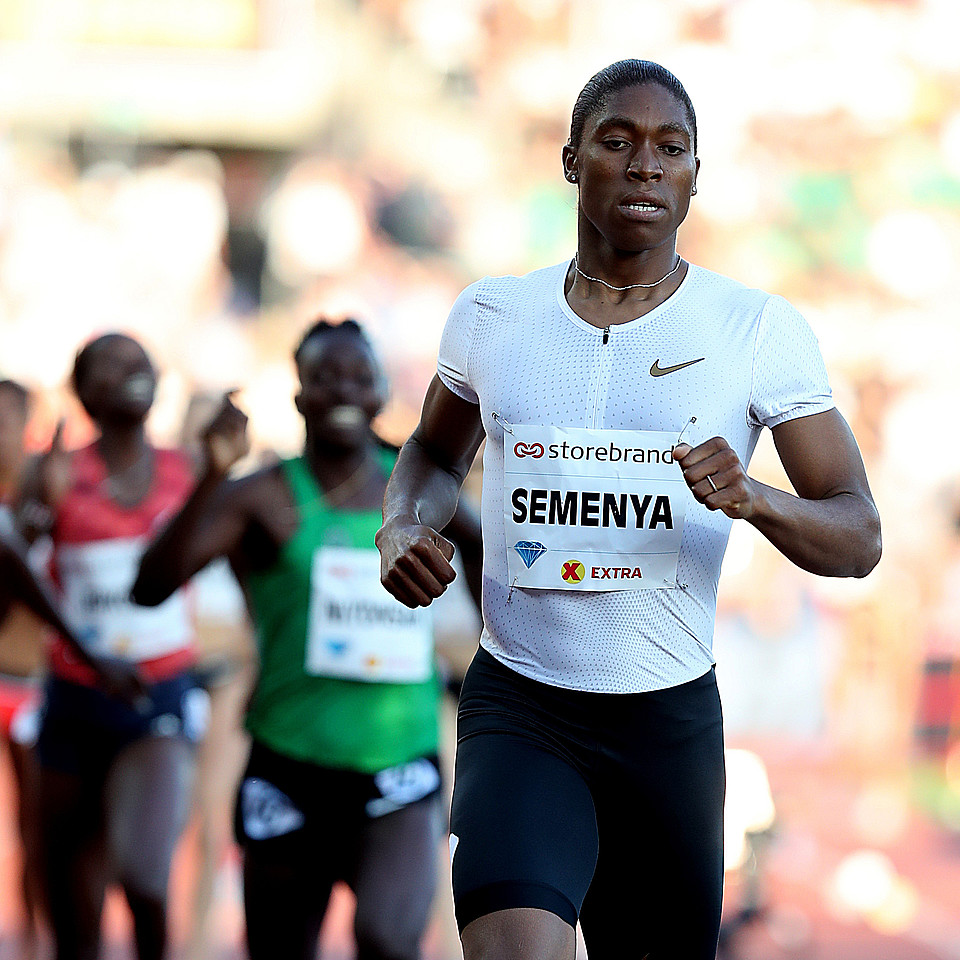 World 1500m champion Elijah Manangoi returned to top form with an excellent victory in the Dream Mile at the Bislett Games on Thursday night (7), the fifth meeting of the 2018 IAAF Diamond League.

The Kenyan timed his effort to perfection, utilising his considerable range of gears from the front on the final lap to hold off Sadik Mikhou of Bahrain in 3:56.95, with Mikhou taking second in 3:57.10 and Ethiopia’s Taresa Tolosa third in 3:57.92.

Not a soul had left a packed Bislett Stadium as the final event of the night began in broad daylight shortly before 10pm, Norwegian hopes pinned on brothers Henrik and Filip Ingebrigtsen.

The first 800 metres was covered in a steady 1:57.93, but the pace slowed in a major way on the third lap, covered in 64.24 seconds, as athletes looked at each other and recharged for the final kick. And while world 1500m bronze medallist Filip Ingebrigtsen made a bold bid to mix it with Manangoi when the pace was ratcheted up in the back straight, in the end he had no response after recent injuries and had to settle for fourth in 3:57.97, with Henrik Ingebrigtsen coming home sixth in 3:58.46.

“It’s a special feeling to win the Dream Mile,” said Manangoi. “It was a tough race, although it looks easy. I wanted to attack in the last 100 metres and that’s what happened.”

Earlier in the night Caster Semenya continued her peerless performances with another facile victory in the women’s 800m, the South African coasting behind the pacemaker as 400m was reached in 57.52. Semenya led throughout the final 300 metres, and only decided to hit the gas with 100 metres to run, coming home supreme once again in 1:57.25 to notch her 24th straight victory over the distance. Francine Niyonsaba took second with 1:58.57, with Ethiopia’s Habitam Alemu third in 1:58.58.

Afterwards she revealed she had been after a quicker time, one which will have to wait for the Paris Diamond League later this month, where she will race 800m before stepping up to 1500m in Lausanne. “I expected a better pace, maybe 55, but it did not happen,” said Semenya. “I was ready for a faster time but 1:57 is not bad. But I’m enjoying winning all the races and the times will come.”

A chaotic women’s 3000m steeplechase provided some level of answer to the question about what would have happened last week in Rome when world champion Emma Coburn came to grief at the final water jump. This time around, it boiled down to a head-to-head clash with Hyvin Kiyeng of Kenya – her conqueror that day – and Kiyeng proved that Rome win was no fluke.

After a swift opening kilometre of 3:01.80, the pace slowed considerably and 2000m was reached in 6:09.42. Soon after the Kenyan seized command, opening an eight-metre lead on Coburn on the final lap, which the American began to close around the last turn. Kiyeng was all out down the home straight to hold off Coburn, but that she did, 9:09.63 to 9:09.70, with Daisy Chepkemei third in 9:16.87.

“It was all about the win, I was not thinking about times at all,” said Kiyeng. “I had some injuries in Rome and wanted to continue winning. Fast times will come in July.”

World silver medallist Courtney Frerichs finished fourth with Commonwealth champion Aisha Praught fifth, both athletes hampered badly by an early barrier which was set to the wrong height, a mistake that was rectified minutes later by officials after Coburn – and her husband Joe Bosshard – did their best to bring it to their attention.

“After the stress, the pace slowed down a lot but today was a step in the right direction for me,” said Coburn. “I hope to come back here again and next it will take a perfect night and all of the stars to align for me to run sub-nine minutes but I’m hopeful – maybe in Monaco.”

In the men’s 1500m, a non-Diamond League event, Britain’s Chris O’Hare spoiled the Norwegian party that had begun to break out with 300m to run, the point at which 17-year-old Wunderkind Jakob Ingebrigtsen seized control at the front after the pacemakers dropped out following a 2:54.39 first 1200m.

Ingebrigtsen led into the final bend but O’Hare changed gears with alacrity with 120 metres to run, taking the lead and battling bravely up the home straight to fend off the challenge of Ingebrigtsen and Robby Andrews. O’Hare was all out to the line to hold on in 3:35.96, inches ahead of Andrews (3:36.05), with Ingebrigtsen having to settle for third on this occasion, rewarded with a PB of 3:36.06.

“I’ve had a rough six months as I’ve been injured,” said O’Hare. “I wasn’t invited into the Dream Mile so I wanted to prove myself and I did.”

At an event renowned for its rich history, it was heartening to see a sell-out crowd fill the stadium for the first time in several years, the sure sign of an athletics meeting in rude health.

Cathal Dennehy for the IAAF