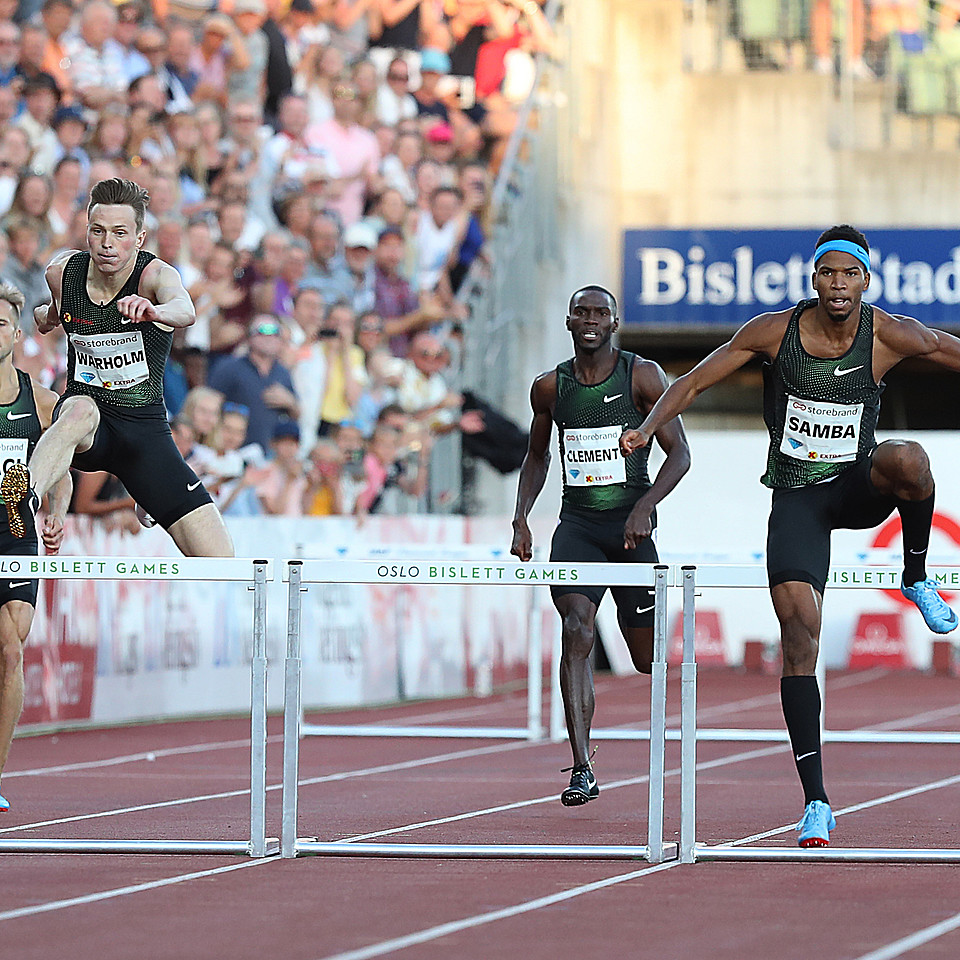 Abderrahman Samba (QAT) set a Meeting Record of 47.60 in the Men's 400m Hurdles at the 2018 Oslo Bislett Games © Giancarlo Colombo 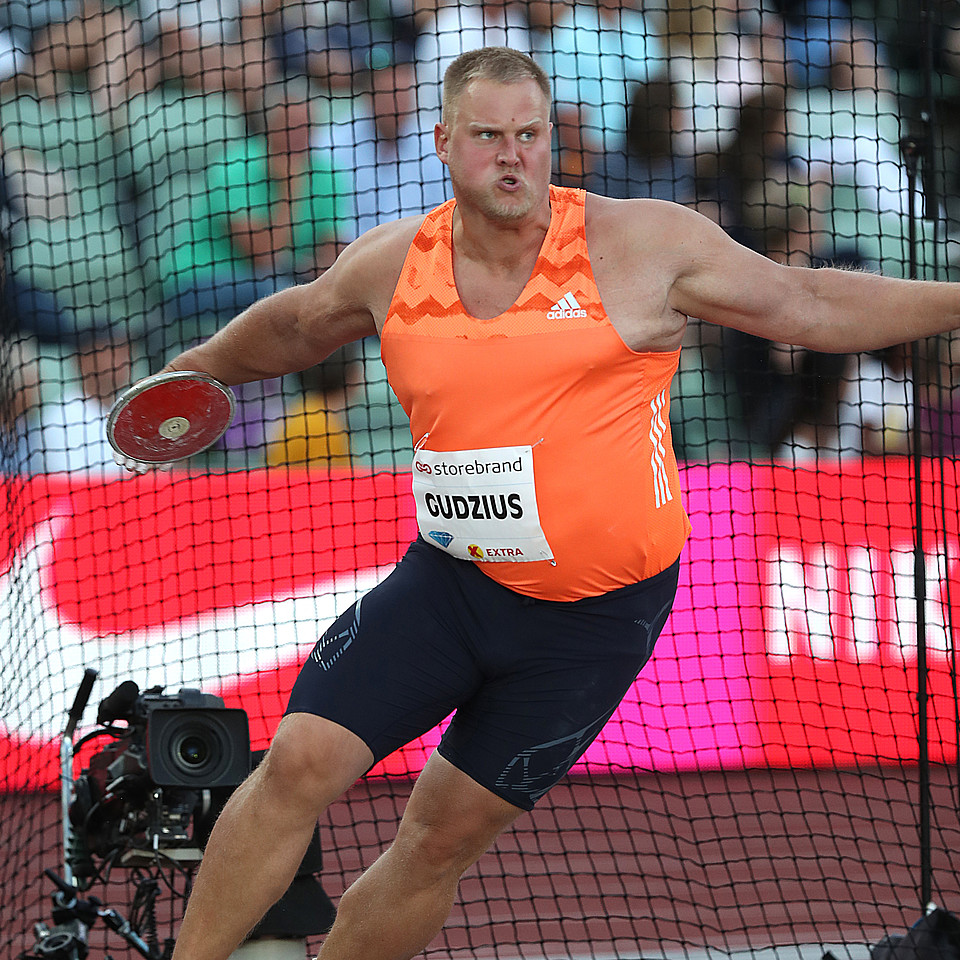 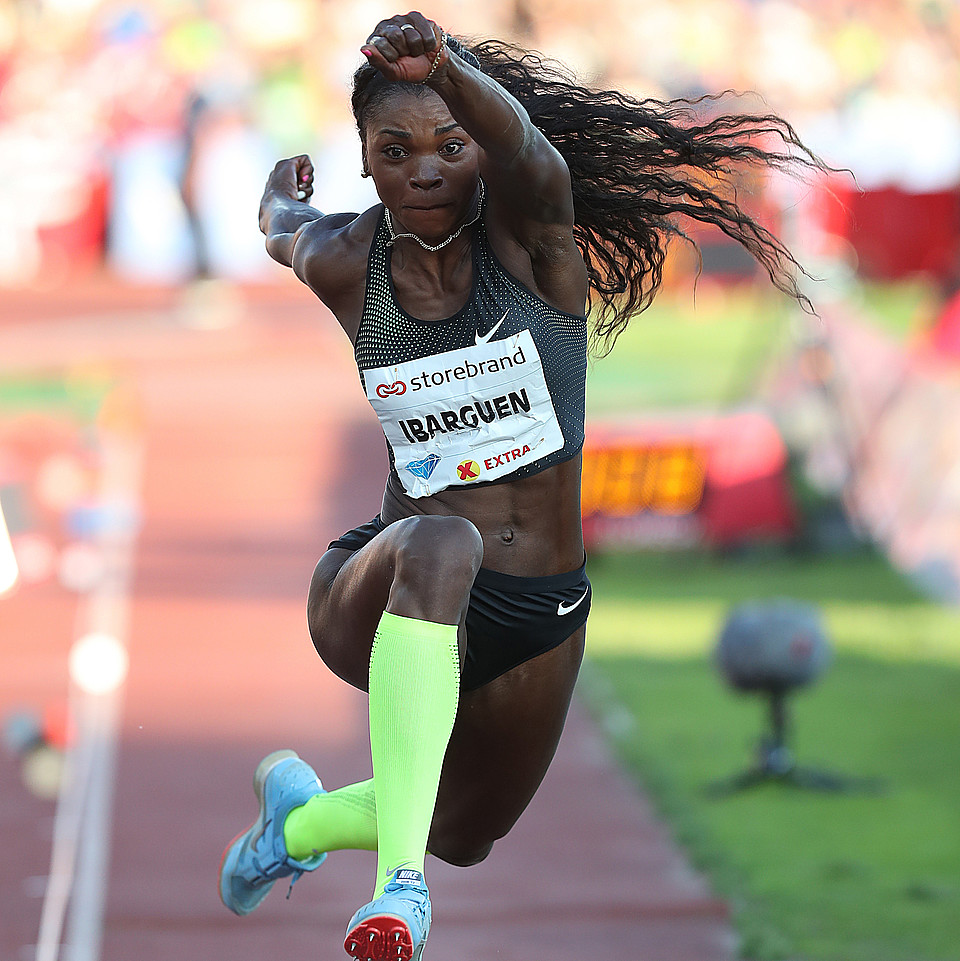 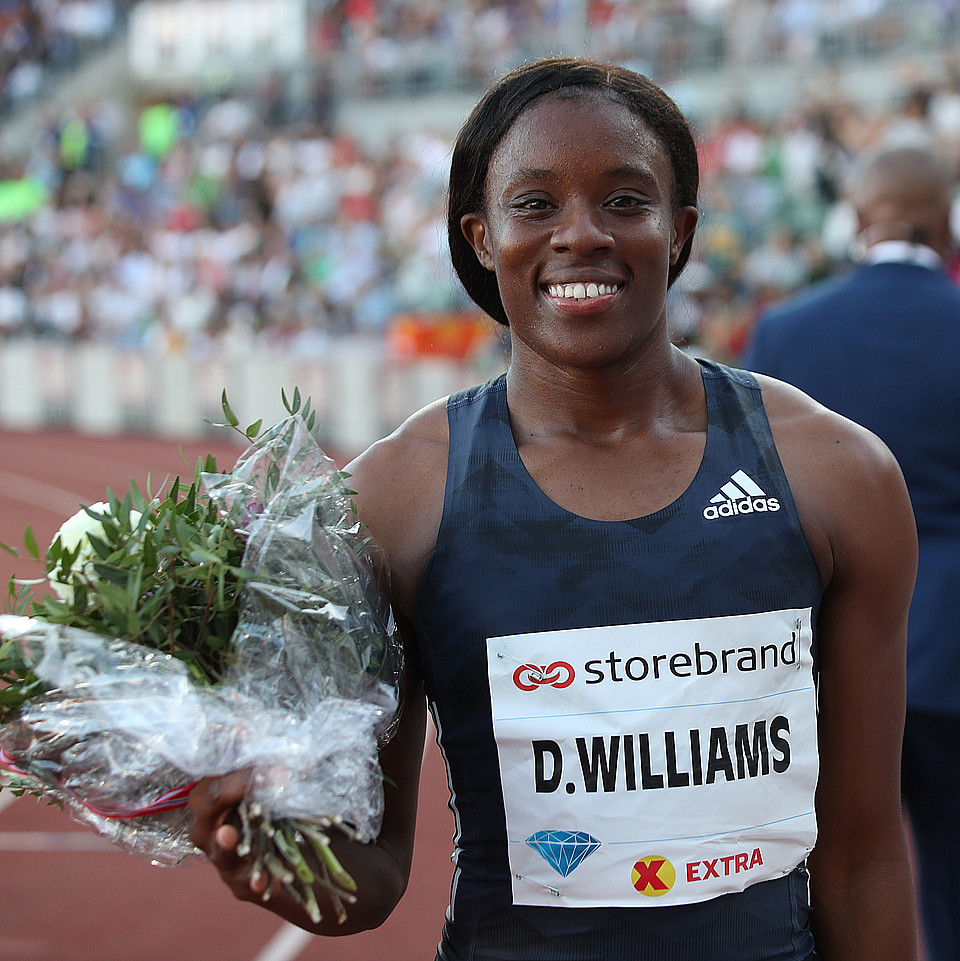 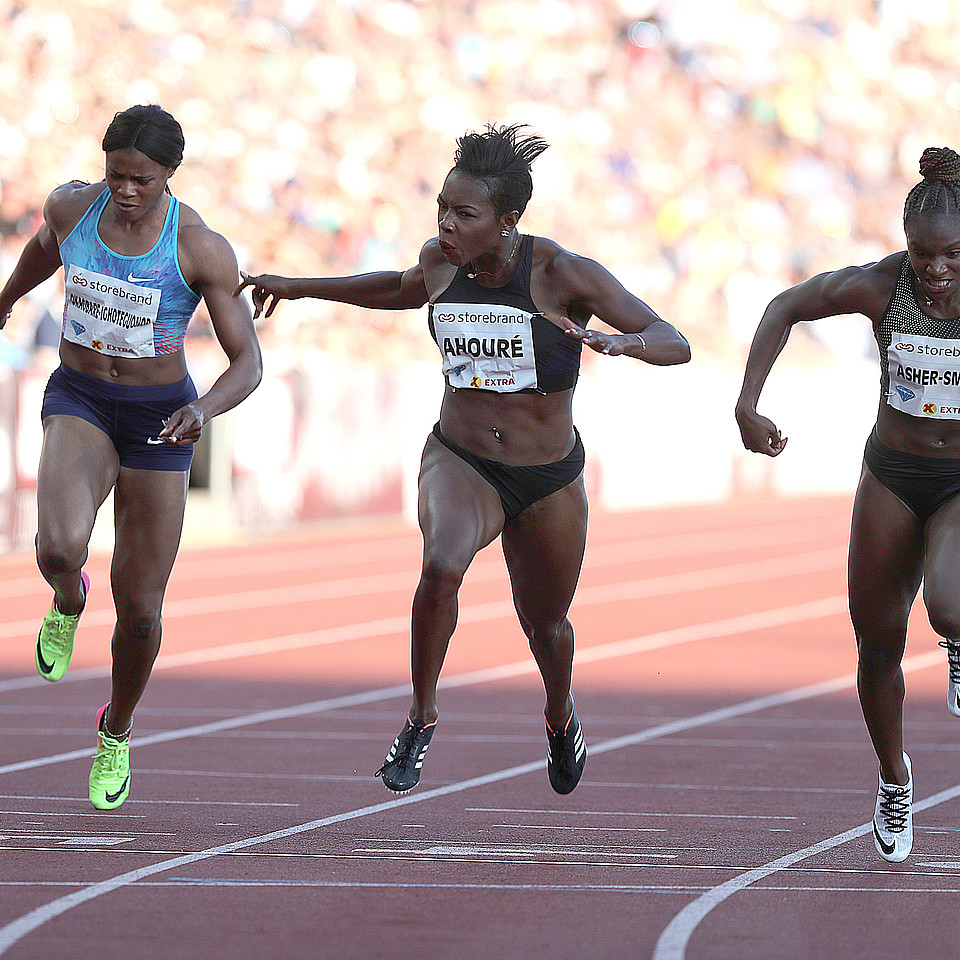 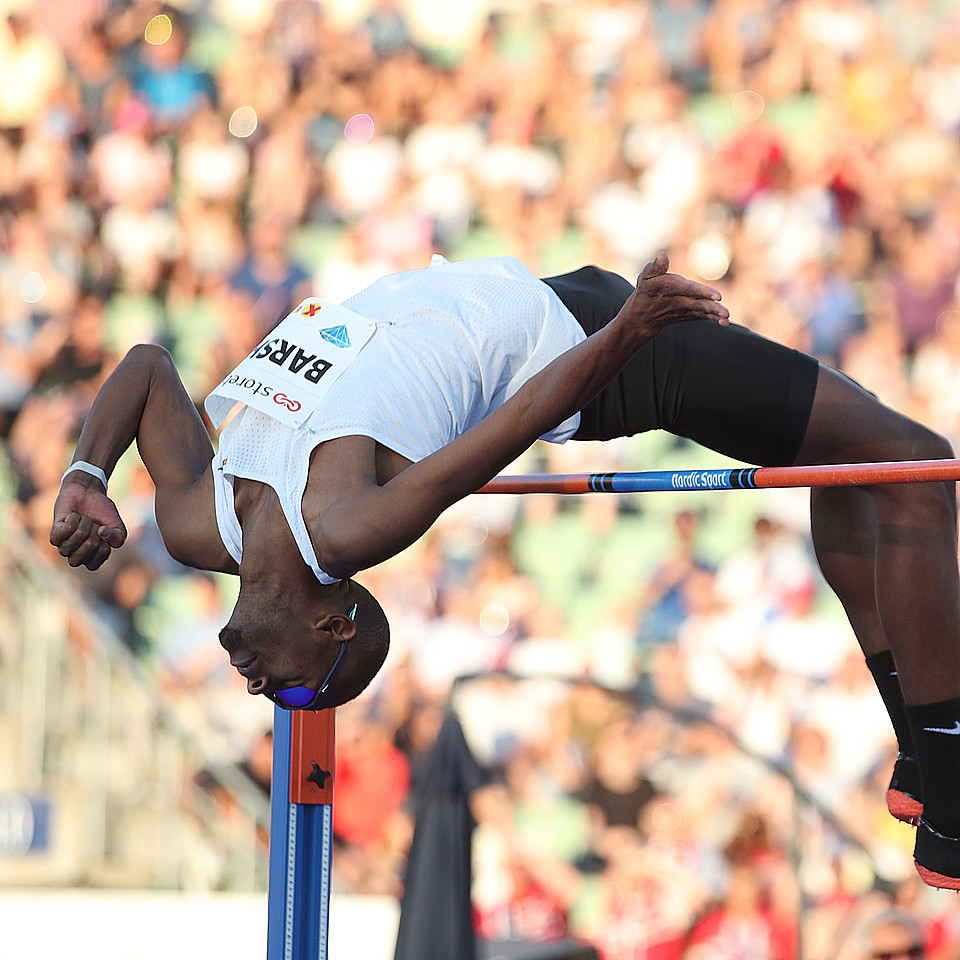 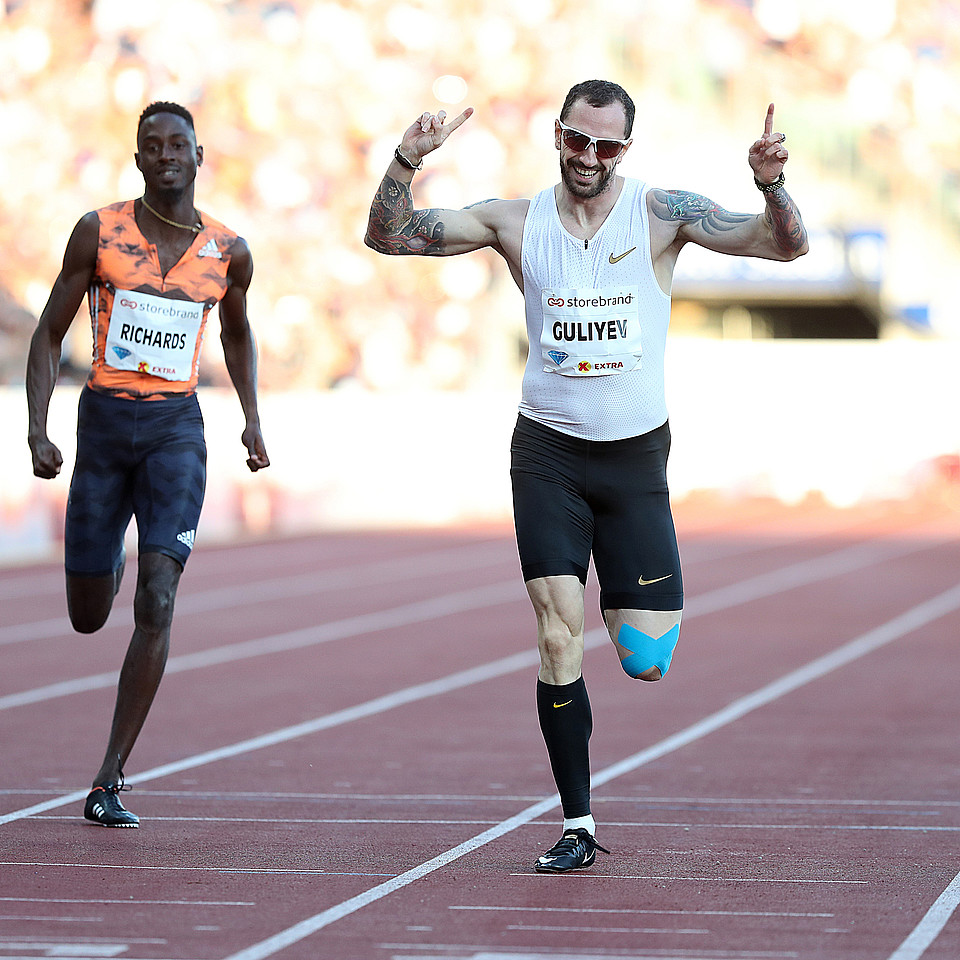 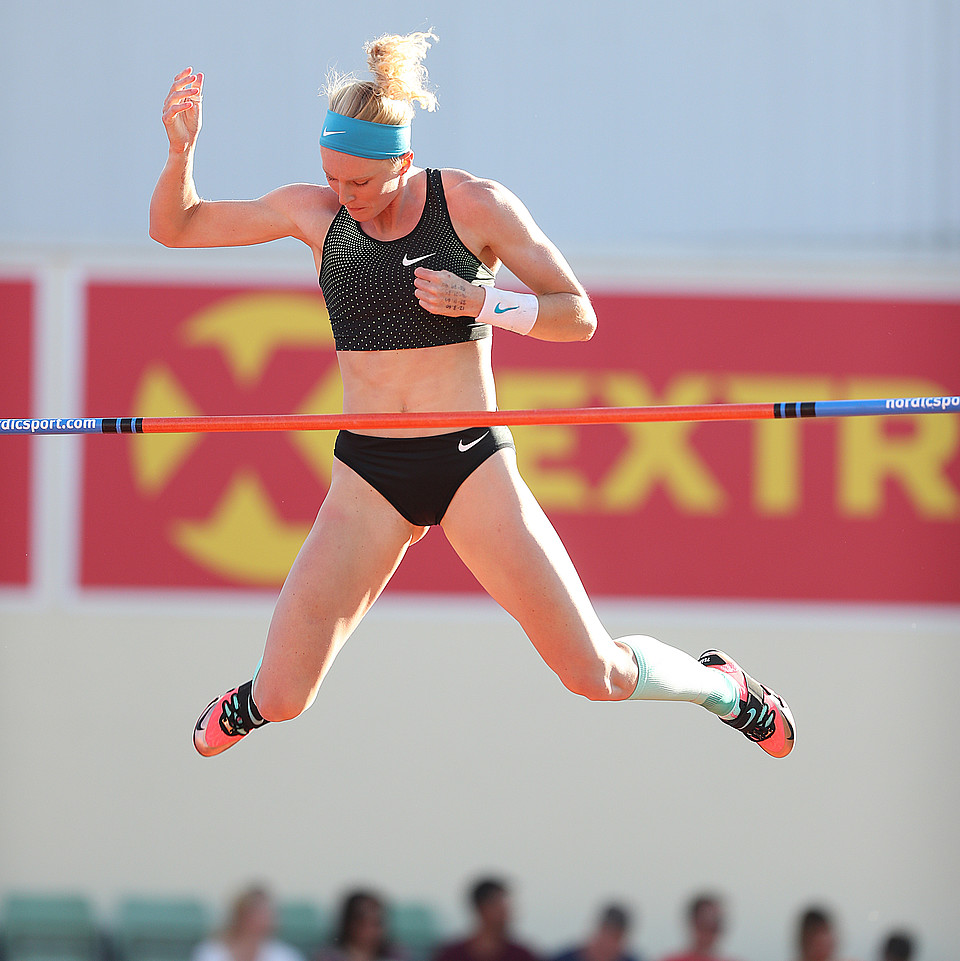 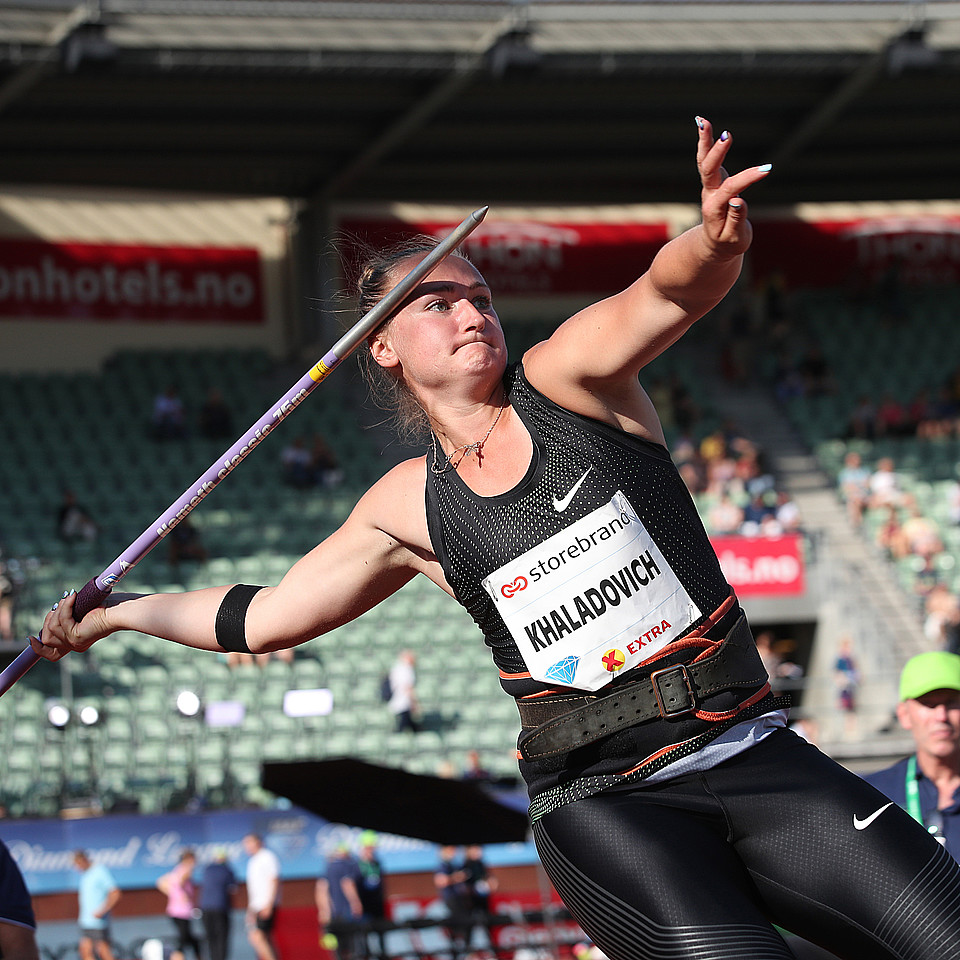 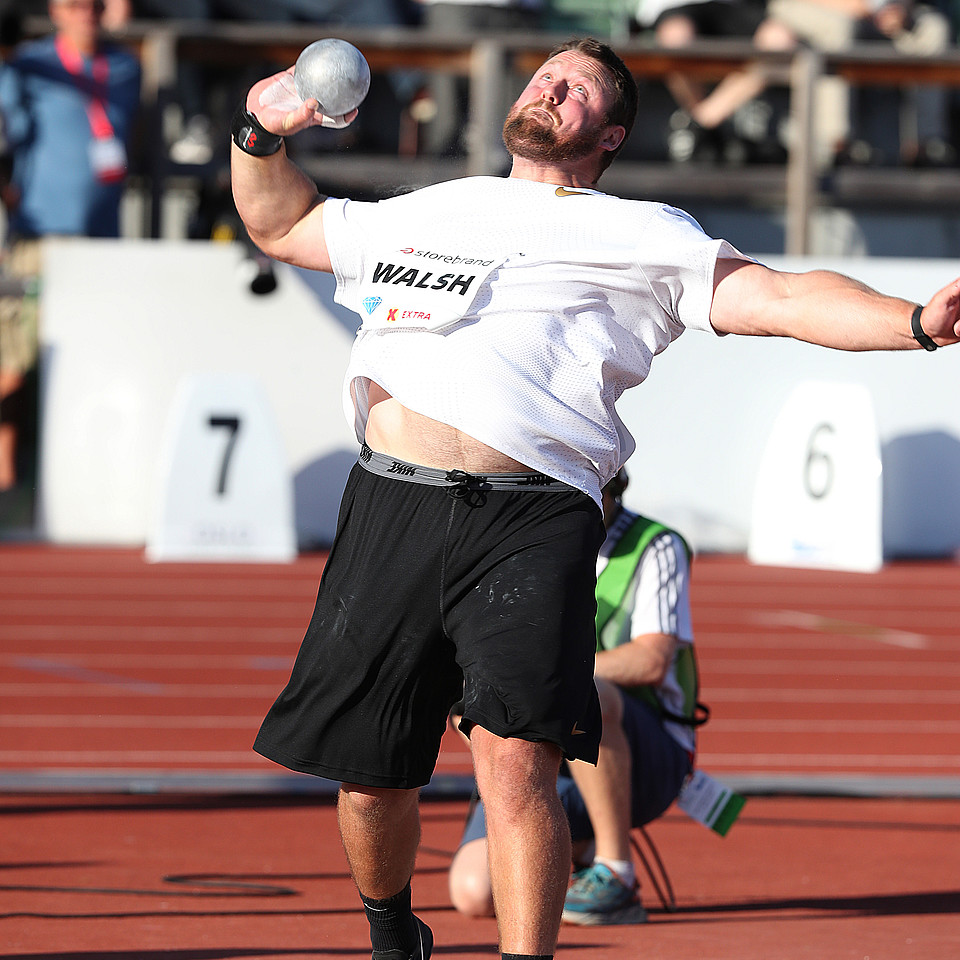 Tomas Walsh set a Meeting Record of 22.67m in the Men's Shot Put at the 2018 Oslo Bislett Games © Giancarlo Colombo

A stunning meeting record of 47.60 by Qatar’s Abderrahman Samba in the men’s 400m hurdles proved the highlight of the Bislett Games in Oslo on Thursday night (7), the fifth stop of the 2018 IAAF Diamond League.

The race was billed as a head-to-head clash between Samba and close rival Karsten Warholm, the 2017 world champion from Norway who was relishing the chance to compete in front of a home crowd after his national record of 47.82 in Rome last week.

Warholm again blitzed through the opening 300 metres after the gun set the eight athletes on their way, but once again it was Samba who finished stronger, the Asian record holder powering over the final two barriers with crisp technique – something Warholm struggled with over the final two barriers – to come home in 47.60 to Warholm’s 48.22. Turkey’s Yasmani Copello finished third in 48.54.

“That was Samba over the hurdles,” said Samba, in reference to the Brazilian dance style. “I cannot say I was confident coming into the last hurdle, but I have better endurance in the last metres. I’m enjoying life and hoping to continue to run fast next time in Stockholm.”

Warholm was far from disconsolate in second. This is the second best race of my career and I’m happy with it,” he said. “I’m excited to sit down with my coach and see where I can improve before Stockholm on Sunday.”

Mutaz Essa Barshim made it an even more successful night for Qatar, the world champion once again peerless in the men’s high jump, which he won with a best of 2.36m, which he cleared at the first attempt to beat rival Danil Lysenko into second, the neutral athlete managing a best of 2.33m.

“I really wanted to break the meet record but it was not to be today,” said Barshim, who will next compete in Ostrava.

Tatsiana Khaladovich produced another standout performance in the field events, the Belarus thrower unleashing a national record of 67.47m to snatch victory in the final round from China’s Huihui Lyu. Khaladovich looked to be having a bad evening for much of the competition, fouling her first effort then unable to surpass the 60-metre barrier on her next two throws.

At that point, Lyu had seized command with her opening effort of 65.11m, but she was unable to better that on all five throws to follow. Khaladovich managed 61.33m in the fifth round to move up to third, but then, from nowhere, came the spear that soared through the Oslo sky and hit the turf 67.47m away, breaking her previous Belarus record of  66.34m and moving to third on the 2018 top list. Lyu took second with 65.11m, while Czech Republic’s Nikola Ogrodnikova was third with 61.56m.

“I was not expecting such a great result,” said Khaladovich. “I knew I was ready, but not for that.”

Walsh gets the better of Crouser

The men’s shot put could best be described as a two-way fight between Tomas Walsh of New Zealand and Ryan Crouser of USA – world champion versus Olympic champion – where despite a hefty jab from Crouser in the fifth round Walsh responded with the haymaker to end matters in the sixth.

Neither surpassed the 22-metre barrier through the first four rounds, Walsh taking command with his opener of 21.91m, but it was in the fifth round that Crouser landed a big one, his 22.21m effort seemingly assuring victory.  But then Walsh showed champion class to reach into his locker and find a 22.29m effort to snatch victory and maximum Diamond League points. Darrell Hill of USA took third with 21.20m.

“It was awesome,” said Walsh, who threw a triumphant hand in the air the moment his throw landed. Crouser had a huge throw in the final round, but it was ruled a foul.

“I think it was close to 23 metres,” he said. “I guess it was the very corner of the toe board with my left foot. Anyway, it was a good fight with Tom.”

Caterine Ibarguen was again dominant in the women’s triple jump, the Colombian making her first jump her longest, soaring out to 14.89m to record an easy triumph over Tori Franklin (14.57m) and Kimberley Williams (14.50m.)

Andrius Gudzius got back to winning ways in the men’s discus, avenging defeat last week by Jamaica’s Fedrick Dacres to take maximum points with a throw of 69.04m. That left the Lithuanian well clear of runner-up Ehsan Hadadi of Iran and third-placed Daniel Stahl of Sweden.

Afterwards Gudzius sent a warning shot to his rivals: “My technique was at 85 percent and I still did 69 metres. That shows I’m ready.”

Sandi Morris claimed victory in the women’s pole vault, the world indoor champion the only vaulter on the night to go over 4.81m, her winning height. Runner-up was neutral athlete Anzhelika Sidorova, while Sweden’s Angelica Bengtsson took third with 4.61m.

Elsewhere Dalilah Muhammad continued her winning ways in the women’s 400m hurdles, the Olympic champion having to come from behind between the last two barriers to take the win in 53.65 ahead of fellow US athlete Shamier Little in 53.94. Canada’s Sage Watson came through strongly for third in 54.55, while the biggest cheer arrived shortly after the finish, when it was announced that back in sixth place, Norway’s Amalie Luel had set a national record of 55.26.

“I wanted to win and run a season’s best so it went according to plan,” said Muhammad. “I can come close to the world record. Why not?”

Murielle Ahoure once again utilised her lightning start to put distance between her and her rivals in the women’s 100m, which she went on to win in 10.91 (+1.6m/s) despite the late charge of Britain’s Dina-Asher Smith, who scorched a national record of 10.92 in second. Michelle Lee-Ahye was third in 11.06.

World champion Ramil Guliyev proved his success in London last year was no fluke in the men’s 200m, the Turk taking victory in 19.90 ahead of Canada’s Aaron Brown, who set a PB of 19.98. Commonwealth champion Jereem Richards was a distant third in 20.19.

“I knew the race would be strong with many good athletes,” said Naser. “They bring out the best in me.”

Cathal Dennehy for the IAAF