World leads and meeting records as season heats up in Doha 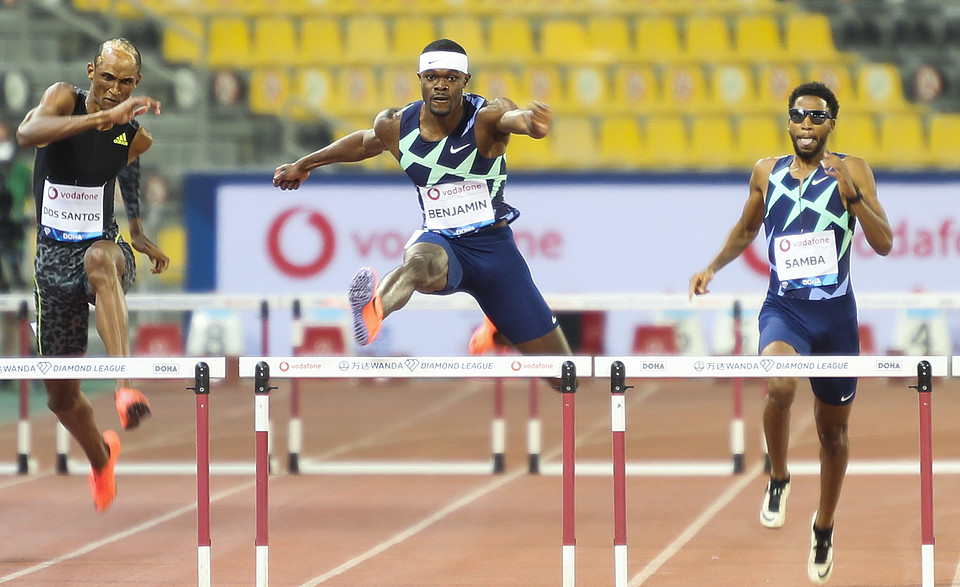 Yulimar Rojas and Rai Benjamin were among the stellar performances at a high-quality second Wanda Diamond League meeting of the season in Doha on Friday.

The Olympic season really started to warm up in Doha on Friday (28) as a series of world-leading performances and meeting record were achieved at the Wanda Diamond League event in Qatar’s capital.

Kenya’s Norah Jeruto won a thrilling women’s 3000m steeplechase with the quickest time in the world so far this year, while the USA’s 400m hurdles star Rai Benjamin was among the meeting record-breakers. The women's pole vault again saw great depth, with six athletes clearing 4.74m or higher for just the second time in history – the first having also been in Doha at the 2019 World Athletics Championships.

Benjamin was among the 31 athletes returning to the city in which they had secured medal-winning success at that global event. This time the world 400m hurdles silver medallist and 4x400m champion held off the fast-starting Alison dos Santos for a 47.38 win, improving the meeting record of 47.57 which had been set by Abderrahman Samba in 2018.

Dos Santos, the world U20 bronze medallist in 2018, was rewarded with another Brazilian record as he built on the 47.68 he ran at the USATF Golden Games with time of 47.57 in second. Commonwealth champion Kyron McMaster was third in 47.82 as Qatar’s Samba, racing the 400m hurdles for the first time since claiming world bronze on home soil, finished fourth in 48.26.

There were spills as well as thrills in the women’s 3000m steeplechase, with Jeruto keeping her composure after a very fast start to gain a dominant victory, while her compatriot Hyvin Kiyeng, the 2015 world champion, suffered a fall at the final water jump.

As Jeruto claimed a clear win in 9:00.67, Mekides Abebe had a breakthrough in second place – the 20-year-old clocking 9:02.52 to set an Ethiopian record. Just behind her was Bahrain’s Winfred Mutile Yavi, who also improved her best with 9:02.64, and Kiyeng got back to her feet to finish fourth in 9:07.58, one place ahead of the USA’s 2017 world champion Emma Coburn.

“I feel very good,” said Jeruto, who next plans to race in Oslo. “I was very well prepared for today.”

Jeruto's fellow Kenyan Timothy Cheruiyot was also largely untroubled on his way to a world-leading 1500m, claiming another win in Doha after his world title victory in 2019. This time he clocked 3:30.48 on his season debut, passing Ethiopia’s world indoor champion Samuel Tefra – who had led through the bell in 2:34 – on the back straight. Glancing over his shoulder, the Kenyan strode away to finish clear ahead of Australian record-holder Stewart McSweyn (3:31.57) and Morocco’s two-time world steeplechase medallist Soufiane El Bakkali (3:31.95), who passed a tiring Tefra in the closing stages.

Commonwealth champion Wycliffe Kinyamal became the first athlete to dip under 1:44 for 800m this season, the Kenyan clocking 1:43.91 ahead of world bronze medallist Ferguson Rotich (1:44.45) and Britain’s Daniel Rowden (1:44.60).

After a tactical start to the women’s 800m, Kenya’s Olympic 1500m champion Faith Kipyegon saved her energy for a fast final 200m, kicking away from Jamaica’s Natoya Goule and Morocco’s Rababe Arafi to dominate in 1:58.26. Goule had been to the fore as the group decided not to go with the pacemaker. Making their move on the second lap, Kipyegon and Arafi surged ahead but Goule came through for second in 1:59.70 as Arafi was third in 1:59.83.

“I’m very excited to be here,” said Kipyegon, racing for the first time this year and back in the city where she set her 800m, 1500m and 3000m PBs as well as claimed world 1500m silver. “The pandemic wasn’t easy, but we always try to be great. I’m training so hard and hoping to do my best."

A high-quality affair was expected in the women’s pole vault, with the top eight finishers from the 2019 World Championships all returning to Doha, and the competition didn’t disappoint. Both the USA’s Katie Nageotte, who finished seventh in that global final, and Sandi Morris, the silver medallist on that occasion, matched the meeting record of 4.84m. Another four athletes ­­– Holly Bradshaw, Katerina Stefanidi, Tina Sutej and Iryna Zhuk – achieved 4.74m, with Nageotte winning on countback.

“You can expect anything in the pole vault, but I was ready to come and jump,” said Nageotte, who had cleared a world-leading PB of 4.93m five days earlier in Georgia.

All eyes were also on the women’s triple jump, with Venezuela’s Yulimar Rojas back in action after her 15.43m leap at the World Athletics Continental Tour meeting in Andujar. She followed that mark – which was just seven centimetres off the world record – by opening her competition in Doha with 15.15m (2.0m/s) in the first round. That easily secured her place for the final round top-three shoot-out, and with that attempt she recorded 15.11m to win the competition ahead of Jamaica’s Kimberly Williams and Shanieka Ricketts.

Earlier in the event, Ricketts had come so close to the 15-metre mark, leaping a PB of 14.98m in round five, but her final attempt was a foul. For Williams, 14.45m from that last leap secured her second place, after a PB of 14.69m, also from the fifth round.

The women’s discus and men’s shot put were aslo decided by the top-three final round contest, with Cuba’s world champion Yaime Perez throwing 61.35m to win after 63.75m in an earlier round and the USA’s Valarie Allman throwing furthest overall with 65.57m, later securing her second place finish with a 58.58m throw. Armin Sinancevic equalled his recently-set Serbian record of 21.88m in the fifth round of the shot put competition and went on to place third behind New Zealand’s 2017 world champion Tom Walsh and Croatia’s Filip Mihaljevic, who threw 21.63m and 20.89m respectively in that last round as Sinancevic recorded a foul.

Home favourite Mutaz Barshim had been hoping to mark a decade of Diamond League competition with another win, back competing on home soil where he claimed his second world title in 2019. But while his best on the evening was 2.30m, Ilya Ivanyuk went on to soar clear at 2.33m. With the win secured, he had one attempt at 2.36m before calling it a day.

Fraser-Pryce and Bednarek shine in sprints

The women’s 100m at the Diamond League season opener in Gateshead five days earlier had seen Jamaican sprint star Shelly-Ann Fraser-Pryce battle the rain and wind as well as her rivals to finish fourth, but in Doha she secured success, clocking 10.84 (1.1m/s) to win ahead of Nigeria’s Blessing Okagbare (10.90) and the USA’s Javianne Oliver (11.03).

A close men’s 200m clash was won by the USA’s Kenny Bednarek as he pipped Canada’s Andre De Grasse 19.88 to 19.89 (0.4m/s). With identical PBs of 19.80, the pair were fairly evenly matched as they came off the bend but Bednarek had the strength to edge ahead. De Grasse wasn’t done and surged again, eventually missing out by just 0.01.

Jess Whittington for World Athletics and the Wanda Diamond League