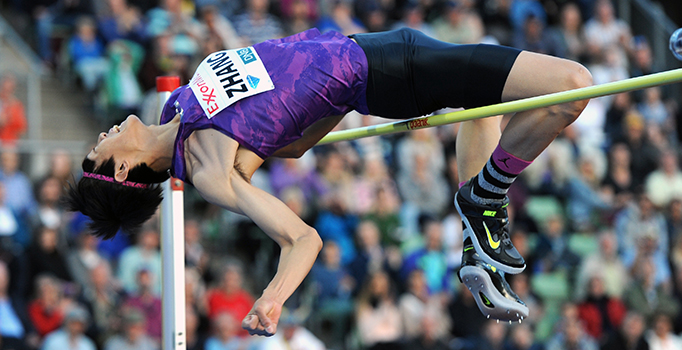 China’s very own maverick high jump hero Zhang Guowei is set to star at the 2016 Shanghai Diamond League meeting on 14 May where he will come face-to-face with Bohdan Bondarenko, the man he matched height-for-height at the Beijing World Championships last summer.

The pair were almost inseparable in 2015 when they finished joint second in Beijing to share the silver medal, ended the season just 1cm apart placed second and third on the world high jump list, and finished second and third behind Qatar’s world leader Mutaz Barshim in the high jump Diamond Race.

They met four times during the outdoor season and leapt the same height at three of those meetings, so another close battle can be expected in 2016.

For Zhang, 2015 was something of a breakthrough year as the head-banded showman improved his personal best by 4cm from 2.34m to 2.38m to rank just below Barshim for the year, while he also picked up a first global medal to go with the Asian Games silver he won in 2014. He now ranks just 1cm below the legendary former world record holder Zhu Jianhua on China’s all-time high jump rankings, while he has already eclipsed Zhu’s national indoor record.

Bondarenko started last season in style by leaping 2.37m in early May, but the 2013 world and 2014 European champion couldn’t quite reach the heights of two years ago when he broke Ukrainian record to place joint third on the world all-time list with 2.42m. With the Olympic Games in Rio just three months away, he’ll be hoping to return to that sort of form in 2016.

The pair have clashed twice at the Shanghai Diamond League meeting over the past last three years, with Bondarenko finishing second, one place ahead of his Chinese rival in 2013 and again 12 months ago when they both cleared 2.32m, again beaten by Barshim.

With so much to jump for in 2016, they will both be keen to get this Olympic season off to a winning start. It should make for another fascinating encounter.