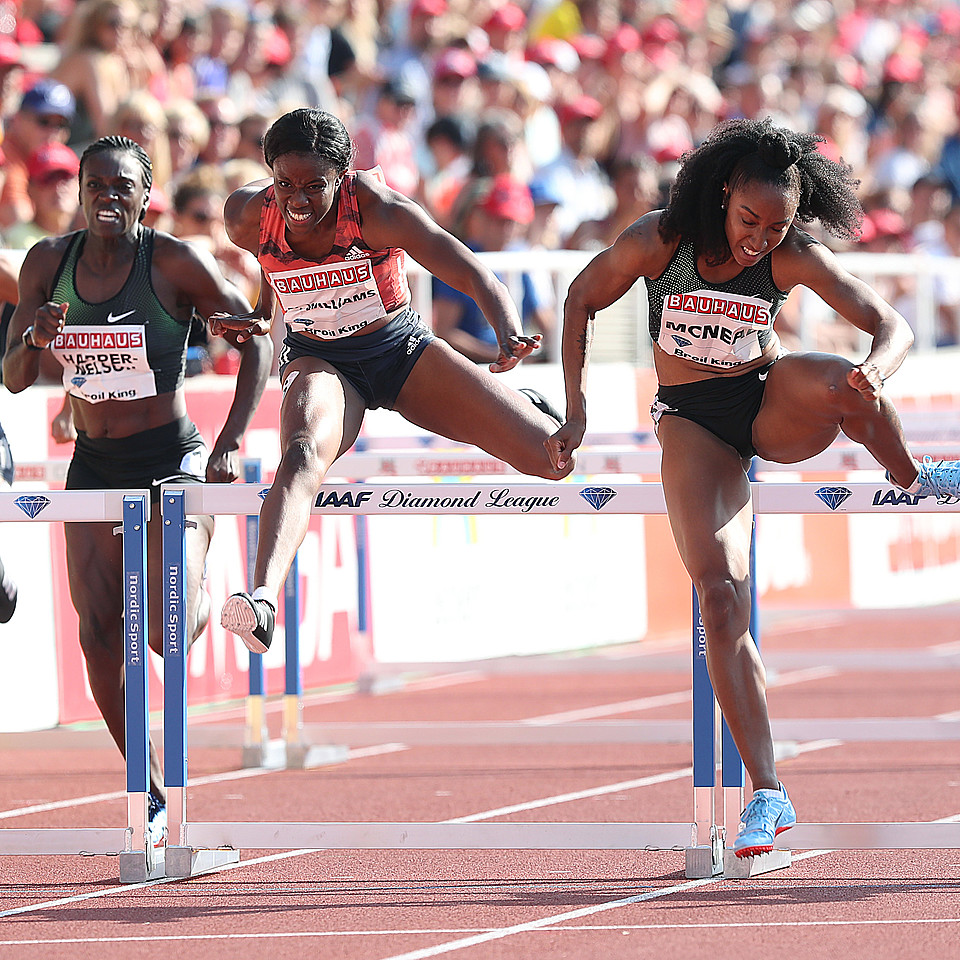 Brianna McNeal (USA) set a World Lead and Meeting Record of 12.38 in the Women's 100m Hurdles at the BAUHAUS Galan 2018 in Stockholm © Giancarlo Colombo 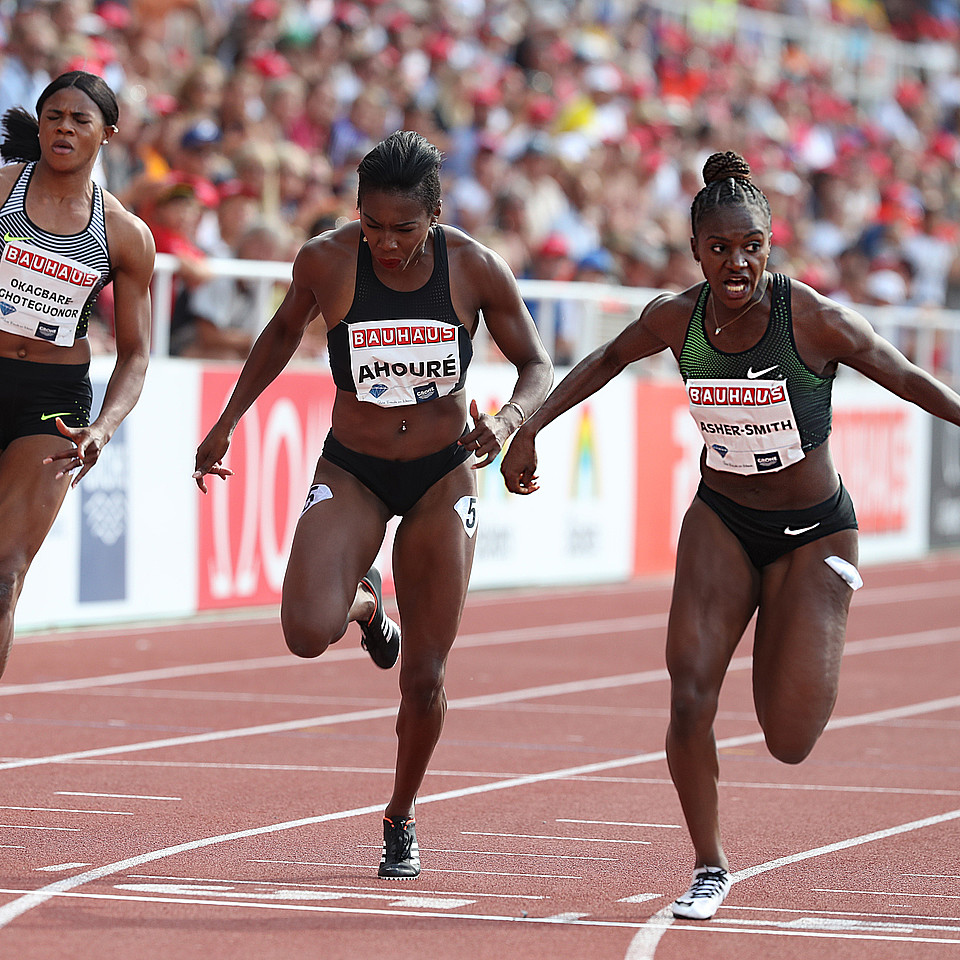 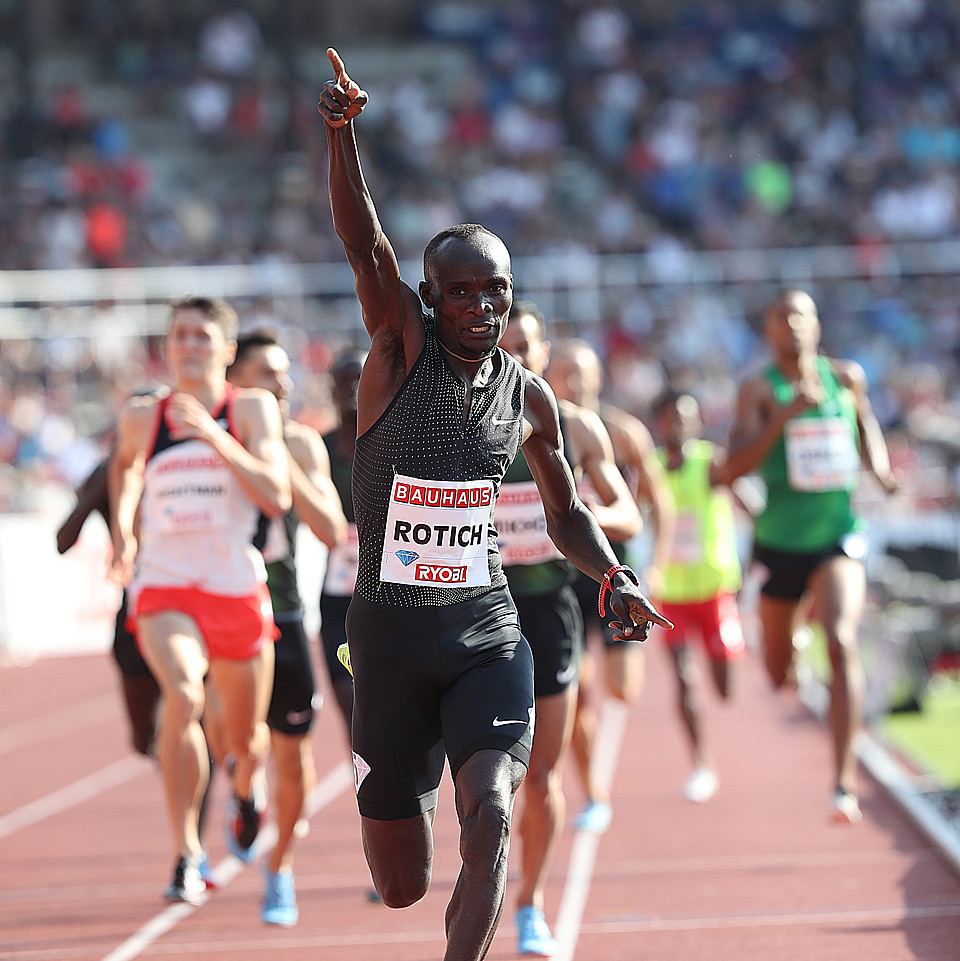 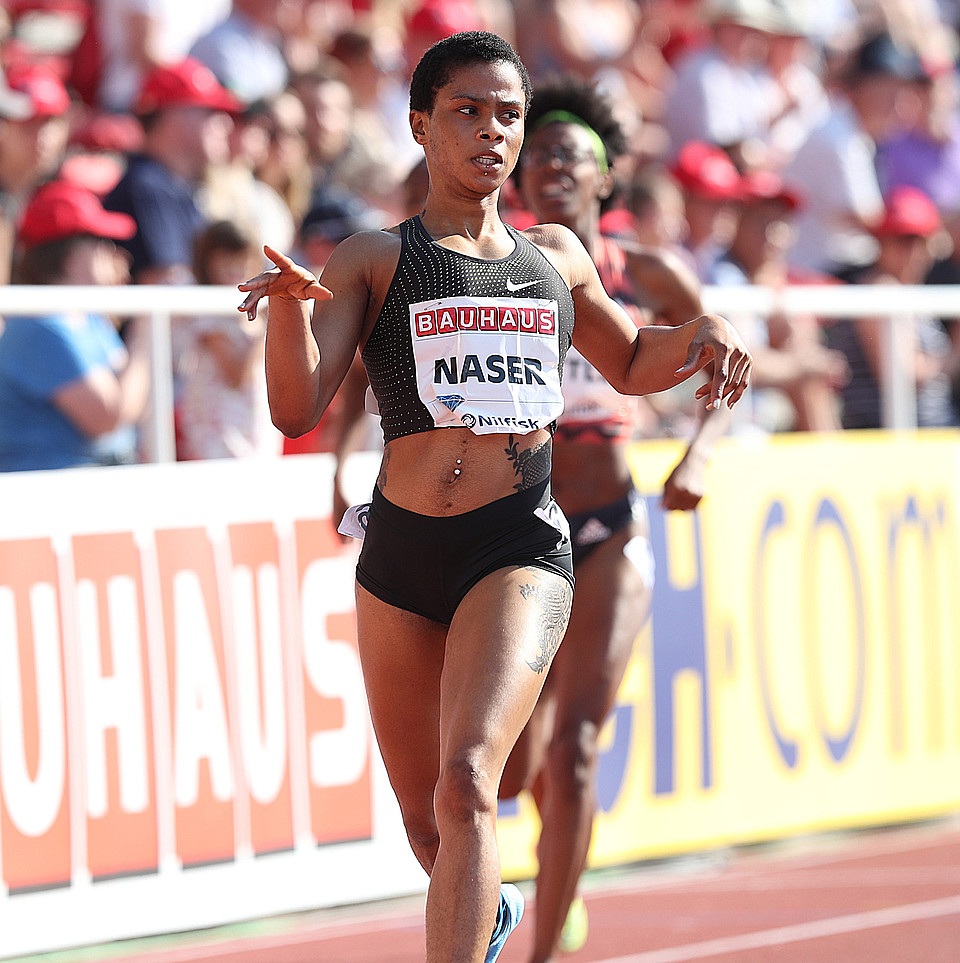 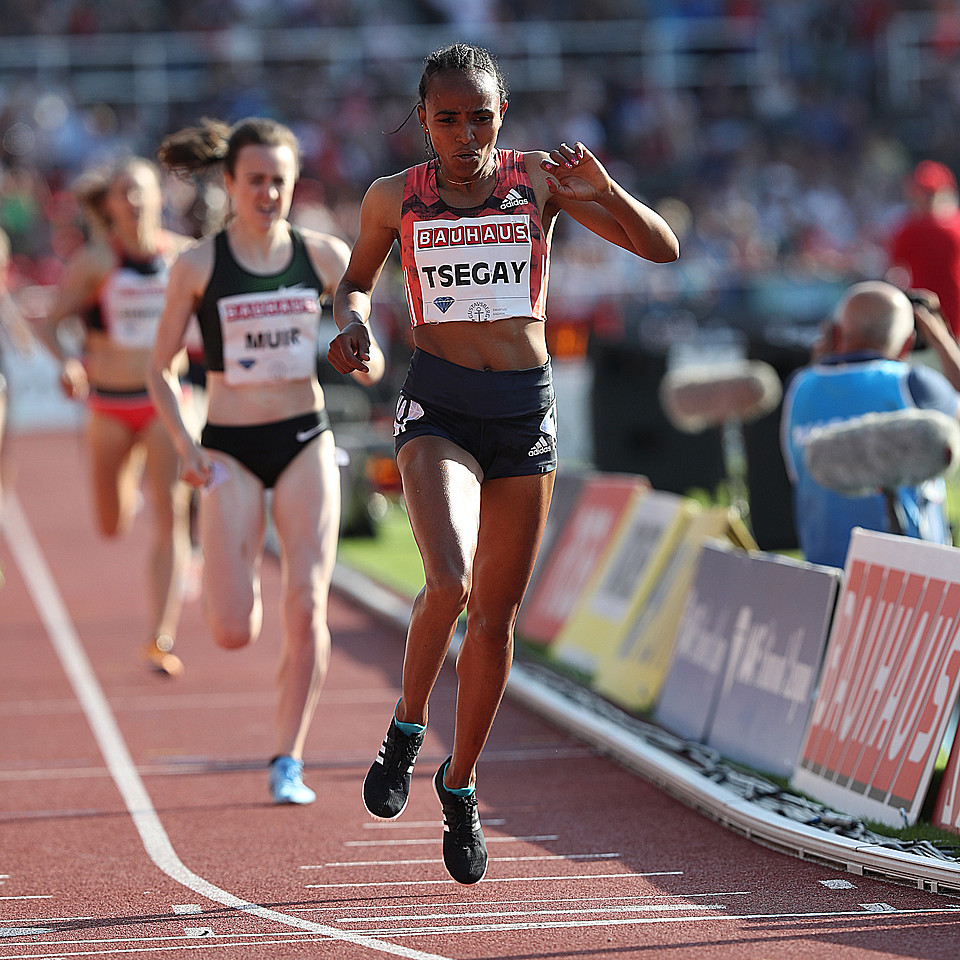 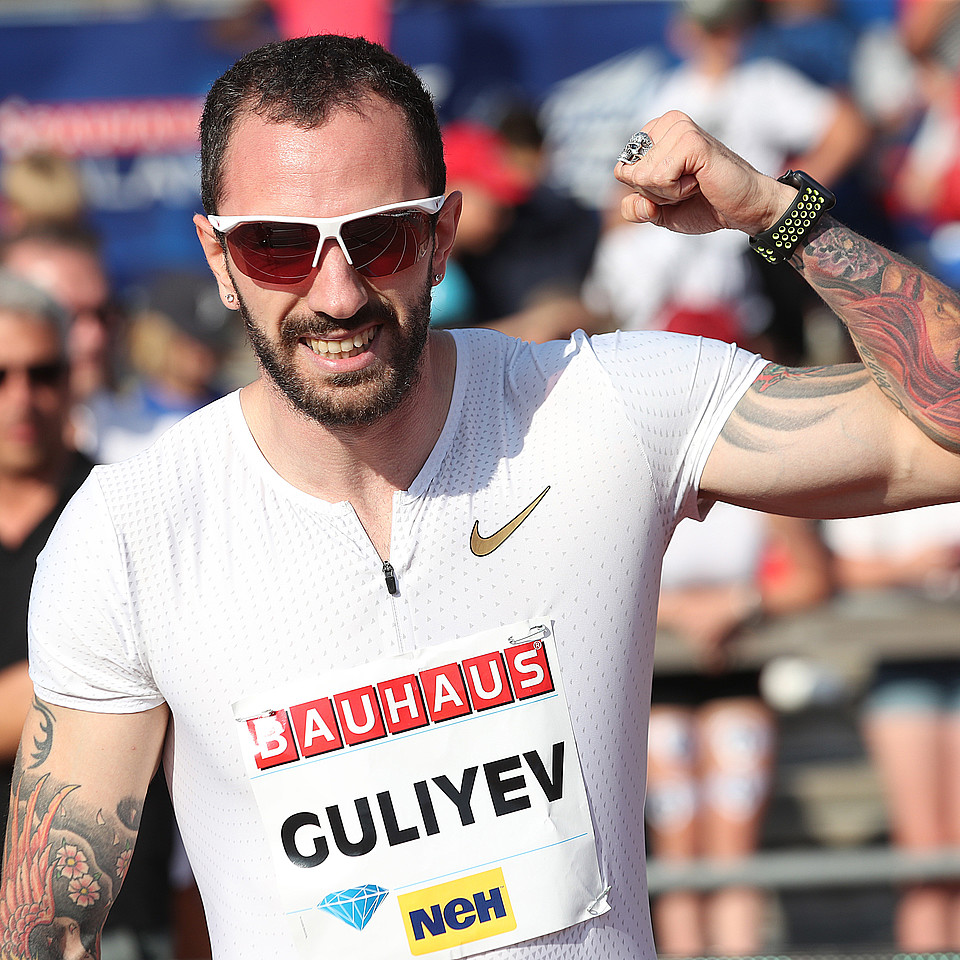 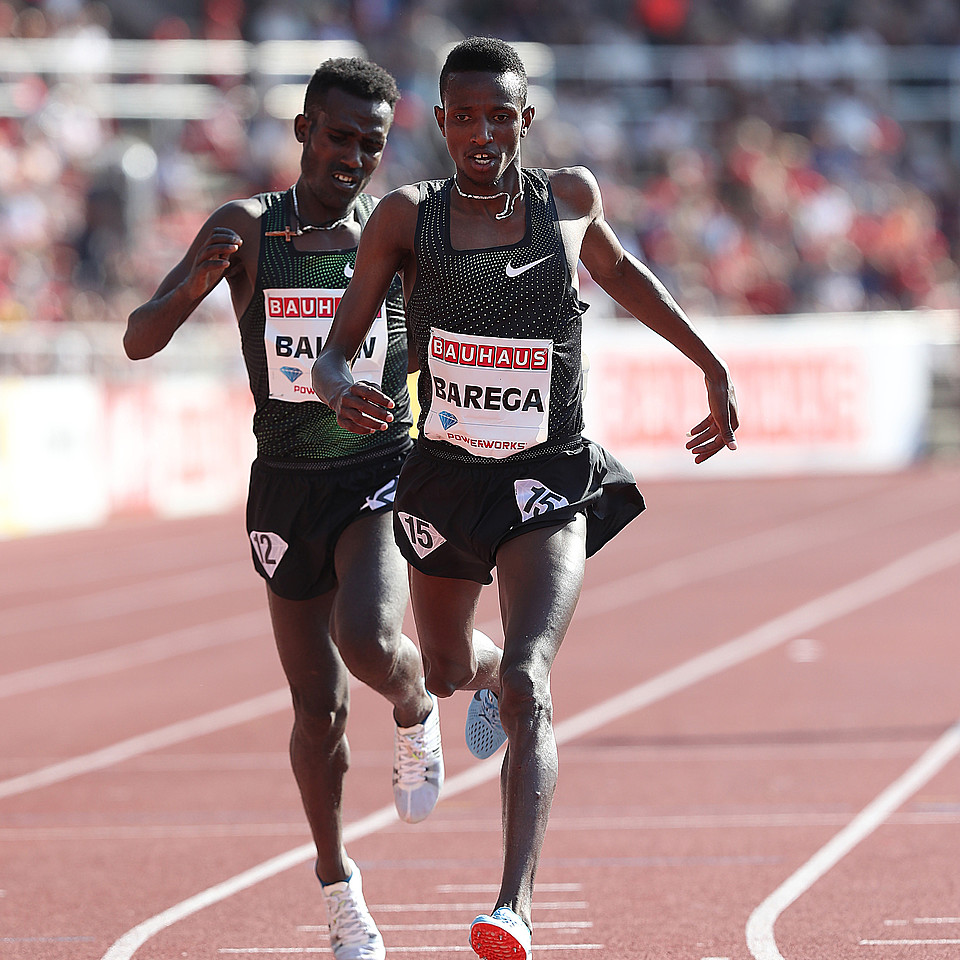 He settled into his blocks wearing black socks emblazoned with flames, and moments later we found out why: at the BAUHAUS-galan in Stockholm on Sunday afternoon (10), the sixth meeting of the 2018 IAAF Diamond League, 22-year-old Abderrahman Samba unleashed another scorching, stunning display to win the men’s 400m hurdles in 47.41.

It was an Asian record, a Diamond League record and the fifth sub-48-second clocking in a row by Samba, the first time that feat has been accomplished since Derrick Adkins managed it back in 1995.

As it was in both Rome and Oslo, world champion Karsten Warholm could do nothing to halt the Qatari’s dominance, even if the Norwegian produced the performance of his life in second with a national record of 47.81, carving 0.01 off his previous mark.

“I was looking for something big and I got that today,” said Samba. “It was windy on the back straight so that made us push too hard but it was amazing to get the Diamond League record and a PB today. Now I’ll get back training then I might compete in Paris.”

Warholm was far from disappointed in second.

“The perfect race will come sometime, I am pushing the limits all the time,” he said. “Today I was pushing Samba. He was the better man, of course, but I felt like I did my job.”

Brianna McNeal was highly impressive in the women’s 100m hurdles, the 2016 Olympic champion swift and precise over the barriers to come home in a world-leading 12.38 (+1.3m/s), with 2015 world champion Danielle Williams of Jamaica setting a PB in second (12.48) and Alina Talay of Belarus third in 12.55. It also netted McNeal a diamond for breaking Gail Devers’ meeting record of 12.42.

“I knew that once I put the race together then I would get a great time,” said McNeal, who will next compete in Budapest before returning to the IAAF Diamond League circuit in Rabat.

Dina Asher-Smith capped a fine week by reversing placings with Murielle Ahoure from their clash on Thursday night in Oslo, where the Briton set a national record of 10.92 to finish second to the Ivorian. Here, Ahoure led through the opening 60 metres once again – no surprise there from the world indoor champion – but then Asher-Smith’s 200m ability began to tell and she came through strongly to take victory in 10.93 (-0.1m/s) ahead of Ahoure (11.03) and Michelle Lee-Ahye (11.11).

“I was especially happy with the second half of the race,” said Asher-Smith. “This is what my coach and my team have been working on. I was really happy I was able to reproduce that time (from Oslo) because I am an excitable person so when I do something good, I normally take a bit of time to come down.”

Tsegay mines a diamond, too

Gudaf Tsegay will leave Stockholm with a valuable piece of excess baggage – a diamond – after setting a meeting record to win the women’s 1500m in 3:57.64 after a run where the Ethiopian threw caution to the considerable wind blowing in the Olympic stadium. She blasted through 800m behind the pacemakers, who covered the first two laps in a vicious 2:03.93.

Tsegay seized command on the third lap and hit 1200m all alone in 3:09.82, at which point Laura Muir was her closest pursuer, the Briton sling-shotting out of the pack and giving chase over the final lap. But for all that Tsegay was fading, it wasn’t enough, the Ethiopian hitting the line with seven metres to spare over Muir, who was second in 3:58.53. Rababe Arafi edged Jenny Simpson to take third in 4:00.28.

“I was confident,” said Tsegay. “I’m happy I ran well and I felt strong.”

The men’s 5000m boiled down to a two-way duel between Selemon Barega of Ethiopia and Birhanu Balew of Bahrain, and anyone who witnessed Barega’s finishing burst a fortnight earlier in Eugene knew how that one would end.

“It was a not a good time,” said Barega, a man not easily pleased. “I wanted under 13 minutes but I hope to do it next time.”

In the men’s 1000m, an event that counts towards the 800m for the Diamond League standings, Kenya’s Ferguson Rotich took maximum points and routed the field, powering away from his rivals over the final 200 metres to win in 2:14.88, well clear of Bahrain’s Sadik Mikhou (2:16.09) and Britain’s Jake Wightman (2:16.27).

“It was hard work,” said Rotich. “It was very hot but it was hot for everyone so it is important to deliver.”

The men’s 200m was marred by the injury picked up by Steven Gardiner, who was quickest in the field this year after his Bahamian record of 19.75. He pulled up sharply while in contention with 100 metres to run, leaving the path clear for world champion Ramil Guliyev, who again powered clear of Aaron Brown to take maximum points in 19.92 (+0.9m/s) to the Canadian’s 20.07.

“I wanted a better time but it was okay,” said Guliyev. “I think I can go better at the European Championships.”

Salwa Eid Naser of Bahrain set a national record of 49.84 to take victory in the women’s 400m, the world silver medallist coming home strongest after a dour home-straight duel with world champion Phyllis Francis, who was second in a big season’s best of 50.07. Jessica Beard was third in 50.55. #

“I do not check who is coming for me. I just go,” said Naser. “I am exhausted in the heat but I’m very pleased with the personal best.”

In the national 1500m, Jakob Ingebrigtsen continued his stellar season with a comfortable win in 3:37.42, the 17-year-old Norwegian never looking troubled as he outkicked Australia’s Jordan Williamsz (3:38.30) just three days after winning over the same distance in Oslo.

“I still had my Bislett race in my legs but I am happy with another good race,” he said. “I now need to rest and do a bit more training before the world juniors next month.”

Australians Peter Bol and Joseph Deng fought out a tit-for-tat home-straight battle in the men’s national 800m, with Bol edging the verdict in a photo finish, 1:44.56 to 1:44.61, both setting lifetime bests.

Cathal Dennehy for the IAAF and the IAAF Diamond League