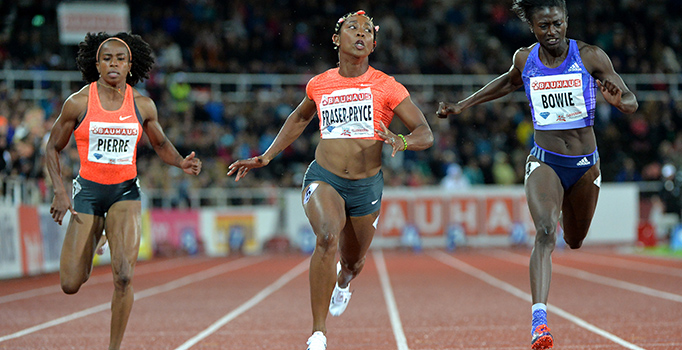 As we look back on a thrilling 2015 IAAF Diamond League season, our Diamond Race Review series allows you to relive all the thrills and spills of the 32 contests for the Diamond Trophy. In the final instalment, we look at the sprints and the hurdles...

Shelly-Ann Fraser-Pryce may have won the Diamond Race with a comfortable eight point lead in the end, but her route to a fourth Diamond Trophy was not as simple as it sometimes looked. Victories from Blessing Okagbare-Ighoteguonor and Murielle Ahoure in Shanghai and Oslo respectively meant that Fraser-Pryce was constantly looking over her shoulder. Her victory in Stockholm gave her a clear lead before the Zürich final, though, and the popular Jamaican won again in Switzerland to secure yet another title.

In the men's 100m Diamond Race, Justin Gatlin established an early lead with victories in Doha and Rome. He consolidated them towards the end of the season, winning in Monaco and Brussels to take the Diamond Trophy.

Alonso Edward just scraped over the line with victory at the Zürich final in what was a hugely entertaining and unpredictable Diamond Race in the men's 200m. With Edward, Christophe Lemaitre, Zharnel Hughes and Justin Gatlin all winning at various points throughout the season, it was the South African Anaso Jobodwana who held a slim a lead ahead of the final, despite having failed to win a single meeting. Edward triumphed in Zürich though, taking eight points to push him to a second consecutive Diamond Trophy.

The women's event was equally open. Allyson Felix took an early lead in Doha before falling behind Jeneba Tarmoh, who claimed first place in both Rome and Birmingham. After Tori Bowie through another spanner into the mix by winning in New York, the Diamond Race was impossible to predict. Felix ran to victory in Lausanne to reclaim the lead, but still needed to finish ahead of Tarmoh to secure the Diamond Trophy. She did so, coming in second after Dafne Schippers and claiming a third title in the competition.

The men's 400m was supposed to have been another duel between LaShawn Merritt and Kirani James. That was until Wayde van Niekerk spoiled the party. The South African's surprise victory over James in Paris announced him as a major competitor on the world stage, and he followed it up with a world championship title in August. It wasn't enough to win the Diamond Race, though, as van Niekerk ran out of steam in the final, leaving James to take another Diamond Trophy.

In the women's 400m, Francena McCorory was imperious. Winning four of the six meetings before the final, McCorory was largely unchallenged, and claimed the Diamond Trophy with ease despite finishing only second at the Brussels final.

The women's 100m hurdles was one of the closest Diamond Races of 2015. Jasmin Stowers opened the scoring with a victory in Doha, but the next two rounds – in Rome and Birmingham – were snapped up by Sharika Nelvis and Dawn Harper Nelson respectively. The three women then shared the spoils in the second half of the season as well, taking one victory each from Paris, London and Stockholm. The result was that Stowers, Harper Nelson and Nelvis were deadlocked at the top of the table ahead of the Brussels final. It was Harper Nelson who won the final showdown, racing to victory and a fourth consecutive Diamond Trophy

The men's 110m hurdles was equally open. David Oliver got off to a strong start, winning two of the opening three rounds. Orlando Ortega's victory in Paris and Jason Richardson's triumph in London threw the race wide open, however, and Ortega made it even close with another win in Stockholm. The Cuban was desperate to win the Diamond Trophy having missed the World Championships, but it was Oliver who triumphed. The American beat Ortega into second behind Sergey Shubenkov in Zürich, a victory which gave him just enough to take the Diamond Trophy by four points.

The men's 400m hurdles Diamond Race was a straight, two way fight between Johnny Dutch and Bershawn Jackson. Jackson struck first, winning in Doha, only to be overtaken as Dutch took all four points from both Eugene and Rome. From then on, it was the Bershawn Jackson show. Victories in Lausanne and Monaco gave him a comfortable lead, enough to ensure that second place sufficed in Brussels.

The women's event saw one of the best turnarounds of the year. Four time Diamond Race winner Kaliese Spencer seemed to have another Diamond Trophy wrapped up by July, taking victories in Shanghai, Birmingham and Oslo. Zuzana Hejnová struck back in Paris, but it seemed a forlorn hope that she would catch the American. She did, though. Victories in London, Stockholm and the final in Zürich meant that Hejnová denied the favourite Spencer once again, finishing with a winning margin of 10 points.