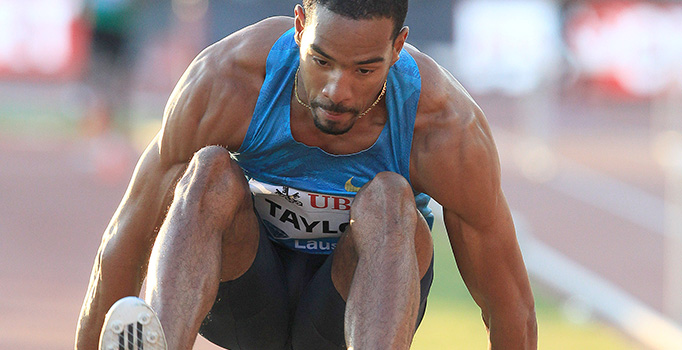 American record holder Christian Taylor’s road to a second Olympic gold medal in the triple jump faces a major test at the Prefontaine Classic, which features a unique clash of five gold medalists and a reunion with three college alumni.

he Pre Classic’s triple jump runway will see four former University of Florida jumpers fuel an intense rivalry – all have been world ranked No. 3 or better by Track & Field News in the last two years.  It will also be the first meeting on U.S. soil of the four triple jumpers who own the nine longest efforts at Hayward Field, home of the upcoming U.S. Olympic Trials.

Christian Taylor, 25, is at the top of all but one major triple jump list.  His best of 59-9 (18.21) earned a second World Championships gold medal in Beijing last summer and was just 3¼ inches from Jonathan Edwards’ 20-year-old world record of 60-¼ (18.29).  Taylor finished the season with his fourth T&FN No. 1 world ranking and fourth IAAF Diamond League trophy – all in the last five years.

Omar Craddock, 24, led a 1-2-3 finish of Florida triple jumpers in last year’s U.S. championships at Hayward Field with a lifetime best of 57-6¼ (17.53).  It was his third U.S. triple jump title, the most by a Florida jumper.  He was in line for a bronze medal at last year’s World Championships until the final round, settling for 4th.  Craddock finished the season ranked No. 3 in the world by T&FN.

Will Claye, 24, owns the Hayward Field record with his 57-11¼ (17.66) victory at the 2014 Pre Classic.  He already can claim the most Olympic medals of anyone in the field with his triple jump silver and long jump bronze from London in 2012.  Claye has the most wind-legal 57-foot jumps at Hayward Field (6) and has not finished lower than second (long jump or triple jump) on this runway since 2013.

Marquis Dendy, 23, is set for his Pre Classic debut, but he already has had incredible success on this runway – winning all of his five outdoor NCAA or U.S. titles at Hayward Field, including his wind-legal best of 57-5 (17.50).  He was ranked No. 2 in the world in the long jump by T&FN last year and won The Bowerman Award as the nation’s top collegiate male athlete.  His 2016 campaign already includes a long jump gold medal at the World Indoor Championships with the year's longest jump.