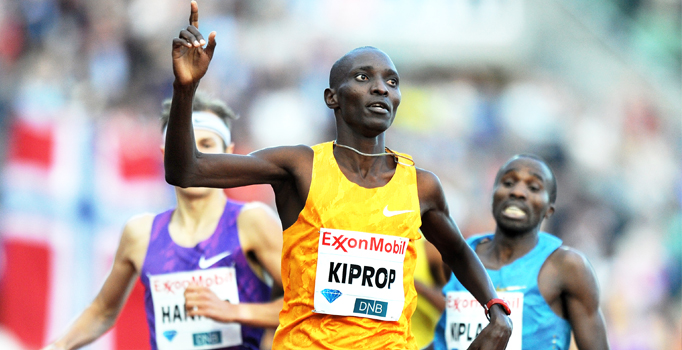 The Dream Mile is synonymous with the ExxonMobil Bislett Games. There is virtually no other race on the track and field circuit that connects an event, a city and a recognised standard of excellence as does the Dream Mile in Oslo. It has become a contest that is immediately acknowledged through its particular history and its resume of quality of results.

The history speaks for itself, the World Records with Ovett, Coe, Cram, etc. The superstars of the sport, Bayi, Walker, Morceli and El Guerrouj, have all competed in the illustrious race. Not to forget the abundance of National records established in this race – Australia, New Zealand, Qatar, Ireland, Germany, Spain, Great Britain, Somalia, Portugal, Canada, Brazil, Saudi Arabia, to name a few.

The current World Champion, Asbel Kiprop, is a multi-winner of the Dream Mile and returns to the Diamond Race event at Bislett with a dual purpose, winning and winning in a fast time!

He will meet stern opposition from the likes of Ayanleh Souleiman (DJI), who is not only the fastest man in the field with a personal best of 3:47.32 but recently claimed the World Indoor record for 1000m and would dearly love to come away from Oslo with early season “bragging rights”.

Kiprop’s countrymen Silas Kiplagat and Elijah Manangoi are both major threats in style of race. Kiplagat has run under 3:50 for the Mile on two occasions and has gone below 3:30 for 1500m on four separate occasions. The quality of his racing record makes him one of the most consistent competitors ever at this distance.

Manangoi was a relative unknown until last season when not only did he surprise by making the Kenyan team at the World Championships but almost provided the biggest shock of the meeting by securing a silver medal in the 1500m after looking a winner in the home straight and only being passed by Asbel Kiprop in the “shadows of the tape”. This will be Manangoi’s first attempt at the Mile but judging by his personal best at 1500m (3:29.76), he will be looking at something under 3:50!

Four years ago at the ExxonMobil Bislett Games, an unheralded young Algerian athlete by the name of Taoufik Makhloufi won the 1500m on the pre-program, but did it in impressive fashion. What followed in that Olympic year is now history as Makhloufi went on to win the Gold medal in London and has since established himself as one to the world’s leading 800m / 1500m competitors with outstanding personal bests of 1:43.53 and 3:28.75. He represents a real threat to Kenyan domination of this event.

Others who will have their eyes firmly set upon National Records will be the powerful Czech Jakub Holusa, fresh from his medal at the World Indoors, and Australia’s Ryan Gregson who was in such commanding form during the Oceania domestic season.

Of course there is the Norwegian record holder Henrik Ingebrigtsen! The twenty-five-year-old from the west of Norway established his country’s Mile record (3:50.77 ) in this stadium two years ago and would like nothing more than to achieve a sub 3:50 clocking in front of the rapturous Bislett crowd. This year he will face competition from his two-year-younger brother Filip who has already run 3:37.04 this year, making him the second fastest Norwegian ever in the 1500m, only Henrik has gone faster.

Once again, the perfect conditions, the fast track and the excitable patrons will gather in a suburb of Oslo to welcome competitors to the time honoured ExxonMobil Bislett Games “Dream Mile”.