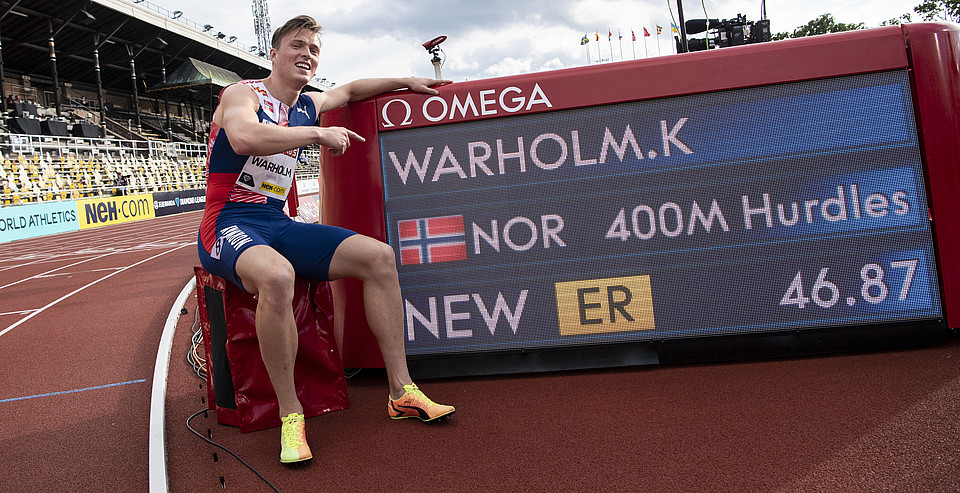 In part one of our review of the 2020 Wanda Diamond League season, we take you back to the summer for a whirlwhind tour of Oslo, Zurich, Monaco and Stockholm.

Curious times call for creative measures, and as the coronavirus pandemic brought the world to a standstill in 2020, the Wanda Diamond League was forced to adapt. Yet despite all the difficulties posed by the crisis, the series still managed to deliver eight rip-roaring athletics events over the second half of the summer.

From June to September, the WDL and local organising committees were able to stage four exhibition events and four fully competitive meetings, with some of the world's best athletes delivering world class performances at venues across Europe, the United States and Asia.

In part one of our season review, we look back at the first four events of 2020. From the impossible via the inspirational to the downright historic, here are the highlights from an unforgettable year of Wanda Diamond League action.

After months of uncertainty, the athletics season finally got underway in June with Oslo's plan to stage "The Impossible Games", a socially-distanced track and field event held in full observation of Norway's coronavirus regulations. The audacious exhibition event proved not only to be entirely possible, but also a roaring success.

In another long-distance battle, Mondo Duplantis bettered Renaud Lavillenie via video link in the men's pole vault, clearing 5.86m to claim his first win in what would prove to be an historic outdoor season for the Swedish-American.

A month after the successful start in Oslo, Weltklasse Zurich delivered the second exhibition event of the summer with "The Inspiration Games", an equally inventive format which saw athletics superstars compete simultaneously in seven different venues across two continents.

Competing in Walnut. California while her rivals Shaunae Miller-Uibo and Mujinga Kambundji ran against her in Florida and Zurich respectively, US legend Allyson Felix claimed victory in the women's 150m with a solid 16.81.

Also in Walnut, Georganne Moline beat off her European rivals to win the women's 300m hurdles, while Noah Lyles briefly thought he had smashed Usain Bolt's 200m world record in Florida, only to find that the blocks had been placed at the wrong start line.

It wasn't until mid-August that the first fully competitive Wanda Diamond League meeting of the season took place, but boy, was Monaco worth the wait.

On a magical evening at the Stade Louis II, there were world leads for Hellen Obiri and Noah Lyles in the women's 5000m and men's 200m respectively, while Karsten Warholm came within a whisker of the 47-second barrier in the 400m hurdles. Mondo Duplantis, still warming up to his finest performance of the season, cleared six metres while barely breaking a sweat in the men's pole vault.

Yet the night ultimately belonged to Joshua Cheptegei, who set a new 5000m world record of 12:35.36, breaking the 16-year-old world record previously held by Kenenisa Bekele.

"Monaco is a special place," beamed Cheptegei after the race. It's hard to disagree.

It was Warholm who was back in the headlines in Stockholm a week later, as the Norwegian twice stormed around the track to claim a jaw-dropping double victory in the 400m hurdles and 400m flat.

Had he not clipped the final hurdle in the former, he may even have broken the world record. As it was, the Scandinavian superstar had to make do with a new European record of 46.87, beating his own previous mark by just 0.05s.

Fellow Scandi Duplantis also shone again on his home turf, clearing six metres for the second time in a week in the men's pole vault. There were also victories for Laura Muir and Timothy Cheruiyot in the 1500m races, while Yaroslava Mahuchikh beat her compatriot Yuliya Levchenko in a gripping duel in the women's high jump.