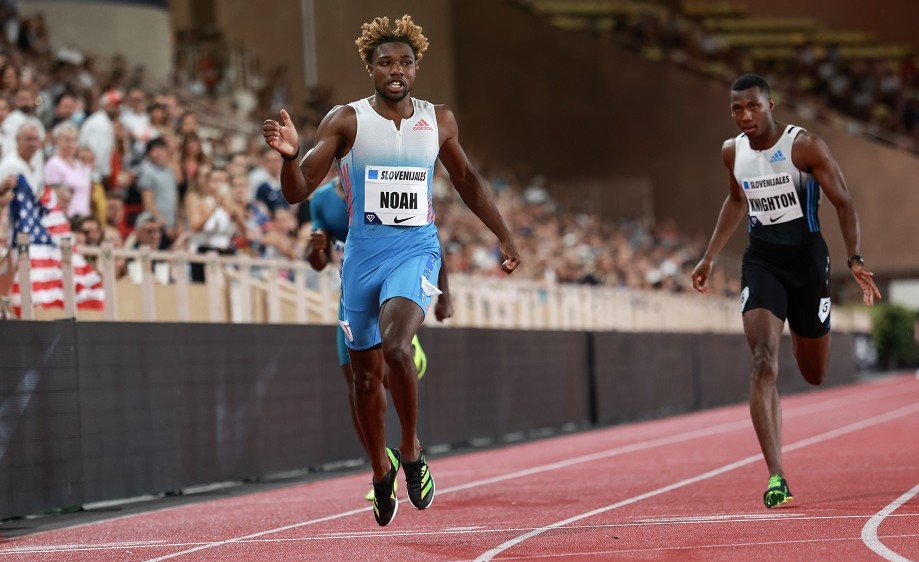 In the fourth part of our 2022 Wanda Diamond League season review, we look back at a string of series records and historic victories in Monaco, Lausanne and Brussels.

The 2022 season charged into the final bend in August, with athletes returning from the World Championships in Oregon to launch their final push for a place in the Wanda Diamond League Final. From series records to historic first-time victories, there were plenty of thrills and spills in Monaco, Lausanne and Brussels.

The Herculis meeting in Monaco has played host to some of the greatest performances in Diamond League history, and 2022 proved to be another sparkling year on the track at the Stade Louis II.

There were several meeting records, with Noah Lyles cruising to an impressive 19.45 in the men's 200m and Jake Wightman following up his 1500m heroics at the World Championships with a fine personal best of 2:18.33 in the 1000m.

In the women's sprints, meanwhile, Shelly-Ann Fraser-Pryce continued to go from strength to strength as she clocked a world-leading 10.62 in the 100m to smash the meeting record and fuel chatter about a potential world record. Coming in third behind her, Marie-Josée Ta Lou broke down in tears after setting a new African record of 10.72.

Just a year after Francine Niyonsaba became the first Burundian athlete to win the Diamond Trophy, her compatriot Thierry Ndikumwenayo made further history for his country with a national and Diamond League record of 7:25.93 in the men's 3000m. The victory meant that the race for the title in the long distance event remained wide open, with Ndikumwenayo becoming the sixth winner in six different meetings in the 3/5000m campaign.

History was also made in the women's 1500m, where Kenya's Faith Kipyegon came within 0.3 seconds of the world record set by Genzebe Dibaba at the same meeting seven years earlier. In the end, Kipyegon had to settle for 3:50.37 -- the second-fastest time ever, a personal best and a Kenyan record.

Read the full report from the Monaco Diamond League here

The Athletissima meeting in Lausanne began with a shock as Shelly-Ann Fraser-Pryce was forced to pull out of the 100m at the last minute due to a hamstring injury. The in-form Jamaican's absence left the door open to a surprise on the track, with Aleia Hobbs beating Shericka Jackson and Elaine Thompson-Herah in 10.87 to bag her place in the Diamond League Final.

Hobbs' victory meant it was a US double in the sprints, as Lyles continued his unbeaten run in the men's 200m, clocking a smooth 10.56 to pick up his third win en route to the Diamond League title.

Elsewhere on the track, Jakob Ingebrigtsen bounced back from his disappointment in Oregon to post a world lead of 3:29.05 in the men's 1500m, while there were meeting records for Francine Niyonsaba in the women's 3000m, Jasmine Camacho-Quinn in the 100m hurdles and Femke Bol in the women's 400m hurdles.

Mondo Duplantis also soared to victory in the pole vault, clearing 6.10m to snatch his fifth win and fourth meeting record of the season. But it was Neeraj Chopra who made the biggest headlines as he finally picked up his first ever victory on the Diamond League circuit. The Indian javelin star, who had come a narrow second to Anderson Peters in Stockholm, threw 89.08m to become the first athlete from his country ever to win a Diamond League meeting.

Read the full report from the Lausanne Diamond League here

As the summer began to fade, the world's best athletes headed to Brussels in early September for the final meeting before the Wanda Diamond League Final and a last chance to pick up points in their bid to qualify.

It proved to be a night of surprises and silver linings, as several world champions suffered shock defeats while a number of Oregon silver medallists bounced back with crucial victories in the Belgian capital.

Fraser-Pryce made a welcome return after her Lausanne setback but was forced to make do with second place after Shericka Jackson just caught her on the line in the 100m, while Mondo Duplantis suffered a rare off day, clearing only 5.81m to concede defeat to John Ernest Obiena in the pole vault.

Those who had just missed out on golden glory in Eugene, meanwhile, were among those who shone the brightest in Brussels. World 100m hurdles bronze medallist Jasmine Camacho-Quinn clocked a meeting record 12.27 to claim her sixth win of the season, while the USA's Kara Winger broke a national record with 68.11m in the women's javelin to take her first ever Diamond League win at the age of 36.

There were also world leads for Jacob Krop, who clocked 12:45.71 in the men's 5000m, and Yaroslava Mahuchikh, who bounced back from silver in Oregon to clear 2.05m and launch an attack on the world record. Though she couldn't quite clear the 2.10m mark, the win was a statement of intent from the Ukrainian ahead of the final, where she hoped to end the season with an outdoor global title for her country.

Read the full report from the Brussels Diamond League here