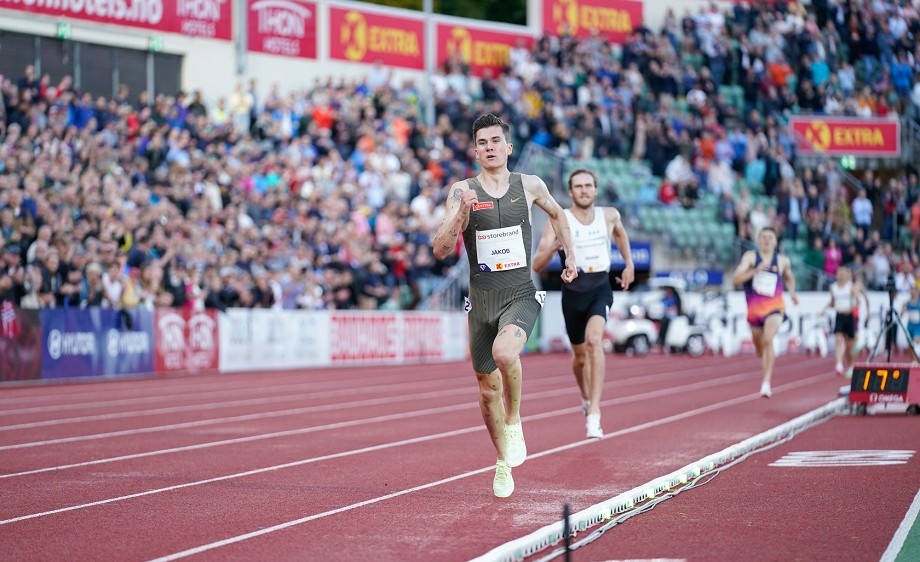 In the second part our 2022 Wanda Diamond League season review, we look back at Karsten Warholm's injury blow in Rabat, Shericka Jackson's statement win in Rome, and Jakob Ingebrigtsen's series record in Oslo.

As the world's best athletes take a well-earned break following the summer season, we're taking a look back at the best moments of the 2022 Wanda Diamond League campaign. In part two of our season review, it's Rabat, Rome and Oslo in the spotlight.

The fourth meeting of the season began with an earthquake in the men's 400m hurdles, as reigning Diamond League champion and world record holder Karsten Warholm pulled up just in front of the second barrier clutching his hamstring. The blow would prove a major setback for Warholm in a season in which he lost both his world and Diamond League titles to Brazil's Alison Dos Santos. With Warholm out at the first bend, the USA's Khallifah Rosser stormed to his first ever Diamond League win with a meeting record of 48.25.

Rosser was not the only one to pick up his first victory on the circuit in Rabat, as Ethiopia's Hirut Meshesha also did so with a personal best of 3:57.30 in the women's 1500m. His was also not the only meeting record at the Stade Prince Moulay Abdallah, with Jamaica's Elaine Thompson-Herah cruising to an impressive 10.83 in the women's 100m.

The star of the show, however, was home hero Soufiane El Bakkali, who brought the home crowd to their feet with a brilliant victory in the 3000m steeplechase. The Moroccan held off Lamecha Girma to clock a world lead and meeting record of 7:58.28 before collapsing to the floor draped in his country's flag on the finish line. It was El Bakkali's second win of the season, and a crucial step towards what would eventually be his first ever Diamond League title.

Read the full report from the Rabat Diamond League here.

Meshesa made it back-to-back wins a few days later as she clocked 4:03.79 at Rome's Stadio Olimpico. The fifth meeting of the season also saw first-time wins for US high jumper Juvaughn Harrison and Kenyan 5000m talent Nicholas Kipkorir Kimeli. Kimeli, who stormed to a world lead, meeting record and personal best of 12:46.33 in Rome, would go on to win the Diamond League title in Zurich, while Harrison would come within a whisker of doing the same in a thrilling battle with Gianmarco Tamberi.

In the men's shot put, Joe Kovacs also picked up his first win of a title-winning season, an impressive 21.85m effort proving the start of a five-meeting winning streak which would end with a series record and Diamond Trophy in Zurich.

Jasmine Camacho-Quinn also managed to break the Rome meeting record with a brilliant 12.37m in the women's 100m hurdles, while Athing Mu claimed victory in her first overseas Diamond League appearance with a world leading 1:57.01 in the women's 800m.

It was Jamaica's Shericka Jackson who put in the performance of the night, beating the likes of Elaine Thompson-Herah, Dina Asher-Smith and Shaunae Miller-Uibo with a meeting record of 21.91 in the women's 200m. It was the first of four Diamond League wins in 2022 for Jackson, who ended the year as both world and Diamond League champion for the first time in her career.

Read the full report from the Rome Diamond League here.

After Karsten Warholm broke the world record in front of his home crowd in 2021, fans at Oslo's Bislett Games were devastated to miss out on seeing him again after his injury in Rabat.

Yet there was still plenty to cheer for the home crowd as Jakob Ingebrigtsen stole the show with a Diamond League record, Norwegian record and world lead of 3:46.36 in the famous Dream Mile. It was Ingebrigtsen's first ever Dream Mile win, and his second win in a campaign which would see him claim his first ever Diamond Trophy.

He was not the only record-breaker in the Norwegian capital, as Dutch 400m hurdles star Femke Bol and Swedish pole vault legend Mondo Duplantis both broke meeting records with 52.61 and 6.02m respectively.

In Warholm's absence, it was Alison Dos Santos who cruised to victory in the men's 400m hurdles, picking up his third of seven wins in a title-winning 2022 campaign. Eventual Diamond League champion Chase Ealey also took another step towards her first title with a personal best of 20.13 in the women's shot put.

Read the full report from the Oslo Diamond League here.