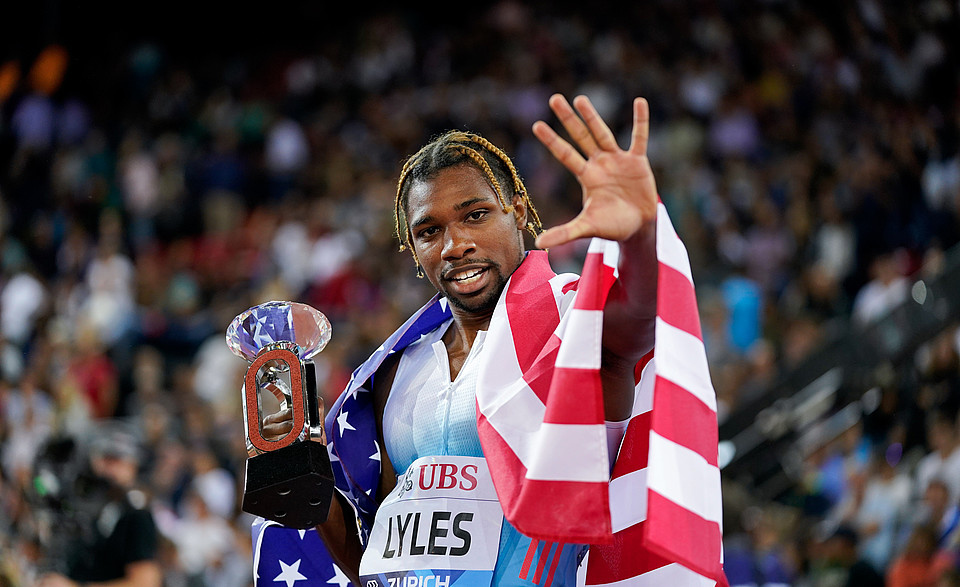 Noah Lyles broke a ten-year-old meeting record belonging to Usain Bolt as he claimed his fifth career Diamond Trophy at the Wanda Diamond League Final in Zurich on Thursday.

Several newly crowned world champions triumphed at the Wanda Diamond League Final in Zurich on Thursday but Tobi Amusan and Noah Lyles excelled when breaking long-standing Weltklasse meeting records that had previously been held by legends of the sport.

The 25-year-old is no stranger to breaking records – her world record of 12.12 was set in the semifinals at the World Championships in Oregon, where she went on to get gold, and her Commonwealth title was gained in a Games record. This time it was a meeting record that fell, Amusan running 12.29 to take a tenth of a second off the mark that had been set by USA’s multiple Olympic and world gold medallist Gail Devers in 2000.

It ensured a clear win, and in a field featuring a whole host of other global medallists it was USA’s 22-year-old Tia Jones, the 2018 world U20 champion, who secured second place in 12.40 – the second-fastest time of her career so far behind the 12.38 PB she set for the runner-up spot in Brussels. Jamaica’s world silver medallist Britany Anderson was third with 12.42, while Puerto Rico’s Olympic champion Jasmine Camacho-Quinn finished fourth in 12.49.

“Everyone has doubted me. I just had to prove myself, that I have got it,” said Amusan, who also won the African title this year. “I am just so thankful for all of this season. I am full of emotions. Now, vacation, rest and then back to practice.”

Lyles was also close to matching the kind of form he showed when winning at the World Championships.

The US sprinter, drawn in lane six, was already up on Olympic silver medallist and defending Diamond League champion Kenny Bednarek half way round the bend. By the time he entered the straight, Lyles was clearly ahead of the rest of the field – and that was before he’d unleashed his trademark strong finish.

He crossed the line in 19.52, an incredible half a second clear of his opponents, and broke Usain Bolt’s meeting record of 19.66 from 10 years ago.

Canada’s Aaron Brown placed second in a photofinish from Alexander Ogando of the Dominican Republic, both men clocking 20.02.

Just as she did at the World Championships, the Jamaican dominated the race to win in 21.80 from Olympic bronze medallist Gabby Thomas (22.38), who was returning to action following a mid-season injury.

Dominican Republic’s world and Olympic silver medallist Marileidy Paulino was the favourite going into the women’s 400m final and she lived up to that billing in style, running the race of her life to win the first Diamond League title of the second day of action in Zurich.

The fastest race in the world this season, the 25-year-old became the 12th athlete to ever dip under 49 seconds, clocking 48.99 for a clear win. She led the top three under 50 seconds, her compatriot and fellow world finalist Fiordaliza Cofil finishing second in 49.93 and world bronze medallist Sada Williams of Barbados placing third in 49.98.

Norway’s Olympic 1500m and world 5000m champion Jakob Ingebrigtsen missed out on this year’s world 1500m title but he wasn’t about to let the Diamond Trophy escape him.

Always in control, the 21-year-old – who rebounded to get 5000m gold in Oregon – ran a determined race and was never challenged as he took three hundredths from his own world lead to win in 3:29.02.

Such was the performance, it led to applause from his biggest rival in the race, Kenya’s 2019 world champion Timothy Cheruiyot, at the finish line. Cheruiyot, winner of the past four Diamond League titles, finished second in 3:30.27, while Australia’s Commonwealth champion Oliver Hoare was third in 3:30.59, the second-fastest 1500m of his career so far.

Content to follow the pacemaker through 400m in 54.19 and 800m in 1:51.41, Ingebrigtsen led through 1200m in 2:48.08 and eased away to add the Diamond Trophy to his hardware collection, which from this season also includes two more European titles won in Munich last month.

Emmanuel Korir was another world and Olympic champion to end his season with his fastest time of the year.

The world and Olympic 800m champion, who was rebounding from a loss in Brussels last weekend, timed his race to perfection here in Zurich. He held back from the early tempo, with the pacemaker leading the field through halfway in 50.41, then allowed world bronze medallist Marco Arop and world 1500m champion Jake Wightman to duel it out until the field hit the home straight.

Alison Dos Santos wrapped up a perfect year by notching up yet another victory – his 11th this year, including heats and finals – in the 400m hurdles.

The 22-year-old world champion had world finalist Khallifah Rosser for company up until they entered the home straight, but the long-striding Brazilian pulled clear in the final 100 metres, charging through the line in 46.98. It was a record-breaking third sub-47-second clocking of the year and just 0.06 shy of the meeting record set by Karsten Warholm in 2019.

Rosser held on to take second place in 47.76 with his US compatriot CJ Allen finishing third in 48.21.

“I am nearly invincible, and that is nice,” said Dos Santos. “I believe in myself and I have a lot of confidence. After Eugene, my life changed. Now I have a target, now I am world champion. Now everyone wants to beat me and I want to fight for the win.”

Femke Bol’s victory in the women’s event was similarly decisive.

The Dutch athlete, whose only loss this year came at the World Championships, achieved her fifth Diamond League victory of the season, holding off a strong challenge from former world record-holder Dalilah Muhammad, who had a slight lead for the first 300 metres. Bol kicked hard down the final stretch and won in 53.03 with Panama’s Gianna Woodruff coming through for second place (53.72).

Fraser-Pryce, Getachew and Holloway bounce back

There was seventh heaven for Shelly-Ann Fraser-Pryce in the 100m, Jamaica’s five-time world champion becoming the first athlete to run sub-10.70 on seven occasions in the same season.

“I am very proud that I came away with a 10.65. I started (the season) with a 10.6 and I finish with a 10.6, so there is nothing more I could ask for,” said Fraser-Pryce. She made a late decision to take her place in the final after the start date for her son Zyon starting back at school got pushed back. On where she will keep this fifth Diamond Trophy, she said: “In Zyon’s bedroom! Every year when I go to a championship, and I get a mascot or anything, I give it to him, so he has a tonne on his bed. So I’m going to add that to his collection.”

In a race that came down to the final barrier, it was Ethiopia’s Werkuha Getachew who won the battle, the world silver medallist powering away from Bahrain’s world fourth-place finisher Winfred Yavi, who stumbled in the final stages, to win the women’s 3000m steeplechase.

Getachew, national record-holder in both the 800m and 3000m steeplechase, used her two-lap speed to great effect, remaining calm as she chased Yavi from the bell. Yavi looked in control but similar to in the world final, where she just missed out on a medal, an awkward clearance of the final barrier saw her lose her momentum and Getachew took full advantage.

Getachew clocked 9:03.57 to win by almost a second ahead of Yavi in 9:04.47. Kenya’s Faith Cherotich, who won the world U20 title in Cali last month, improved her PB by three seconds to finish third in 9:06.14. Ethiopia’s 2021 world U20 silver medallist Zerfe Wondemagegn also ran a PB, clocking 9:06.37 for fourth, while their fellow teenager Jackline Chepkoech, Kenya’s Commonwealth champion and winner ahead of Getachew in Brussels last week, was fifth in 9:11.06.

He came and he conquered, USA’s two-time world 110m hurdles champion Grant Holloway following his second global win in Oregon with a first Diamond League title win in 13.02. The world indoor 60m hurdles record-holder had to settle for second in Szekesfehervar and third in Lausanne, both of those races won by Jamaica’s Rasheed Broadbell, but Holloway turned the tables when it mattered most.

Commonwealth champion Broadbell, unbeaten since missing out on the World Championships final by just 0.01, this time got the runner-up spot in 13.06, while Jamaica’s Olympic champion Hansle Parchment clinched third in 13.26.

“If one thing, I’m always consistent in what I do,” said Holloway. “From US Trials in June to a Diamond League Final in September, I always run 13.0. I’m happy to come out with the win, finally. It was actually my first time beating Broadbell. To come out here and compete at a high level in an intense field, it feels amazing.”

Trophies over times for Kipyegon

While she might have the world record in her sights, on Thursday night it was all about the win for Faith Kipyegon. On the hunt for her third Diamond Trophy, the two-time world and two-time Olympic champion was totally in control and confident in her kick. It all went to plan.

Running a blistering last lap, the 28-year-old crossed the finish line with 4:00.44 on the clock, winning by more than a second despite easing up on her approach to the finish. After her impressive national record-breaking win in Brussels, Ireland’s Ciara Mageean claimed second in 4:01.68, holding off Ethiopia’s world indoor 800m silver medallist Freweyni Hailu by 0.05. Ethiopia’s world 800m fourth-place finisher Diribe Welteji secured the same spot in this final, while Britain’s Olympic silver medallist Laura Muir was fifth and Ethiopia’s world 5000m champion and world indoor 1500m record-holder Gudaf Tsegay, who finished third in the Diamond League 5000m final the day before, was sixth.

“This was a really strong field, but I kept thinking it’s the last race of the season, and I took the opportunity to end it in a nice way,” said Kipyegon. “It has been a long season, and my legs are tired, but I think I still managed to run a good time, all things considered.”

Fellow Kenyan Mary Moraa ran a similarly well-controlled race in the women’s 800m to hold off a quality field to cap a memorable season, winning in 1:57.63.

The world bronze medallist and Commonwealth champion found herself in the lead once the pacemaker had done her duties. She kept her cool and did enough to finish comfortably ahead of Jamaica’s Natoya Goule (1:57.85) and USA’s Sage Hurta (1:58.47).

Third trophy for James, first for Bromell and El Bakkali

Grenada’s multiple world and Olympic medallist Kirani James clocked 44.26 to win his third Diamond Trophy over 400m, 11 years since his first. In that time, the 30-year-old has become an Olympic gold, silver and bronze medal-winner, completing the set with third place in Tokyo, and he secured silver in Oregon last month.

Ahead as he left the final bend, James held off a fast-finishing Bryce Deadmon, the US sprinter pipping his compatriot and fellow world and Olympic 4x400m gold medallist Vernon Norwood – 44.47 to 44.66.

“It is special for me to win here today after 11 years, when I also won in Zurich,” said James. “I have one more meeting coming. I try to enjoy every moment.”

Morocco’s Olympic and world 3000m steeplechase champion Soufiane El Bakkali finally got the win he had been craving. After five previous attempts, the event’s overwhelming favourite would not be denied the Diamond Trophy this time. Running 8:07.67, the 26-year-old won by almost a second ahead of Ethiopia’s 2019 Diamond League champion Getnet Wale, who clocked 8:08.56. Kenya’s Commonwealth champion Abraham Kibiwot was third in 8:08.61, with the rest of the field four seconds back.

Content to run near the back of the pack, which followed the pacemakers through 1000m in 2:40.32 and 2000m in 5:27.90, El Bakkali had no trouble easing away from his rivals to become the first Moroccan athlete to win a Diamond League title and maintain his unbeaten season.