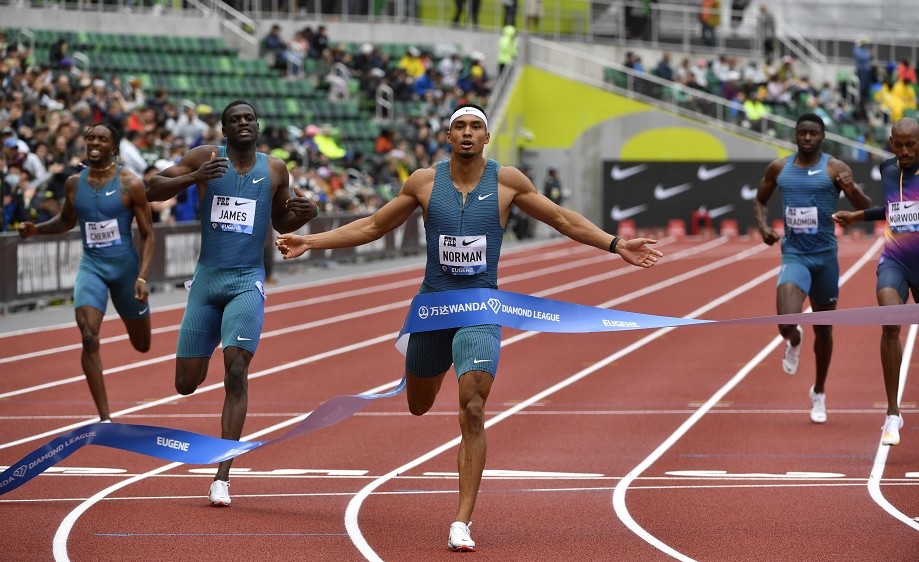 Shelly-Ann Fraser-Pryce and Michael Norman were on record-breaking form in the sprints in 2022, while Noah Lyles beat the fastest man in history at the Wanda Diamond League Final in Zurich.

2022 was an unforgettable year for the sprinters on the Wanda Diamond League circuit, with the Jamaicans pushing new boundaries in the women's events and the Americans toppling years-old records in the men's. In the first part of our "Best of 2022" series, we take a look back at some of the year's most memorable performances in the 100m, 200m and 400m.

For five years, Wayde Van Niekerk had maintained a firm grip on the 400m Diamond League record, with almost nobody getting within a sniff of the South African's 43.62 in Lausanne in 2017. That all changed this year, however, as Michael Norman soared around the new Hayward Field to clock 43.60 and hurl down the gauntlet ahead of the World Athletics Championships. He would be crowned world champion on the same track a few months later, and while he failed to claim the Diamond Trophy in Zurich, Norman could still look back on a successful Diamond League campaign come September. A new series record and a victory on home soil to boot, his brilliant run in Eugene made him one of the standout performers in the 400m.

Shericka Jackson was certainly no small fry when she launched her 2022 Diamond League campaign in May, but it wasn't until the Pietro Mennea Golden Gala in Rome that she began to establish herself as an undisputed favourite for the Diamond Trophy. In a highly anticipated 200m which included Olympic champion Elaine Thompson-Herah. US legend Allyson Felix and multiple Diamond League champion Shaunae Miller-Uibo, it was Jackson who prevailed with a dominant 21.91, a meeting record and a statement victory early in the season. She would go on to establish herself as one of the greats of an incredible Jamaican generation, claiming World Championship gold in Oregon and a first Diamond Trophy in Zurich.

It took three meetings for Shelly-Ann Fraser-Pryce to pick up her first points-scoring win in the 2022 Wanda Diamond League, but once she got points on the board, there was no looking back as the Jamaican legend notched up three separate meeting records on her way to a fifth Diamond Trophy in the second half of the season. The fastest of them came in Monaco, where she clocked 10.62 to pick up a world lead, meeting record and the third-fastest time in Diamond League history. Behind her in third place, Marie-Josée Ta Lou also made history with an African record of 10.72, the Ivorian clutching her head in disbelief as she crossed the finish line at the Stade Louis II.

Perhaps one of the most impressive performances of the season came in the men's 200m in Zurich. Noah Lyles had promised something special ahead of the Wanda Diamond League Final, and he delivered in style at the Letzigrund Stadium, jetpacking away from the rest of the field as he came out of the bend to win a fifth Diamond League title and break a meeting record which had been previously held by the fastest man in history, Usain Bolt. It was not just a historic victory, but an emphatic one, as Lyles shaved a full 0.14 seconds of Bolt's previously unbeatable 19.66, set at Weltklasse in 2012.