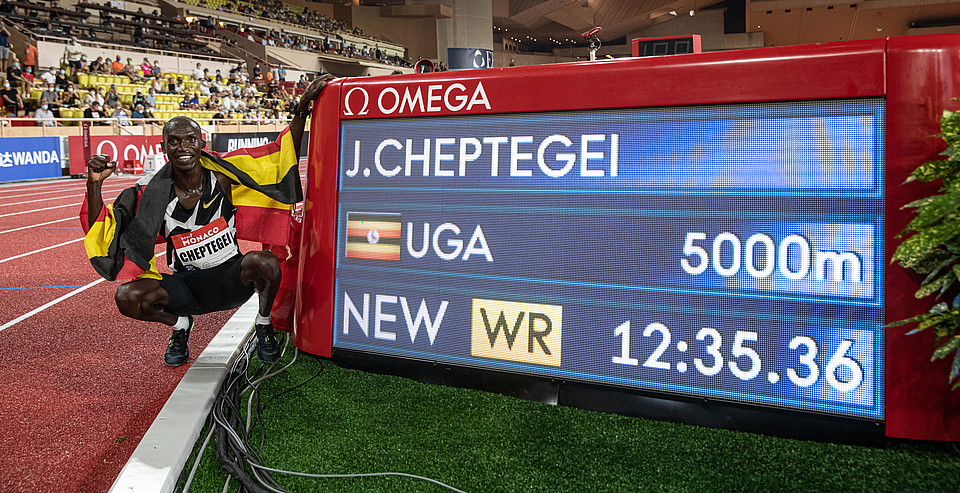 Joshua Cheptegei's 5000m world record last August was not the first time that history has been made at the Monaco Diamond League. Here's a look back at some of the most Herculean performances in the recent history of Herculis.

In a uniquely difficult season for everyone in track and field, the Wanda Diamond League meeting in Monaco provided a record-breaking, barrier-busting highlight at the height of the summer season.

Joshua Cheptegei's 5000m world record was a fitting climax to a meeting whose innovative approaches to the challenges of the pandemic saw it nominated this week for World Athletics' new COVID Inspiration Award.

Yet Cheptegei's 2020 exploits were not the first time that an athlete has been inspired to break barriers on the track of the Stade Louis II. In the last decade, the Diamond League has seen no fewer than three world records in Monaco.

2015 was a good year all round for Genzebe Dibaba, with the Ethiopian star crowned Diamond League champion and world champion in the 5000m over the course of the summer.

Yet her finest performance of the season came in the 1500m in Monaco, where she clocked 3:50.46 to smash a 22-year-old world record.

The Ethiopian's exploits made her only the second athlete to break a world record on the Diamond League circuit, but she would be by no means the last.

Four years after Dibaba's triumph in the 1500m, her long-time Dutch rival Sifan Hassan set a world record over an almost identical distance in the very same stadium.

Hassan had been on blistering form throughout 2019, having set a new 3000m Diamond League record in Stanford earlier that year, and would later go on to win the Diamond Trophy in both the 1500m and the 5000m.

Yet it was in the women's mile that the Dutch star shone in the Stade Louis II, clocking 4:12.33 to shave more than two-tenths of a second off the previous record set by Svetlana Masterkova in 1996.

A year later, it was Cheptegei's turn to shine. Having been crowned Diamond League champion in the 5000m and world champion in the 10,000m the season before, Cheptegei was the clear favourite as he headed into the 5000m in Monaco in the middle of a season ravaged by coronavirus restrictions.

Just getting to the race was enough of a challenge for the Ugandan star, who arrived in Monaco after an 80-hour journey which included two layovers and a charter flight arranged by his country's president.

Unfazed by the arduous trip, the Ugandan shaved 1.99 seconds off the previous record to set a new world record of 12:35.36 in Monaco.