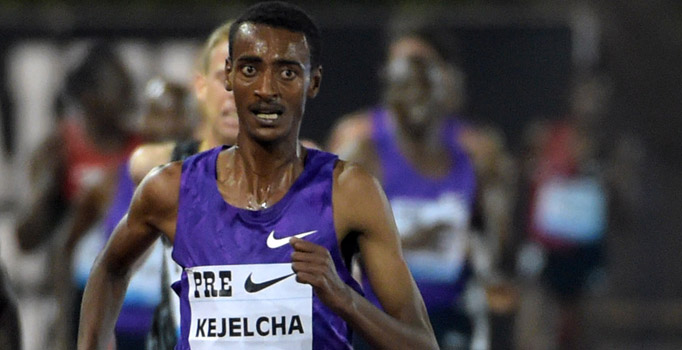 Ethiopian Yomif Kejelcha will return to the Prefontaine Classic as the youngest winner by far of the men’s 5000 meters, the favorite racing distance of Steve Prefontaine. And like Pre, Kejelcha is aiming for Olympic gold.

The Pre Classic 5K will once again feature a clash of the best from Ethiopia, Kenya, and the U.S. dominating a road to the Rio Olympics where only three from any country can qualify.

At 18, Yomif Kejelcha has already raced to unprecedented history.  At 16, he was the youngest winner ever in this event at the World Junior Championships in 2014, held at Hayward Field.  Last year’s victory made him the Pre Classic’s youngest 5K winner by four years and foreshadowed two more victories at IAAF Diamond League meets as he won the overall Diamond Race, once again the youngest ever.

Kejelcha was 4th in last year’s World Championships in Beijing, the only time yet he has lost to more than one person in a race.  He ended the year with the world’s fastest time at 12:53.98 and this year already has a major gold medal, winning the 3K at the World Indoor Championships in Portland.

Hagos Gebrhiwet, 21, is also at the top of Ethiopia’s incredibly deep list of the world’s best.  He edged ahead of Kejelcha in a back-and-forth duel on the homestretch to capture bronze in last year’s World Championships.  Two years earlier, Gebrhiwet displayed another memorable homestretch to earn silver in the 2013 World Championships, the best finish by an Ethiopian since world record holder Kenenisa Bekele won his last gold in 2009.

Prior to Kejelcha, Yenew Alamirew, 25, was Ethiopia’s top-ranked runner, earning No. 2 in the world by Track & Field News in 2014 and 2013.  He finished 2nd and 3rd, respectively, at the Pre Classic those years.  In 2013, Alamirew won the Diamond  Race in this event.

Kenyan runners have won the Pre Classic 5K more times (10) than any other country has in the last 20 years, and two of those Kenyans are the most recent champions preceding Kejelcha.

Caleb Ndiku, 23, earned the silver medal in last summer’s World Championships in Beijing.  He won the Pre Classic 5K in 2014, the year he also won the IAAF Diamond League title.  In his first Pre Classic appearance in 2011, Ndiku joined the sub-3:50 club with a 3:49.77 in the Bowerman Mile.  It is still his fastest mile ever.

Edwin Soi, 30, has the best set of finishes of anyone in the last three Pre Classic 5Ks – 1st, 2nd, and 3rd.  He is the 2008 Olympic bronze medalist seeking a third berth on the Kenyan Olympic team, having also made the 2012 squad.  Soi was a finalist in the last two World Championships and has been world ranked by T&FN among the world's top 10 eight times since 2006.

Thomas Longosiwa, 34, matched Soi’s Olympic bronze in this event in a wild finish at London and then just missed a medal in a similar sprint at the 2013 Moscow World Championships, taking 4th in a 3-4-5 Kenyan finish.  He did not earn a spot on the Kenyan World Championships team for Beijing, but finished as the top Kenyan in last year’s T&FN world rankings – at No. 4, matching his highest.

Isiah Koech, 22, is the only Kenyan 5K runner on the last three Olympic/World Championships Kenyan teams, topped by a bronze medal finish as a 20-year-old in the 2013 Moscow World Championships.  At age 19 in 2012, Koech was the youngest before Kejelcha last year to win the Diamond League title in this event.

Geoffrey Kamworor, 23, will make his Pre Classic debut at 5K a major event.  He is best known for two gold medals at the World Half-Marathon Championships (this year and in ’14) as well as another at last year’s World Cross Country Championships.  On the track, he is the silver medalist in the 10K from last year’s Beijing World Championships.  Kamworor has displayed incredible range – PRing in last year’s Pre Classic 10K at 26:52.65, then two weeks later running a lifetime best in the 1500 of 3:40.7 at an altitude of some 5500+ feet (over 1700 meters).

American Ben True, 30, is a Dartmouth grad who was world ranked last year No. 6 by T&FN.  That ranking matched his finish at last year’s World Championships as well as in the 2013 World Cross Country Championships.  True completed a difficult double at last year’s U.S. championships, finishing 2nd in both the 5K and 10K.

Ryan Hill, 26, earned the silver medal in the 3k at the recent World Indoor Championships at Portland.  He has won every U.S. title he’s run since last year indoors, collecting three in total.  Hill has made the final of the last two 5K World Championships, both with fellow Americans Rupp and Bernard Lagat.

Bernard Lagat, 41, will be competing in his 16th (yes, sixteenth) Prefontaine Classic.  He has carved a major slice of Pre Classic history. Lagat owns more Pre Classic titles at men’s distances above 1500 meters (5) than anyone except steeplechase Hall of Famer Henry Marsh (7).  He is the only American to win major world golds in the 1500 and 5k in the same year (2007).  Lagat won his seventh U.S. 5k crown in 2014, giving him the most in history.  His Masters record book contains references to some of the sport’s most iconic personalities:

It’s possible the field will also have local favorite Galen Rupp, the American Olympic 10K silver medalist from London.  Rupp, who won the U.S. Olympic marathon trials in February, is committed to running at the Pre Classic, but the distance has yet to be decided.