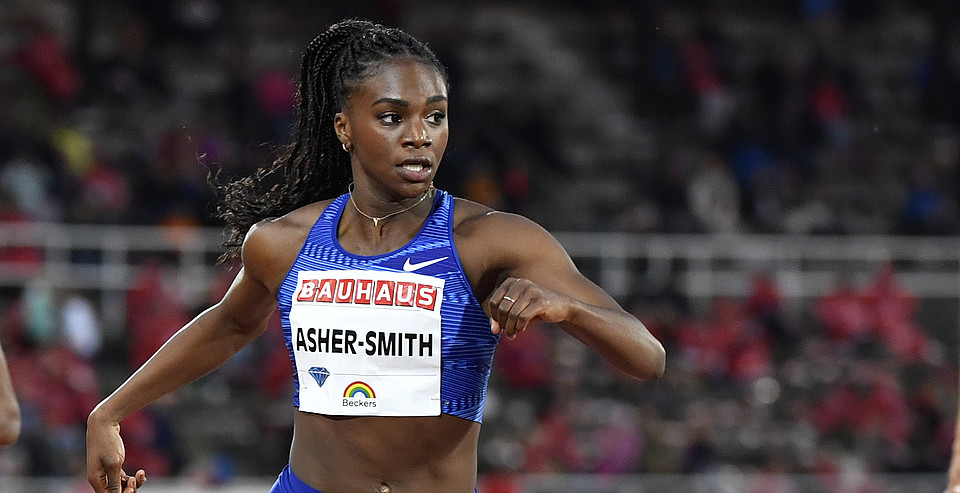 The field boasts IAAF Diamond League winners in three events along with the reigning world champions in the 100 and 200 meters, last year’s fastest in both sprints, and a three-time Pre Classic winner.

The field boasts IAAF Diamond League winners in three events along with the reigning world champions in the 100 and 200 meters, last year’s fastest in both sprints, and a three-time Pre Classic winner. Three have been world ranked No. 1 and every sprinter has ranked no lower than No. 5.

Dina Asher-Smith, 23, was the world’s fastest sprinter last year, setting British records in both the 100 (10.85) and 200 (21.89) meters en route to her country’s first sweep of sprint golds by a woman or man at the European Championships in Berlin.

The 2018 season was Asher-Smith’s best in other measures. She made the Track & Field News 100-meter world rankings for the first time, and her No. 4 there combined with a No. 2 in the 200 rates as Great Britain’s best showing by a woman since 1977, when Sonia Lannaman was No. 2 in both sprints.

Asher-Smith has reached every World/Olympic finals in the 200 since 2015, a year after winning World Junior (U20) 100 gold in Eugene. This year Asher-Smith already has two Diamond League victories in the 200, winning at Doha and Stockholm.

Dafne Schippers, who will turn 27 on June 15, is the two-time defending World Championships gold medalist in the 200. The Dutch speedster owns the European record at 21.63, the world’s fastest low-altitude mark since Florence Griffith Joyner’s 21.34 world record at the 1988 Olympics.

Schippers has been world ranked by T&FN in both sprints since 2014, and in the 200 she has been in the top 3 all five years. She won the Diamond League title in 2016, when she was silver medalist at Rio, and was the Diamond League runner-up last year. Her first major medal came in the heptathlon, where she owns a PR of 6545 points and claimed bronze in the 2013 Moscow Worlds.

After two-straight Diamond League titles in the 100, Thompson missed most of last summer yet still ranked No. 3 in the world by T&FN in the 100. She has shown impressive form this year, winning the Rome Diamond League 100 in 10.89.

Tori Bowie, 28, won the London Worlds 100 after Olympic silver at Rio and has ranked No. 2 in the world three times in the 100 by T&FN. In the 200 she earned bronze in 2016, leaving Rio with two individual medals, the only American woman with any in the sprints. She anchored the U.S. 4x100 to gold from lane 1 in the world’s second-fastest time ever.

Her last race on the track ended in pain at the Pre Classic a year ago, but she appears to be recovering well – even long jumping (22-3/6.78) in April for the first time since the 2014 Pre Classic (she won her only NCAA titles in the long jump, sweeping the 2011 indoor/outdoor while at Southern Mississippi).

Salwa Eid Naser, 21, is the reigning Diamond League champion at 400 meters, where she owns a best of 49.08. She earned silver in the London Worlds – Bahrain’s best major finish since Maryam Yusuf Jamal, whose London Olympic 1500 bronze has since been elevated to gold. Eid Naser has already won two Diamond League 400 races, winning in Shanghai and last week in Rome. She set Bahrain’s national record in the 200 last month in China at 22.56, her third PR of the year after not running the event since 2016.

Shericka Jackson, 24, was the top-ranked Jamaican last year at No. 4 in the T&FNworld rankings. That ranking – her first in the 200 – matched the best she achieved in the 400 in 2016, when she was Rio bronze medalist. She was also bronze medalist in the Beijing Worlds 400. Last year she earned silver in the Commonwealth Games 200, finishing ahead of Asher-Smith and Thompson.

The last open lane will be filled by the athlete performing the best in the next two weeks.

Tickets for the 45th annual edition of the Prefontaine Classic, to be held June 30 at Cobb Track & Angell Field in Stanford, Calif., are available now by clicking here or at gostanford.com/tickets. Customers may select their exact seats using the pick-your-own map. Tickets can also be ordered over the phone by calling 1-800-STANFORD.

Media can apply for working credentials online at portal.diamondleague.com. Additional media accreditation questions can be sent to media@preclassic.com.

The Prefontaine Classic is the longest-running outdoor invitational track & field meet in America and is part of the elite IAAF Diamond League of meets held worldwide annually. Sponsored by NIKE continuously since 1984, the Pre Classic will be shown live to an international audience by NBC.

Stanford University has a proud track & field tradition that dates back to 1893. In addition to its 922 All-America honors, 64 Olympians, and four NCAA team titles, Stanford has played host to important meets throughout its history, including the 1941 NCAA Championships, 1932 and 1960 U.S. Olympic Trials, and the epic 1962 USA-USSR dual that has been described as “the greatest track meet of all time.” After the facility was renovated in 1996, Cobb Track & Angell Field has been the site of the 2002 and ’03 U.S. Championships and is annually home to the Payton Jordan Invitational, the nation’s premier distance running carnival.

Steve Prefontaine is a legend in the sport of track & field and is the most inspirational distance runner in American history. He set a national high school 2-mile record (8:41.5) while at Marshfield High School in Coos Bay, Oregon, that is the fastest ever in a National Federation-sanctioned race. While competing for the University of Oregon, he won national cross country championships (3) and outdoor track 3-Mile/5000-meter championships (4), and never lost a collegiate track race at any distance. As a collegiate junior, he made the 1972 U.S. Olympic Team and nearly won an Olympic medal, finishing 4th in the 5K at the 1972 Munich Olympics, at age 21. After finishing college in 1973 and preparing for a return to the Olympics in 1976, he continued to improve, setting many American records. His life ended tragically on May 30, 1975, the result of an auto accident, at age 24. The Pre Classic began that year and has been held every year since.