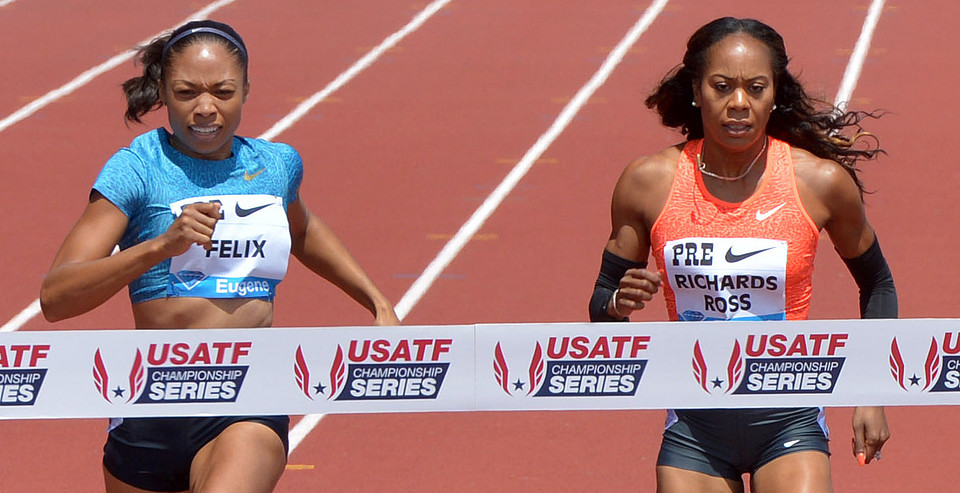 Allyson Felix and Sanya Richards-Ross are among America’s most decorated athletes and their road to more Olympic gold begins at the Prefontaine Classic in the women’s 400 meters.

The race will be the Pre Classic’s best ever in this event.  Seven of the confirmed runners have at least one major gold medal and seven have run sub-50.  Five comprised the top 5 in last year’s Track & Field News world rankings and two 22-year-olds are current world leaders, including another one-lap event.

Much of the attention will include Felix and Richards-Ross, who have both been world ranked since they were teenagers in 2003.  One or the other has been the top American in this event in nine of the last 10 years.

Allyson Felix, 30, owns 20 major medals, equal to Carl Lewis for the most in history by an American at the Olympics or World Championships.  She is aiming for a rare achievement this summer at the Rio Olympics – a 200/400 Olympic gold medal double.  It was last achieved in 1996 by Michael Johnson and Marie-Jose Perec, and the only other was by Valerie Brisco-Hooks in 1984.

Felix is no stranger to Olympic history – in the 2012 London Games she became the first women’s triple gold medalist since Florence Griffith Joyner in 1988, scoring in the 200 and both relays.  Last year Felix ran her lifetime best of 49.26 to win the World Championships in Beijing and ranked No. 1 in the world by T&FN for the first time in the 400 since 2010.  In the 200, she clocked her eighth career sub-22 and finished No. 2 in the world, just missing a record eighth No. 1.

Sanya Richards-Ross, 31, owns 14 major medals, the most by an American behind Lewis and Felix.  The American record holder in the 400, she is the only American woman with two major gold medals in this event (2012 Olympics, 2009 Worlds).  She has won twice as many U.S. outdoor titles (6) as any other woman and has been ranked No. 1 in the world five times by T&FN – only Felix has more than one.

Richards-Ross has 49 career sub-50 efforts to date, the most in history.  Four of those were recorded at Hayward Field, where she is the only runner with more than one.  She has won this event five times at the Pre Classic, the only athlete with more than two.

Shaunae Miller, 22, is this year's early world leader at 49.69, the fastest ever run in her home country of Bahamas.  The time was just 0.02 off her personal best, set winning the silver medal at last year’s Beijing World Championships.  The only faster Bahamians in this event have Olympic gold medals – Tonique Williams-Darling (2004) and Pauline Davis-Thompson (2000 in the 200).

Francena McCorory, 27, won the IAAF Diamond League trophy last year in this event, the first by an American since Felix in 2010.  McCorory is the only American to rank among the top 10 in the world by T&FN in each of the last six years, topped by a No. 2 in 2014 and a No. 3 last year.  She owns four major golds, including the 2014 World Indoor.  McCorory won her first national title at Hayward Field for Hampton University in the 2010 NCAA Championships.Natasha Hastings, 29, has earned 11 major medals, seven of them gold.  In 2013, she was the top-ranked American by T&FN, the only time in the last 10 years that Felix or Richards-Ross were not.  For Hastings, it was the beginning of a resurgence that began in 2007, when she first broke sub-50.  She is a three-time U.S. champion.

Jamaica’s Stephenie Ann McPherson, 27, was ranked No. 4 in the world for the second straight year by T&FN.  A member of last year’s gold-medal winning 4x400 team for Jamaica in the World Championships, she finished 4th in the recent World Indoor Championships.

Quanera Hayes, 24, might be America’s least-known gold medalist.  She ran second leg on the U.S. team on the gold-medal 4x400 team at the World Indoor Championships in Portland after having already earned bronze in the 400 on her own.  She is a three-time NCAA Division II champ from Livingstone College in North Carolina.  Hayes ran a PR 49.91 behind Miller's world-leading mark.

Ashley Spencer, 22, ran her PR 50.28 at Hayward Field in winning her second NCAA title while at Illinois in 2013.  She was silver medalist in the World Indoor Championships in Portland, then anchored the gold-medal U.S. 4x400 team.  Last weekend she lowered her PR in the 400-meter hurdles by 1.62 seconds with a world-leading 54.70.