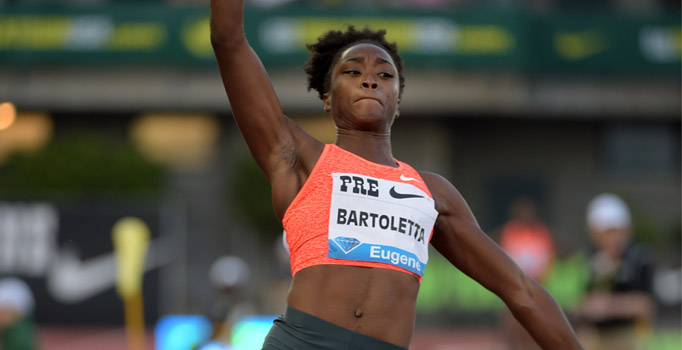 Every major international championship gold medalist since 2009 is confirmed for the Prefontaine Classic’s women’s long jump, and the field includes three silver medalists looking to move up to the gold-medal club at the Rio Olympics.

Bartoletta earned her third major gold by leading off the world-record setting U.S. 4x100 team at the London Olympics.  It was just a part of her best season as a sprinter, as she finished 4th in the Olympic 100 in a PR 10.85.  Winner of last year’s Pre Classic long jump, Bartoletta has claimed the last two Diamond League titles in the event.

Brittney Reese, 29, won her seventh major gold with a meet record at the recent World Indoor Championships in Portland.  It marked a return to the top for Reese, who struggled last year with a back injury.  Her best at Portland was just over an inch shy of her PR 23-9½ (7.25) – the farthest any woman has leapt since 2004.

The London Olympic gold medalist, Reese (whose Twitter handle is, appropriately enough, DaLJBeast)  was the dominant jumper from 2009-13, earning five straight No. 1 world rankings by Track & Field News – the only one with that long a streak at the top.  Already the only American besides Jackie Joyner-Kersee with an Olympic gold medal, with a win at the Rio Olympics, Reese would join Heike Drechsler as the only two-time gold medalists.

France’s Eloyse Lesueur, 27, is the only other jumper in the field besides Bartoletta and Reese with a major gold or a T&FN world No. 1 ranking.  She achieved both in 2014, the year she won the World Indoor Championships.  The two-time reigning European champion, Lesueur returns after missing the 2015 outdoor season with a knee injury.

Shara Proctor, 27, became Great Britain’s first 7-meter jumper with her silver medal at last year’s Beijing World Championships, jumping 23-2½ (7.07).  It was her best medal yet, topping the bronze at the 2012 World Indoor Championships.  The 2013 Diamond League winner, Proctor is the only one in the field besides Reese to have been world ranked in each of the last four years by T&FN.

Canada’s Christabel Nettey is the youngest in the field at 24.  She won the Pan-American Games gold last summer in Toronto, then finished an agonizing 4th at both last summer’s World Championships and this winter’s World Indoor Championships.  She was ranked No. 4 in the world last year by T&FN, becoming the first Canadian ever in this event.

Ivana Spanovic of Serbia will turn 26 on May 10 and already owns four major medals, topped by her silver at the World Indoor Championships in Portland with a lifetime best 23-2½ (7.07).  She was bronze medalist in the last two outdoor World Championships, as well as the 2014 World Indoor.  Since 2013, Spanovic has been world ranked no lower than No. 4 by T&FN.

Janay DeLoach, 30, is the third American in the field and looking at a strong start.  In the last Olympic year, DeLoach won silver at the World Indoor Championships and bronze at London, giving the U.S. its only two-medal showing in the Olympics along with Reese’s gold.  At the recent World Indoor Championships in Portland, DeLoach was less than two inches from a bronze medal, taking 4th.