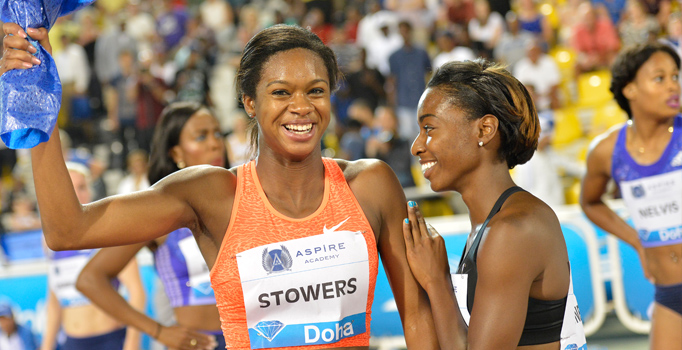 How good will the Prefontaine Classic women’s 100 hurdles be? So good that because of the 3-per-nation restriction at the Olympics, it’ll be deeper than the Games final. That’s because five superstar Americans—including the world’s four fastest since the London Games, plus the world’s No. 1 ranker from the last two years—will be meeting for the first time in the same race on U.S. soil. Whew!

Dawn Harper-Nelson has won the last four IAAF Diamond League titles, equaling the most for a woman in any event.  She is among America’s most successful hurdlers, winning Olympic gold in 2008 at Beijing, then silver at London in 2012.  She was ranked No. 1 in the world the last two years by Track & Field News.

Three of Harper-Nelson’s four U.S. titles were achieved at Hayward Field, including last year when she ran 12.48, her best on U.S. soil.  Harper-Nelson, who will turn 32 in May, has been known to run best when it counts the most, and her Olympic gold and silver medals are the best ever won by an American in this event. She spent much of the winter working on revamping her start.

American record holder at 12.26, Brianna Rollins, 24, is the youngest gold medalist in this event at the World Championships, winning in 2013 at Moscow a day before turning 22.  Just outside of another medal at last year’s World Championships, she claimed silver in last month’s World Indoor 60-meter version after winning her first U.S. title since rating No. 1 in the world in 2013.  Coach Lawrence Johnson says, “This is the year that we get back to doing some of the things she was doing in '13, but doing them better.”

Jasmin Stowers, 24, has run 12.40 or better more times than anyone in the last two years, setting her best of 12.35 in her Diamond League debut at Doha last year.  She won the most Diamond League titles last year (3) in a season in which all were claimed by Americans.  She was ranked No. 3 in the world rankings last year by T&FN.

Sharika Nelvis, 25, owns the two fastest wind-legal times at Hayward Field, both recorded in last year’s U.S. championships at 12.34 and 12.37, making her the only hurdler with more than two under 12.40 at Hayward Field.  The Arkansas State grad is one of the few women who uses only 7 steps to the first hurdle. Her hard-charging  performances earned her the No. 2 ranking in the world last year from T&FN.

Kendra Harrison, 23, is the youngest in the field. She is also 2016’s fastest, firing a 12.36 for April’s best in history to lead this year’s world list.  Last year after winning the NCAA title, Keni rested some 45 minutes, then ran a PR 54.09 in the 400 hurdles, losing by just 0.35 seconds to eventual World Championships silver medalist Shamier Little.

Nia Ali, 27, is already a two-time World Indoor gold medalist, winning her second straight 60-meter version at the last month’s World Indoor Championships in Portland.  The most versatile of the athletes in the field, she raised her heptathlon PR to 5870 in mid-April.

Tiffany Porter, 28, earned the bronze medal at the 2013 Moscow World Championships.  Born in Ypsilanti, Michigan, Porter is a dual British and American citizen who competes for Great Britain.  She won five NCAA titles at Michigan.

Alina Talay, who will turn 27 on May 14, earned the bronze medal with her Belarusian record at last summer’s World Championships in Beijing.

It's an epic collection of talent, most of it home-grown, in a race that will be a preview of the Olympic Trials and Olympic Games.