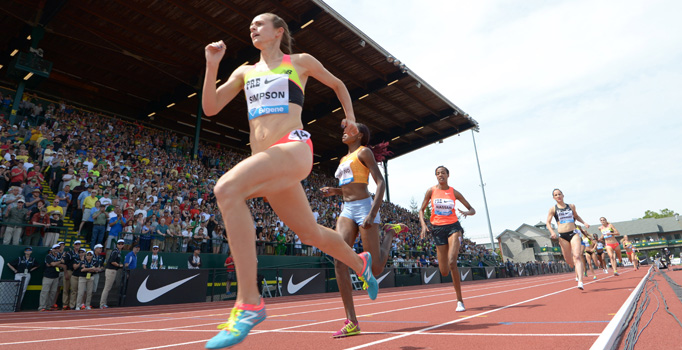 Jenny Simpson and Shannon Rowbury have one of America’s most intense rivalries and their recordbook writing will take on an Olympic theme in the women’s 1500 meters at the Prefontaine Classic.

The fans will have an eye on the two Americans, each of whom is looking to become the first U.S. Olympic medalist ever in the event this summer in Rio.  Both sub-4 performers, they are the most dominant Americans over the last seven years, a stretch that has seen one or both rank among the world’s top 10 every year by Track & Field News (four times one has been in the top 3).  Head-to-head, Simpson has a commanding 17-7 edge over Rowbury, but they are 2-2 in Olympic/World finals.

Overall, the event will showcase five sub-4:00 racers in a tremendous field that also includes the reigning World Indoor champion, Kenya’s two fastest ever, and an Ethiopian duo led by a 19-year-old who is already a World bronze medalist.  The field wants to run fast and can challenge the Hayward Field record of 3:57.05 as well as equaling the most sub-4 runners in one race on U.S. soil (5, from the 2014 Pre Classic).

Jenny Simpson, 29, is the defending Pre Classic winner and fastest-ever American at Hayward Field, but her accomplishments go around the globe.  She is one of only two American gold medalists in this event, capturing the 2011 World Championships title (matching Mary Slaney, who won in 1983).

Simpson’s total of six career sub-4 races is second among Americans only to Slaney (8), and she is the only American with more than one sub-4 performance at Hayward Field. Her first sub-4 came at the '09 Pre, where she established the still-standing Collegiate Record for Colorado. Simpson won that World Championships gold in 2011, though her best season came in 2014, when she won the IAAF Diamond League and was ranked No. 1 in the world by T&FN.  She was formcharted for a medal in Beijing last year, but lost a shoe midway through the race.

Rowbury has ranked among the world’s top 10 by T&FN in six of the last seven years, including four times as the top American.  Like last year, she won the Millrose Games’ Women’s Wanamaker Mile, but this year followed it with a bronze medal at the World Indoor Championships in Portland.

Sifan Hassan, 23, of the Netherlands is the fastest in the field at 3:56.05 and won gold at last month’s World Indoor Championships in Portland.  Born in Ethiopia, she began competing for the Netherlands in 2014, world ranking No. 2 (2014) and No. 3 (2015) by T&FN.  Hassan was fifth in 2014’s fantastic Pre Classic, when five ran sub-4.  Last year, she improved to 3rd but finished the season as the Diamond League winner.

Gudaf Tsegay is a 19-year-old from Ethiopia.  She has already won two championships medals in the state of Oregon, most recently at the Portland World Indoors, where Tsegay earned bronze.  She is still eligible for Junior records and her PR of 4:01.81 in February is the best by any Junior ever indoors.

Axumawit Embaye, 21, is an Ethiopian who already has Pre Classic experience, finishing 5th in last year’s race.  She followed countrymate Tsegay at the Portland World Indoors, taking 4th.  In 2014, Embaye was silver medalist at the World Indoor Championships.

Kerri Gallagher, 26, is an American who has lowered her lifetime best by over 15 seconds since graduating from Fordham University in 2011.  The third member of the U.S. team in Beijing last summer, she will be making her debut in the Pre Classic.  Her post-collegiate coach is Matt Centrowitz, a four-time winner of the Pre Classic 5K and father of world indoor 1500-meter gold medalist Matthew Centrowitz.

American Brenda Martinez, 28, is known mostly as an 800-meter runner, earning a bronze medal at the 2013 World Championships with a best of 1:57.91.  But in 2013 and ’14, she was ranked No. 3 in the U.S. in this event by T&FN behind Simpson and Rowbury.  This year she won the U.S. Indoor title in the 1500 and finished 5th as the top American in the World Indoor Championships in Portland.

Rababe Arafi, 25, of Morocco finished just outside of the medals in last summer’s Beijing World Championships, taking 4th in the 800.  She also was a finalist in the 1500.

Great Britain’s Laura Weightman earned the bronze medal in the 2014 European Championships and then the silver in the Commonwealth Games later that summer.

Renata Plis is a six-time Polish champion in distances ranging from 800 to 3000 meters.  She has been her country’s fastest 1500 runner in each of the last five years.

In sum, this year's Prefontaine Classic women's 1500 features potentially the best field in the 41-year history of the meet.