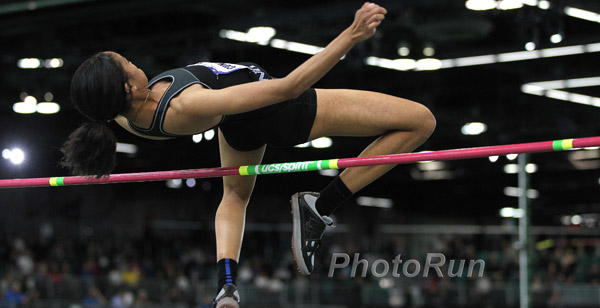 Vashti Cunningham has the world eager to see more of the youngest woman to ever win a gold medal at the World Indoor Championships. The Prefontaine Classic is set to be her outdoor pro debut as she continues on the road to the Rio Olympics.

Her competition at the Pre Classic looks like a preview of the Olympic Games,  as the field will include the top 4 high jumpers from the recent World Indoor in Portland, where all cleared the same height of 6-5 (1.96).  Cunningham earned the gold by virtue of having no misses.

Vashti Cunningham, 18, has soared to records every year of her high school career, owning the best ever in all four prep classes.  Now a senior at Bishop Gorman High School in Las Vegas, Nevada, Cunningham’s first-ever indoor season produced a world-leading 6-6¼ (1.99), merely the best in the world by an 18-year-old in more than 25 years and the best ever indoors.  Only three other Americans of any age have ever jumped higher indoors.

Both Cunningham and her coach see higher heights, openly talking of 6-7 (2.01) and 6-8 (2.03) this year.  Her coach is her father, Randall Cunningham, known best as an all-pro NFL quarterback with dazzling athletic ability.  The dad was a 6-10 (2.08) jumper as a prep before concentrating solely on football.

Vashti is part of one of the world’s best high jumping families.  Her brother, Randall II, is two years older and an All-American at the University of Southern California – he raised his PR to 7-5 (2.26) during the recent indoor season.  The siblings made history last summer by each winning gold medals in the high jump at the Pan-American Junior Championships in Edmonton, Canada.

Ruth Beitia, 37, may be twice the age of Cunningham, but she is the closest at matching her this year – she earned her second silver at the recent World Indoor Championships.  Beitia is also the reigning Diamond League winner and will be seeking a third-straight European Championships gold in preparation for the Rio Olympics.  At the 2012 London Olympics, Beitia finished 4th, the best ever by a Spaniard in this event.

Poland’s Kamila Licwinko, 30, is a former World Indoor gold medalist, winning the 2014 edition before settling for a bronze this year.  She equaled her outdoor national record of 6-6¼ (1.99) at last year’s World Championships in Beijing, finishing 4th.

Airine Palsyte, 23, of Lithuania also cleared 6-5 (1.96) at the Portland World Indoors.  Due to earlier misses, she was the only one at 6-5 without a medal.  She won last summer’s World University Games in China.  Palsyte has held her country’s national record since she was 19, when she first jumped 6-5 to claim silver in the 2011 World University Games.

Levern Spencer, 31, is from the small island of St. Lucia.  With a best of 6-6 (1.98), she is the highest jumper from the Caribbean outside of Cuba.  Twice her country’s flagbearer at the Olympics, she won St. Lucia’s first gold medal at last summer’s Pan-American Games.  Spencer is a former NCAA Division II champion while at Albany State College in Georgia.

Germany’s Marie-Laurence Jungfleisch, 25, cleared her PR of 6-6¼ (1.99) last summer with her best finish to date in a major international, taking 6th in the World Championships at Beijing.