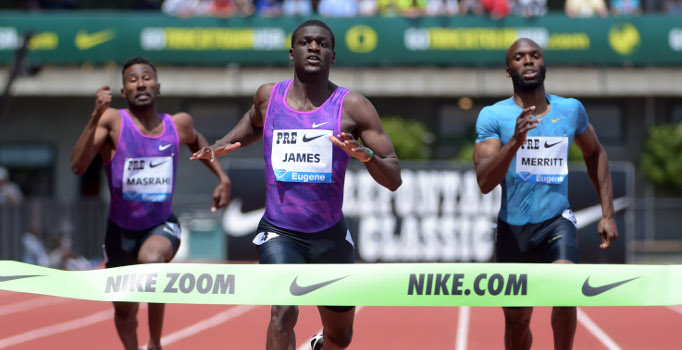 The men’s 400-meter rivalry between Kirani James and LaShawn Merritt will return to the Prefontaine Classic for a record fifth time, and after sub-44 races the last two years, it’s possible one of the oldest records in meet history could take a tumble.

The record in question is a venerable one, the 43.92 set by Michael Johnson in 2000 in his final race at Hayward Field in winning his second Pre Classic 400. The mark, made less than a year after he set the World Record of 43.18, stands as the second oldest men’s meet record.

Both James and Merritt join Johnson as the only multiple Pre Classic winners in this event.  The field is its fastest ever, bolstered by a record five runners who have run sub-44.

Kirani James, still only 23, is the two-time defending Pre Classic champion and is the only runner with more than one sub-44 clocking at the Pre Classic.  He won last year’s race at 43.95 after taking the 2014 title in 43.97, both over Merritt.  At the recent Drake Relays, James took the early world lead at 44.08 with a victory over Merritt to increase his career head-to-head lead to 11-7.

The 2014 finish was the meet’s most exciting ever, as both James and Merritt finished with the same time of 43.97, then the fastest same-time finish in the event.  James had won their first matchup as an 18-year-old at the 2011 World Championships in Daegu, defeating the then-reigning Olympic and World Championships gold medalist Merritt in a stirring homestretch battle.  The victory (by just 0.03 seconds) made James a national hero in his native Grenada.  A year later in London, James became the tiny island’s first Olympic gold medalist in any event.

LaShawn Merritt, 29, owns as many Pre Classic 400 wins (4) as James and Johnson combined.  He also has four runner-up finishes – the lowest position he has ever placed at the Pre Classic.  Merritt is running faster than ever, clocking 19.78 in the 200 in Nassau last month to break an almost 9-year-old PR.  He lowered his 400 best to 43.65 in taking the silver at the Beijing World Championships last summer.

At 19, Abdalleleh Haroun, of Qatar is the youngest runner in the race.  In March in Portland he became the youngest medalist in this event at the World Indoor Championships, earning silver.  A month earlier he became the first sub-minute man in the indoor 500 meters, running a world record 59.83 in Stockholm.

Machel Cedenio, 20, of Trinidad was the youngest finalist in last year’s World Championships in Beijing, finishing 7th.  He also anchored his country’s 4x400 team to a silver medal, matching the finish by the 2001 4x100 team.  In 2014, he won gold at Hayward Field in the World Junior Championships.

Steven Gardiner, 20, of the Bahamas is only in his second year of serious 400-meter running.  In his first year, he set the national record of 44.27 at age 19 to win his first national title.

Until last year, the 43.97 same-time finish by James and Merritt in the 2014 Pre Classic was the fastest close finish anywhere in the world.  That changed in the first-round heats at Beijing in last summer’s World Championships.  Saudi Arabia’s Youssef Ahmed Masrahi and Jamaica’s Rusheen McDonald both ran 43.93 to finish 1-2 in the same heat.  It was a PR by a half-second or more for each.  Masrahi eventually made the final, taking 8th.

McDonald, 23, is Jamaica’s only sub-44 runner and a three time national runner-up.  He has run on his country’s most successful 4x400 teams, including leadoff as a 20-year-old in 2013 at the Moscow World Championships, where Jamaica earned silver.