Obiri and McSweyn shine in Doha 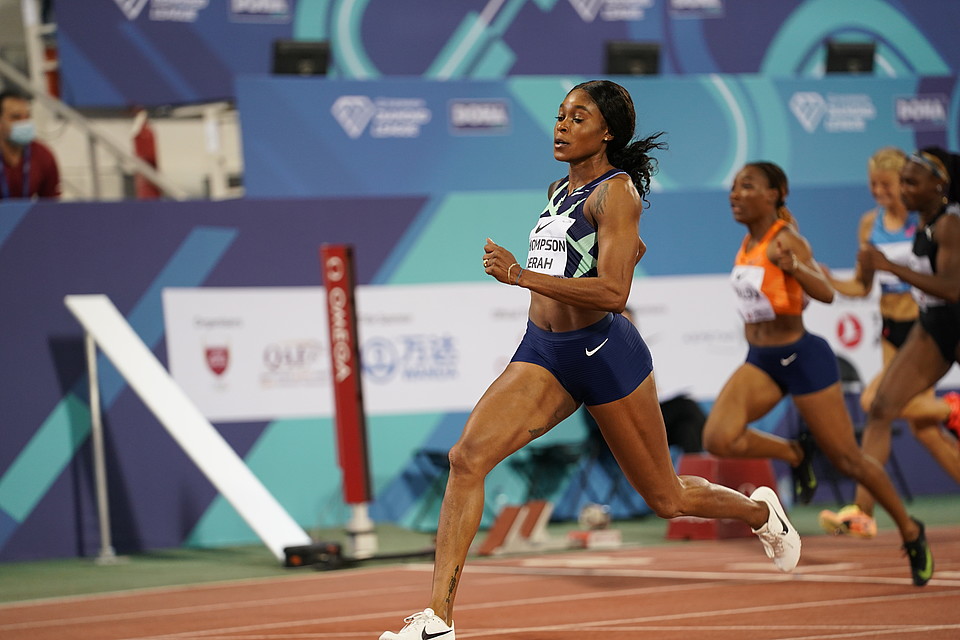 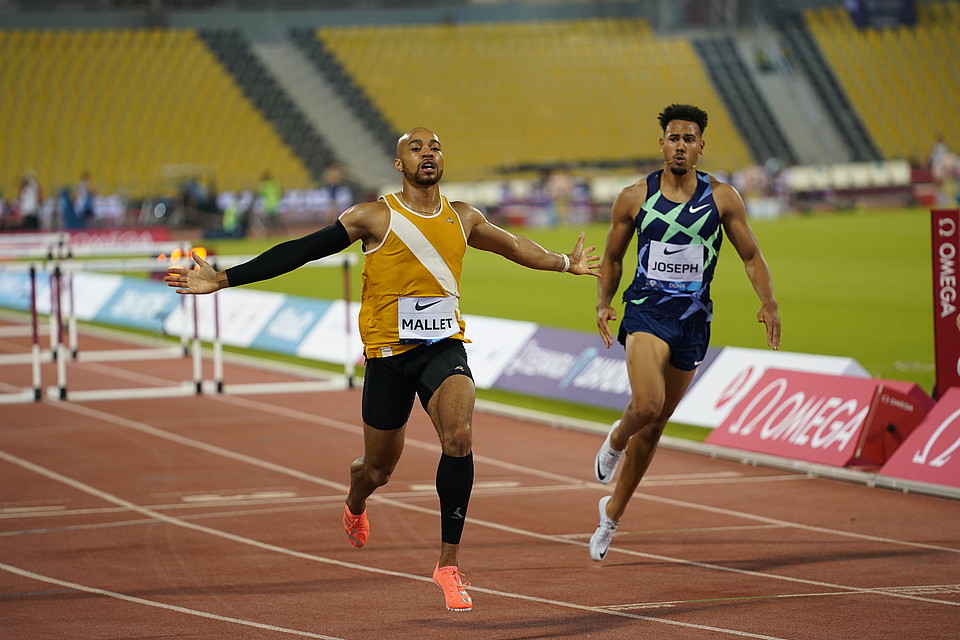 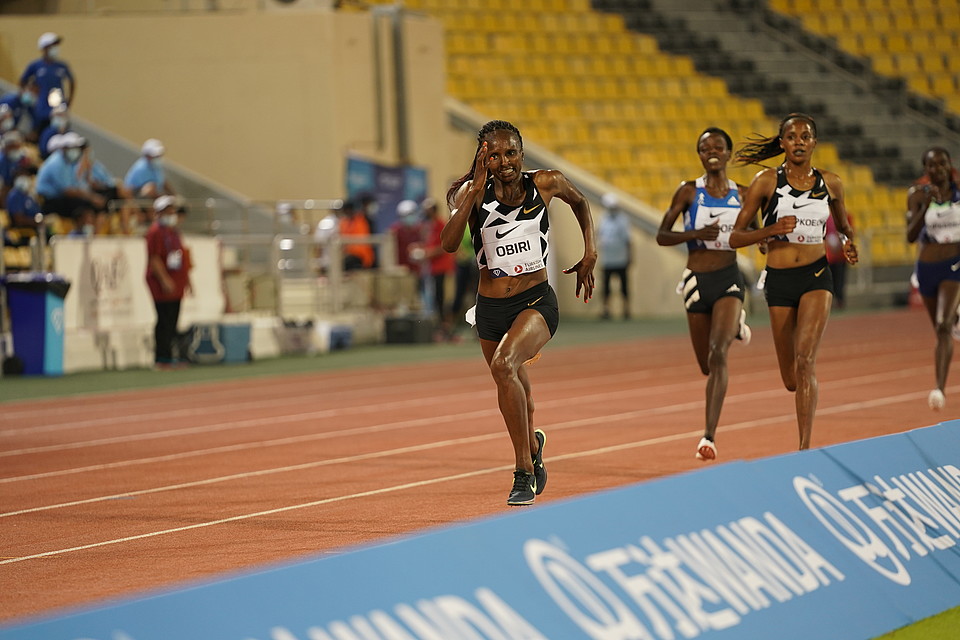 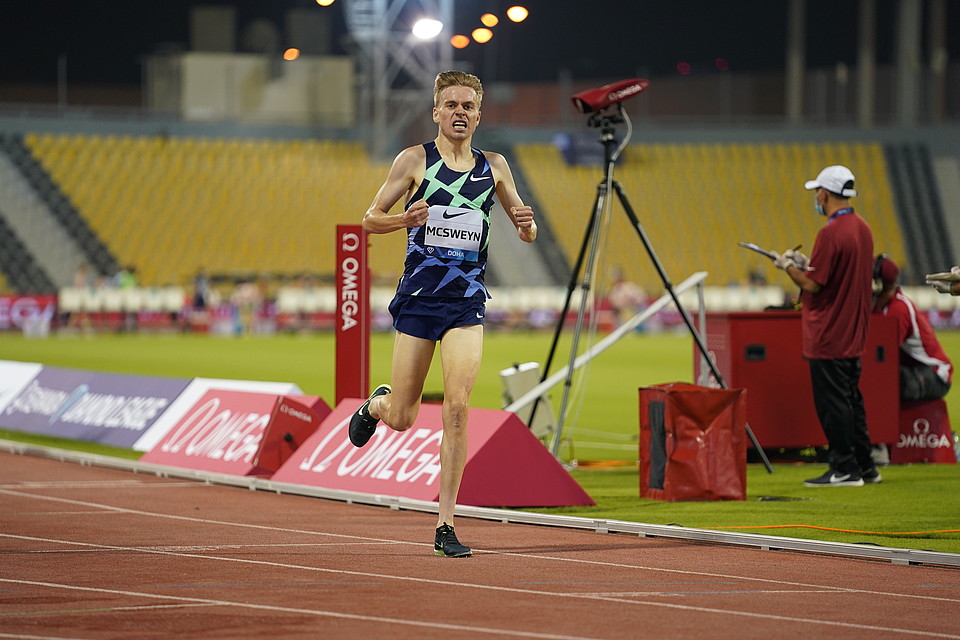 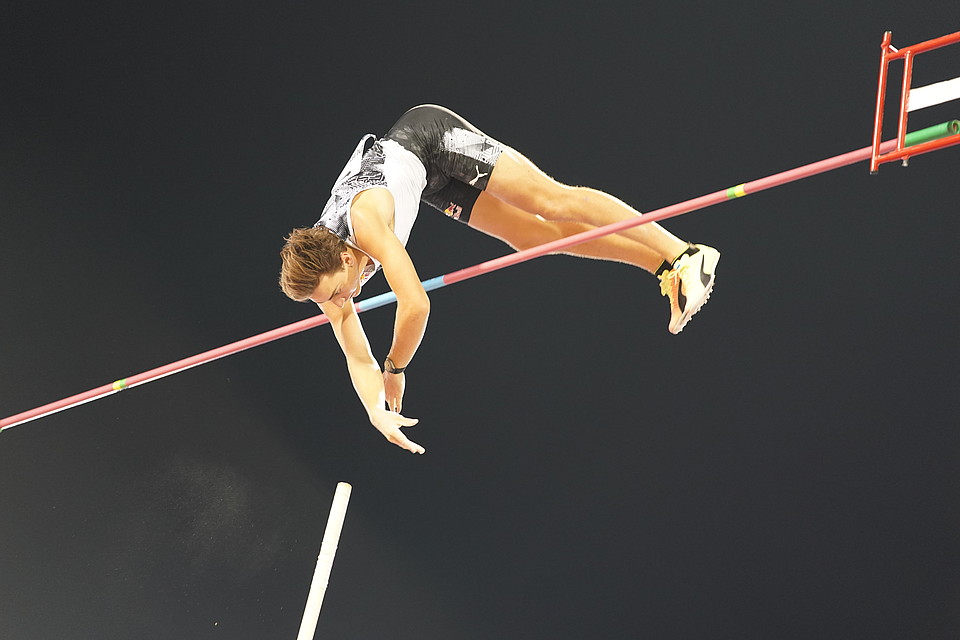 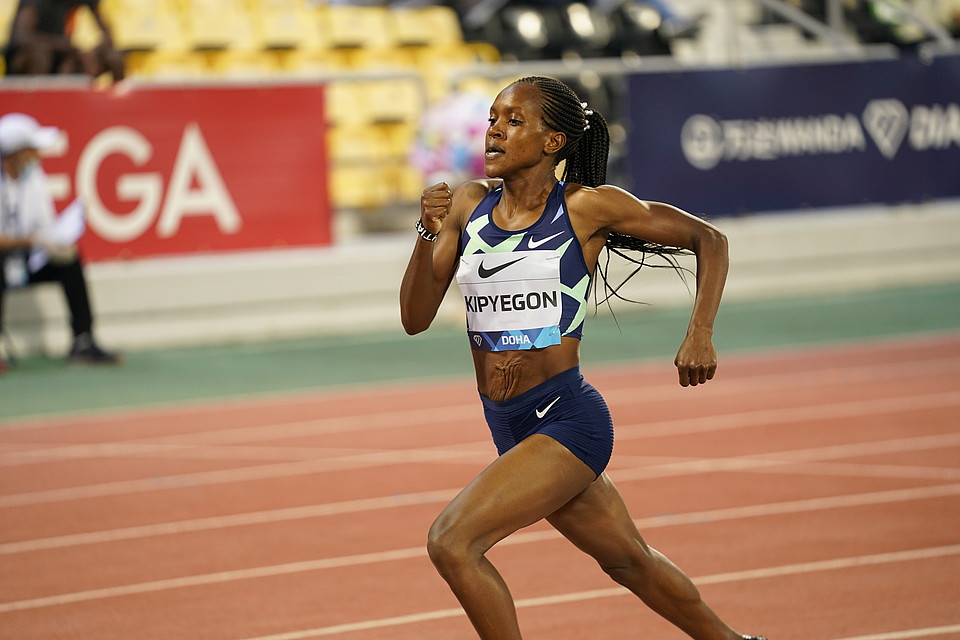 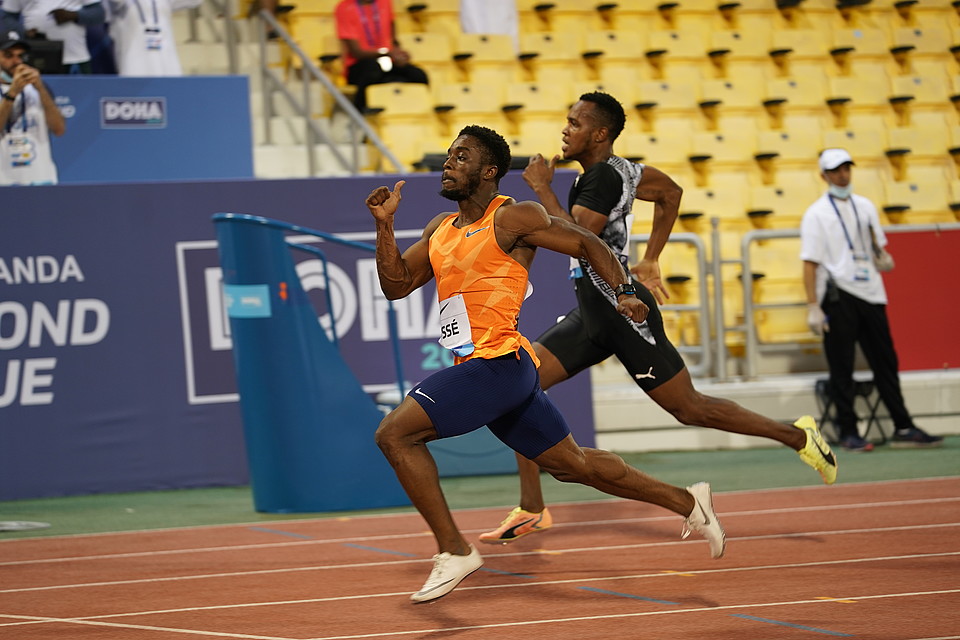 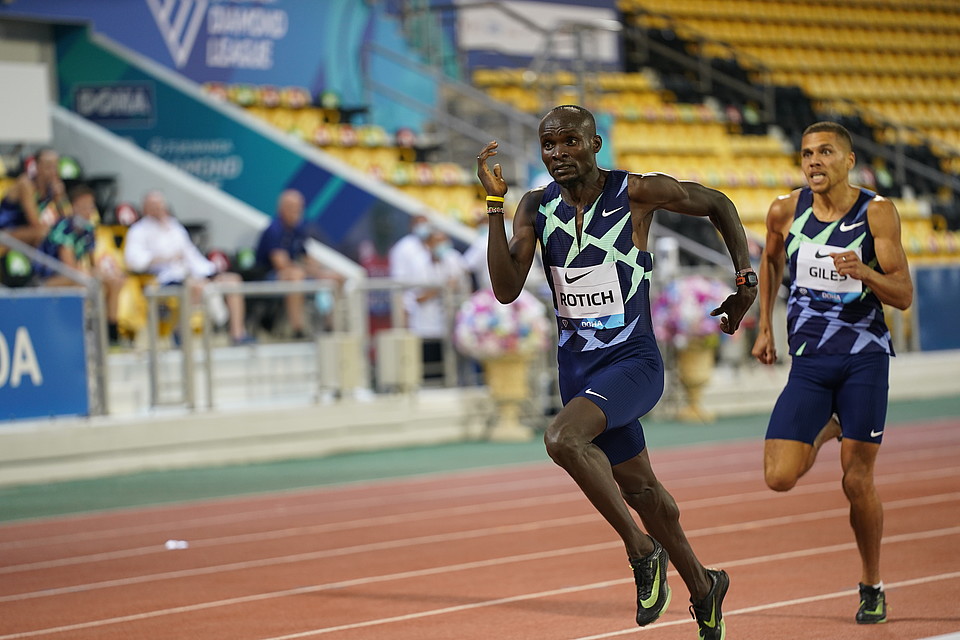 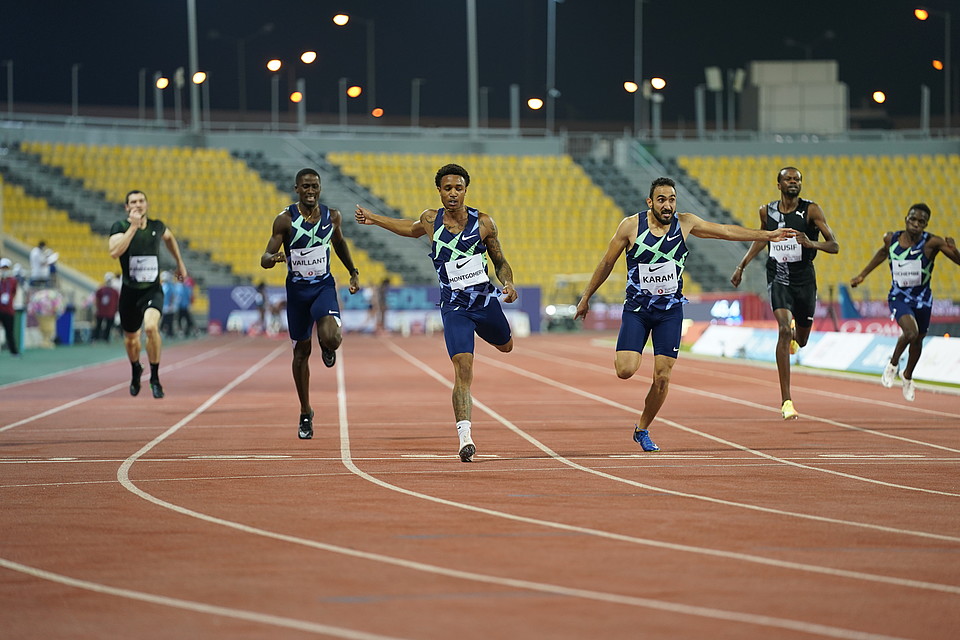 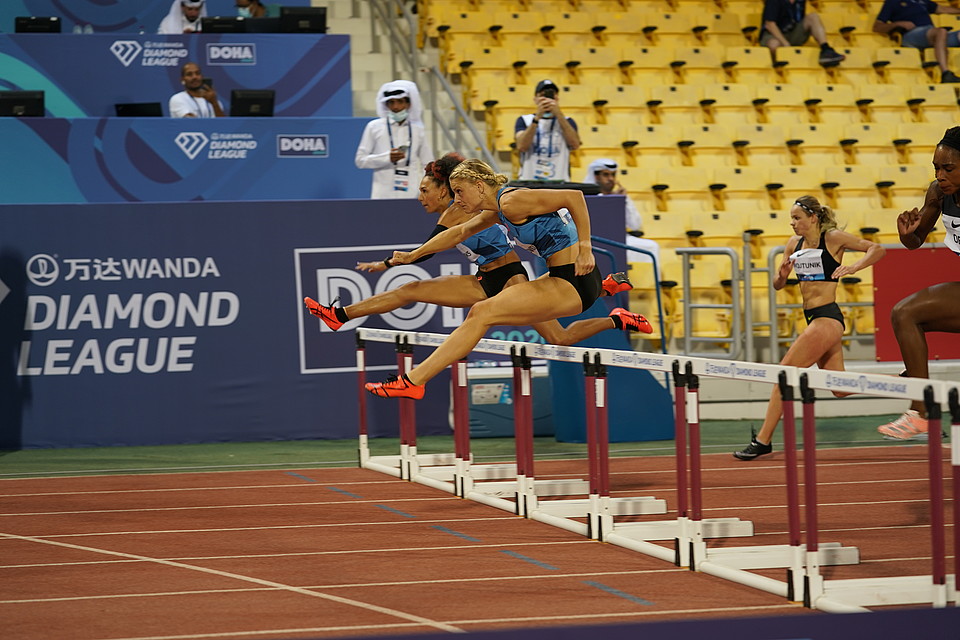 Both Hellen Obiri and Faith Kipyegon set new world leads on the track at the final meeting of the 2020 Wanda Diamond League season in Doha.

With about 90 seconds to go in the women’s 3000m at the Wanda Diamond League meeting in Doha on Friday (25), it looked as though Hellen Obiri would register a rare defeat in the Qatari capital.

Little more than 24 hours earlier, the world cross-country champion from Kenya had explained how Doha was one of her favourite cities to race in, having set her 3000m PB here in 2014 and retained her world 5000m title last year in the Khalifa Stadium.

But when world steeplechase champion Beatrice Chepkoech breezed into the lead with about 550 metres left in tonight’s 3000m race, Obiri kept her cool for another 200 metres before she unleashed her trademark kick for home, eventually winning in a world-leading 8:22.54.

The field of 15 women, loaded with world and Olympic medallists, was paced through the first kilometre in 2:48.46. Obiri and Chepkoech were tucked behind the pacemaker with world 10,000m bronze medallist Agnes Tirop and world 5000m silver medallist Margaret Chelimo Kipkemboi also near the front of the tightly-bunched pack.

After the pacemaker dropped out at the 1600m point, Obiri led the pack and reached 2000m in 5:39.70, the pace having slowed slightly. Eight women were still in contention with two laps to go with Obiri, Chepkoech, Tirop and Kipkemboi still occupying the first four places.

Chepkoech made her move as she entered the home straight for the penultimate time, but Obiri responded with about 350 metres remaining, her head rocking and arms fighting, as is often her style at the end of races.

Tirop and Chepkoech made up some ground in the final stages, but Obiri held on to win in 8:22.54, the second-fastest time of her career behind the 8:20.68 African outdoor record she set on this track six years ago.

The next five women to cross the line were all rewarded with PBs. Tirop and Chepkoech finished second and third respectively, both timed at 8:22.92, while Kipkemboi (8:24.76) and 2015 world steeplechase champion Hyvin Kiyeng (8:25.13) were fourth and fifth. For the first time in history, seven women finished inside 8:27.

“Doha has become like a second home to me as I've won so many races here, including the World Championships last year,” said Obiri. "The season has not been the best for everyone but I am happy it is coming to an end."

Lifetime bests for McSweyn and Kipyegon

Stewart McSweyn has been one of the most prolific performances on the international circuit this year, racking up seven races within six weeks. Having finished sixth over 5000m in Monaco, third over 1500m in Stockholm and third over 3000m in Rome, the Australian capped his 2020 Diamond League campaign with a victory.

But on this occasion, winning was McSweyn’s secondary goal. His main target was to break the Australian 1500m record of 3:31.06 that had stood to Ryan Gregson for 10 years. He had come close to that mark in Stockholm last month with 3:31.48, and backed it up with a 3:32.17 win in Zagreb 10 days ago.

Some way behind, Kenya’s Bethwell Birgen led the chase pack for the first couple of laps before world steeplechase bronze medallist Soufiane El Bakkali moved to the front of the group. But out in front, McSweyn was away and clear, with his 1200m split of 2:49.14 suggesting that he was still on pace to break the national record.

McSweyn, showing some signs of fatigue but still comfortably ahead of the chasers, strode clear and crossed the line in 3:30.51, punching the air with delight as soon as he realised he’d taken half a second off Gregson’s record.

“I wasn't in the best of shape coming into this race but to win tonight is something I am very delighted about,” said McSweyn. “I just wanted to race again considering how this season has been. It was a very competitive race but I executed my plan quite well and I maintained the pace. I’m happy to be heading home with a win in Doha.”

For the fourth time in as many races, Olympic 1500m champion Faith Kipyegon produced a dominant run to maintain her unbeaten streak this year.

Contesting the 800m for the first time in five years, the 26-year-old Kenyan was in the middle of the pack for the first lap as the pacemaker led the field through half way in 57.72. Spain’s Esther Guerrero then took up the running as Kipyegon navigated her way through the pack, hitting the front with 200 metres to go.

She increased her pace all the way to the finish, charging through the line in a world-leading PB of 1:57.68. In second, Guerrero was rewarded with a PB of 1:59.22, the first sub-two-minute clocking of her career, while Adelle Tracey took third place in 1:59.87.

“I’m so grateful and so happy to win here,” said Kipyegon. “Yesterday when I saw the pacemaker was aiming for 1:57 pace, I was so nervous. I was really surprised I had that kick.”

The men’s 800m played out in similar fashion with world bronze medallist Ferguson Cheruiyot Rotich taking command on the back straight before striding ahead to victory. After a 50.83-second opening lap, Britain’s Elliot Giles led until about 300 metres to go when Rotich hit the front.

The 30-year-old Kenyan eased away from the rest of the field and crossed the line in a season’s best of 1:44.16, recording his fifth consecutive win. Giles was second in a PB of 1:44.56.

Replicating her performance in Rome last week – almost to the hundredth – double Olympic champion Elaine Thompson-Herah was a comfortable winner of the women’s 100m.

The Jamaican started strongly and could simply not be caught, powering through the line in 10.87 (0.0). Multiple world medallist Marie-Josee Ta Lou was second in 11.21, just 0.04 ahead of USA’s Kayla White.

It ended up being the hardest-fought victory of his incredible 2020 season, but Mondo Duplantis emerged the winner of the pole vault.

A first-time clearance at 5.71m gave him a slight edge over arch-rivals Sam Kendricks and Renaud Lavillenie. The three men skipped 5.77m and went straight to 5.82m, which Duplantis cleared on his first try, while Kendricks and Lavillenie needed three attempts. It meant the trio equalled the meeting record that had been set by Konstantinos Filippidis back in 2013.

They were all unsuccessful at 5.92m; Duplantis saved his final effort for an attempt at 6.00m, but was unsuccessful once more. But the 20-year-old Swede was certainly not down-hearted to come up short of another six-metre vault.

“It’s been a fantastic season and I enjoyed sharing the moment tonight with the guys,” he said. “We’ve not been able to see each other this season as we often do due to obvious reasons. Tonight's win is for my sister who is celebrating her 18th birthday.”

The expected three-way clash in the men’s 110m hurdles didn’t quite materialise after USA’s Freddie Crittenden was a non-starter and France’s Wilhem Belocian was disqualified for a false start. But US indoor champion Aaron Mallet didn’t appear to be hampered by the absence of his leading opponents and he put together the race of his life to win in a PB of 13.15 (0.3m/s). Swiss record-holder Jason Joseph was third in 13.40.

World silver medallist Maryna Bekh-Romanchuk saved her best for last in the long jump – which proved doubly beneficial as the event adopted the ‘last round counts’ format. The Ukrainian leapt 6.91m (0.6m/s) to beat world bronze medallist Ese Brume and Khaddi Sagnia. Brume’s superior final-round effort (6.68m) meant she finished ahead of Sagnia, even though the Swede had jumped farther (6.85m) earlier in the competition.

Ten days after winning at the Continental Tour Gold meeting in Zagreb, USA’s Payton Chadwick notched up another victory in the women’s 100m hurdles. Cindy Ofili started well but faded over the final few barriers, while Taliyah Brooks finished strongly, but Chadwick held on to win in 12.78. Brooks was second in a PB of 12.86.

Earlier in the evening, Arthur Cisse took almost half a second off his PB to win the 200m in an Ivorian record of 20.23 in his first race over the distance since May 2018. Since the start of 2019, Cisse has now set national records for 60m, 100m and 200m – all of which had previously been held by Ben Youssef Meite, the only other Ivorian man to win at a Diamond League meeting.

USA’s Kahmari Montgomery finished strongly in the 400m, overtaking Asian champion Yousef Karam on the final bend before going on to win in 45.55. Karam was second in 45.72.