Rabat: What You Missed 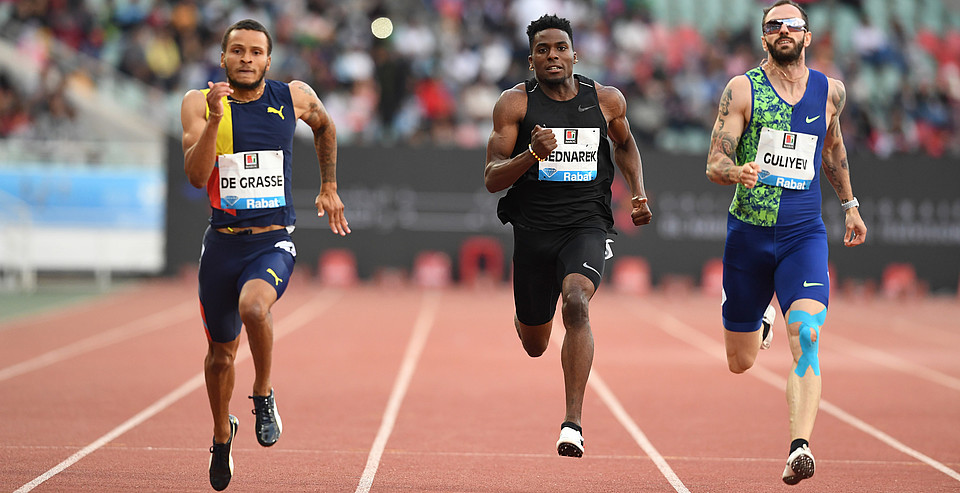 Friction burns, sore ankles and surprise defeats. Several athletes took a bruising in Rabat on Sunday as the Road to the Final touched down in Africa. Here's what you missed in the sixth Diamond League meeting of the season.

There slips, surprises and stellar performances in the Moroccan capital on Sunday night, as the Road to the Final began to heat up in several Diamond Disciplines.

Sergey Shubenkov left Rabat with some very tangible scars, while other Diamond Trophy holders will be hurting on the inside after suffering nail-biting defeats in North Africa.

Here is everything you missed from the sixth IAAF Diamond League meeting of the season.

Meet in a minute

We know that some of you are busy people, which is why we produce our turbo-charged meet-in-a-minute highlights package after every stop on the Road to the Final. <link https: www.instagram.com p byyopebifsy external-link-new-window internal link in current>To catch up with all of Sunday night's action in the space of just 60 seconds, click here.

For those with a bit more time on their hands, here's an ambling, meandering guide through some of the top performances and stories from Sunday night, starting with the sprints.

The women's sprints continue to throw up surprises this season, with Blessing Okagbare surging past a comfortable looking Marie-Josée Ta Lou to take victory in the 100m in Rabat and become the third different winner in three meetings on the 100m Road to the Final thus far.

There was also a turn up for the books in the men's 200m, as Andre De Grasse returned to his best form with a big, booming bang to clock a season's best of 20.19 and take his first victory on the Diamond League circuit since 2017.

Elsewhere on track, Genzebe Dibaba continued her dominant form in the women's 1500m, making it two wins in two with a world-leading and meeting-record-busting 3:55.47. She remains second in the standings behind compatriot Gudaf Tsegay, who has already secured her place in the final thanks to three podium finishes so far this season.

Botswana's Nijel Amos has also nailed down his place in the men's 800m Diamond League Final after he edged past Diamond Trophy holder Emmanuel Korir on the final straight to take a dramatic victory in Rabat.

There were more defeats for Diamond Trophy holders in the field events, with Luvo Manyonga and Katerina Stefanidi both losing in the jumps.

Stefanidi finished only fourth in the women's pole vault as her long-time rival Sandi Morris won with a meeting record of 4.82m. Manyonga, meanwhile, was carried off on a stretcher after hurting his left foot in his fourth jump.

There was also disappointment for six-time Diamond Trophy winner Sandra Perkovic, who finished third in the women's discus behind Cubans Yaime Perez and Denia Caballero. Perkovic remains on course for a place in the Final, however, having picked up ten points from her first two meeting this season.

Performance of the day

Goes to 110m hurdler Sergey Shubenkov, who sacrificed a significant amount of the top layer of skin as he dived over the finish line to clock a meeting record of 13.12 after being accidentally tripped by falling rival Omar McLeod. There were quite a few friction burns but no hard feelings after the race, as Shubenkov beat McLeod for the first time this season. The Diamond Trophy holder is now well on course for a place in the final with 22 points to his name.