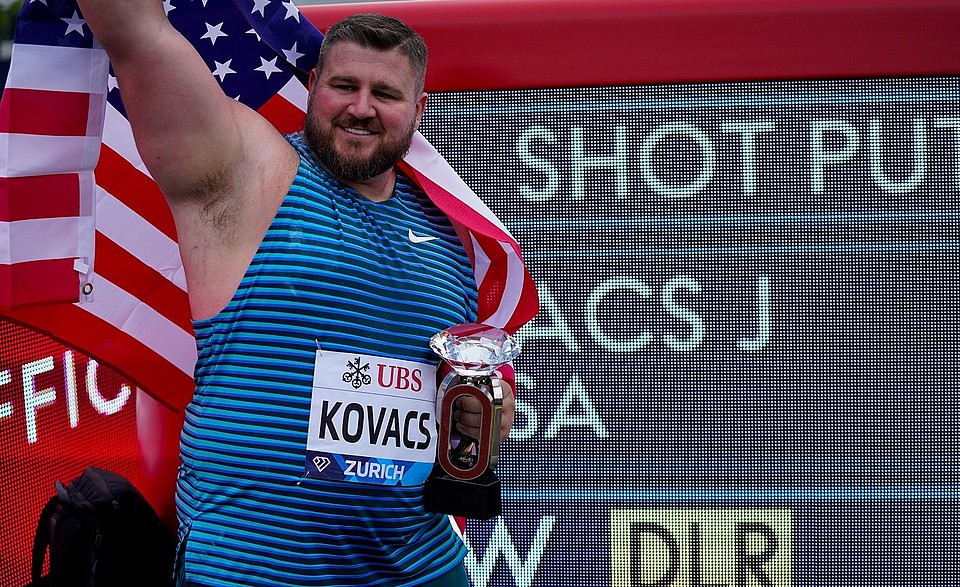 Joe Kovacs broke a shot put Diamond League record as the first six Wanda Diamond League champions of 2022 were crowned at the city event on day one of the final in Zurich on Wednesday.

US shot putter Joe Kovacs smashed the Diamond League record on Wednesday as the first of six Wanda Diamond League champions were crowned at a city event in downtown Zurich.

Kovacs launched 23.23m in the second round of the men's shot put to claim the second Diamond Trophy of his career, having last won the title in 2015.

In the women's shot put, Chase Ealey completed her 100 record in the Diamond League this season with a fifth win in five meetings, a third-round effort of 20.19 handing her a first career Diamond Trophy.

It was the second time in a row that the shot put titles have both been won by US athletes, after Ryan Crouser and Maggie Ewen triumphed last year.

Kenya's Beatrice Chebet won the women's 5000m, holding off the likes of Gudaf Tsegay and Sifan Hassan on the three-lane city track to claim her first ever series title.

In the women's pole vault, World Championships bronze medallist Nina Kennedy triumphed in a thrilling battle with US rival Sandi Morris. The Australian cleared 4.81m to edge out the American and claim her first Diamond League title. For Morris, the wait for a Diamond Trophy goes on.

5000m title holder Berihu Aregawi was unable to defend his trophy, however, as Kenyan rival Nicholas Kipkorir stormed to victory in 12:59.05 in the last event of the evening.

Three-time Diamond League champion Mutaz Essa Barshim endured a torrid evening in the high jump, clearing only 2.18m before he crashed out with a series of failures 2.24m, 2.27m and 2.32m.

Barshim's struggles cleared the way for a thrilling battle between JuVaughn Harrison and reigning champion Gianmarco Tamberi. The American held the lead until Tamberi cleared 2.34m at the last attempt to snatch victory from the jaws of defeat and claim a second successive Diamond Trophy.