Shanghai: Lavillenie to launch 2016 Diamond Race on 14th May 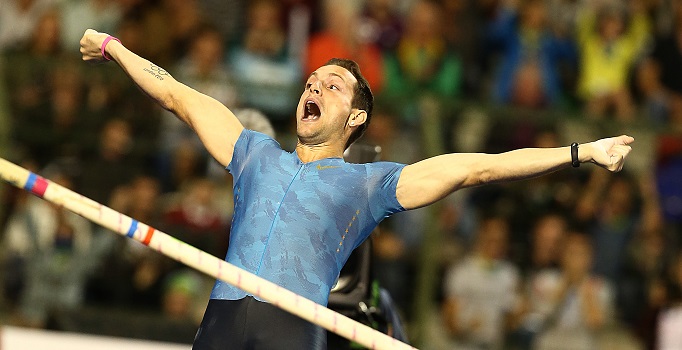 Pole vault world record holder Renaud Lavillenie will launch his 2016 IAAF Diamond League campaign in Shanghai on 14 May it was announced today by the meeting organisers.

The flying Frenchman confirmed his fabulous form when he won his second world indoor crown in Portland last Thursday with a championship record of 6.02 metres, taking just two vaults to secure the gold medal. But Lavillenie is already looking forward to the outdoor season where he hopes to retain his Olympic title and win an unprecedented seventh Diamond Race for his event.

Lavillenie makes no secret of his love for the Diamond League having won the Diamond Race more times than any other athlete. At the Van Damme Memorial meeting in Brussels last September, the Olympic champion clinched his sixth Diamond Trophy when he cleared 5.95m, maintaining his record as the only athlete in any event to have won the Diamond League every year since the circuit of world-class, one-day meetings started in 2010.

After a difficult year in 2015, when the three-times European champion again failed to take gold at the World Championships, Lavillenie is keen to kickstart the 2016 summer season with another victory at China’s premier international athletics meeting. Lavillenie leapt a world leading height of 5.92m on his last appearance in Shanghai two years ago, a superb performance which turned out to be the curtain raiser to an undefeated season leading to him being voted the IAAF male athlete of the year.

“I’m very happy to jump in Shanghai in the first pole vault event of the 2016 Diamond League,” said the self-styled ‘airLavillenie’. “When I competed there two years ago it was my first performance in China and one that went very well for me at the start of a dream season.” “I hope I can jump even better this time and set the standard for this outdoor season when a seventh Diamond Trophy and gold at the Rio Olympic Games are my goals.”

The signs are good for a repeat performance as the 29-year-old has been in top shape throughout the indoor season with six victories from eight meetings and three jumps above the magical six-metre barrier, including a world-leading 6.03m vault in the Czech Republic on 5 March.

Lavillenie knows better than anyone what it’s like to soar over six having cleared that height no fewer than 17 times including, most famously, when he breached 6.16m to add 1cm to Sergey Bubka’s 21-year-old world record mark at the Pole Vault Stars meeting in Donetsk on 15 February 2014. Lavillenie’s vault in Donetsk was the highest ever achieved in indoor or outdoor competition, but the reigning Olympic and European champion still has his sights trained on Bubka’s 20-year-old outdoor record of 6.14m. His current outdoor best is the French record of 6.05m set at the Eugene Diamond League meeting last May.

More star names will be announced for the 2016 Shanghai  Diamond League meeting in the next few weeks.