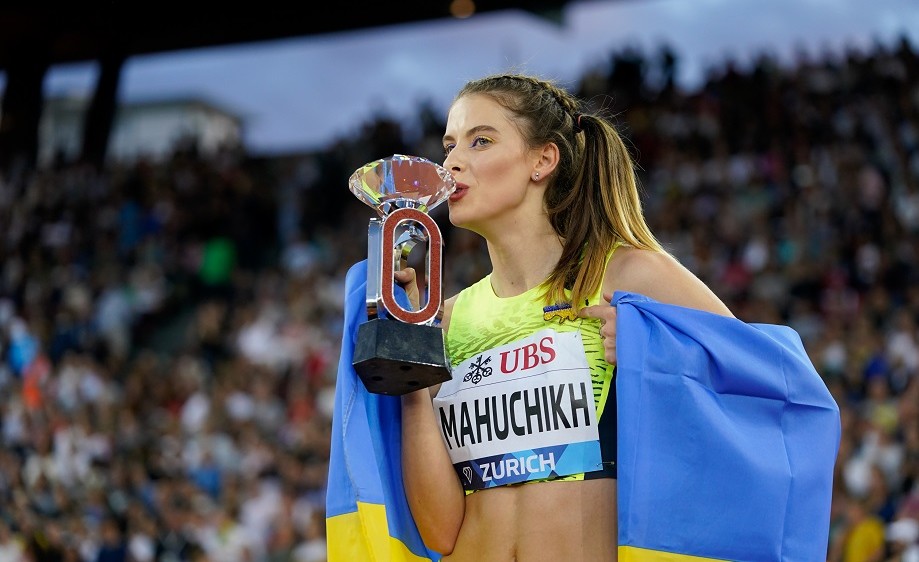 Yaroslava Mahuchikh proudly flew the flag for her Ukrainian compatriots with a first Wanda Diamond League title in the women's high jump in 2022.

Expectations of Yaroslava Mahuchikh were higher than ever at the beginning of the 2022 season. Having secured her first major global gold at the World Indoor Championships in Belgrade, Ukraine's rising star had two more gongs in her sights for the summer season: the outdoor world title and the Diamond Trophy.

Mahuchikh had come within a whisker of the Diamond League title in 2021 when, still just 19, she took Mariya Lasitskene to the brink in a thrilling battle at the women's high jump final on Zurich's Sechseläutenplatz. With Lasitskene out of action in 2022 and the wind in her sails after Belgrade, she was strong favourite to take the title a year later.

Her success in Serbia was all the more impressive given that it came against the horrific backdrop of conflict in Ukraine. Mahuchikh, like many of her fellow athletes, was forced to flee her hometown of Dnipro in early 2022 and train on unfamiliar territory for most of the season while the bombs and bullets raged back home.

She nonetheless made a dominant start to the campaign in Eugene, in what appeared at the time to be a perfect dress rehearsal for the World Athletics Championships. Leaving the rest of the field miles behind her, Mahuchikh soared over 2.00m in her first Diamond League appearance of the season, recording a world lead and a fourth two-metre jump of her career on the Diamond League circuit.

The Ukrainian consolidated her position at the top of the qualification standings over the following month, cruising to another comfortable victory over compatriot Iryna Gerashchenko with 1.96m in Rabat before improving her own world lead with 2.01m in Paris.

A dip in form came at just the wrong moment, however, with Mahuchikh suffering her first Diamond League defeat of the season in Stockholm, just days before she departed for the World Championships in Oregon.

Mahuchikh slipped to a fifth place finish after clearing only 1.89m in Sweden, allowing Australia's Eleanor Patterson to claim her first win of the season. It was Patterson, too, who would go on to beat her in Oregon, leaving Mahuchikh with a silver medal she said "felt like gold" against the backdrop of her turbulent 2022.

The then 20-year-old soon bounced back with an emotional gold medal at the European Championships in Munich, and it didn't take long for her to return to winning form in the Diamond League once the series returned in August. After a narrow defeat on countback to Safina Sadullayeva in Silesia, Mahuchikh saved her best performances for the last two meetings of the season.

In Brussels, she set a new personal best and equalled the Ukrainian record with a breathtaking 2.05m, leaving Patterson a full 11 centimetres behind her in second place. Buoyed by the success, she even made a valiant attempt at breaking the world record with three jumps at 2.10m.

A week later in Zurich, she got her hands on her third major title of the season, as she claimed her first ever Diamond Trophy with a winning jump of 2.03m, once again leaving clear daylight between herself and the rest of the field.

"It is so cool to win my first Diamond Trophy," she said after being crowned Wanda Diamond League Champion, ending on a poignant note as she looked ahead to more success next season. "Now, every competition, every win is so important for me and for Ukraine. I just want to be alive, I want to come back to Ukraine to my city. See you next season."