Stockholm: Five Things To Look Out For 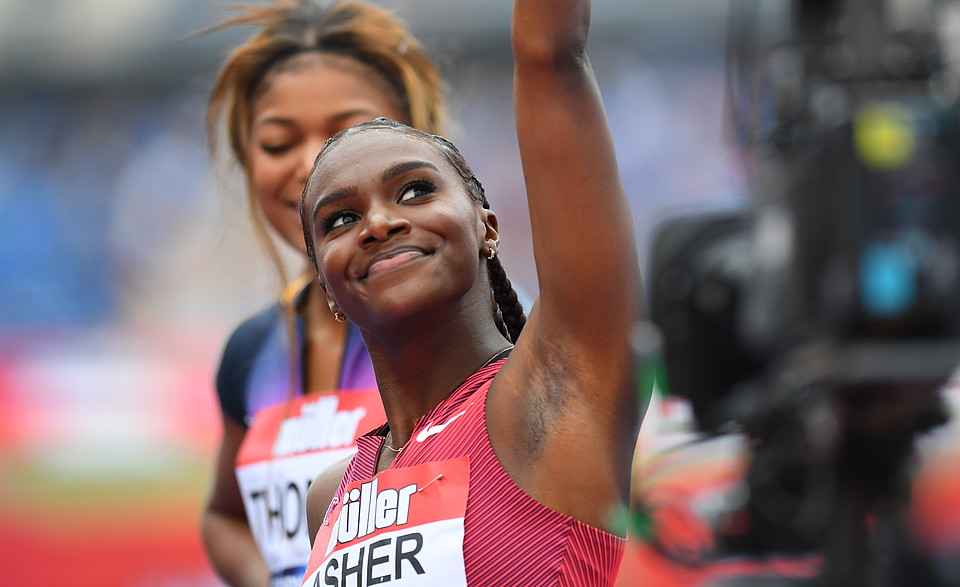 Great Britain's Dina ASHER-SMITH reacts after winning the 100m women final at the Diamond League track and field meeting at the Alexander Stadium in Birmingham on May 21, 2022.

Neeraj Chopra is out to make history for India while British stars Dina Asher-Smith and Daryll Neita clash in a women's sprint showdown at the Stockholm leg of the 2022 Wanda Diamond League this Thursday.

Jacobs back in action

Sprint fans have had to wait longer than expected to see men's 100m Olympic champion Lamont Marcell Jacobs in the Diamond League this season. After picking up an injury in Savona early in the season, the Italian star was forced to pull out of planned appearances in Oslo and at his home meet in Rome as he looks to claim a first career Diamond Trophy this season. But the 27-year-old is now back to fitness and will launch his 2022 campaign in Stockholm on Thursday against the likes of Reece Prescod and Akani Simbine.

While all eyes will be on Jacobs in the men's 100m, there is also plenty to look forward to in terms of women's sprinting as British star Dina Asher-Smith takes on the likes of Switzerland's Mujinga Kambundji and Oslo Diamond League winner Ida Karstoft in the 200m.

Asher-Smith has good memories of Stockholm, having claimed her first ever Diamond League win in the 200m on a rainy night in the Swedish capital back in 2016. She is also out to bounce back after losing her 100m British title in a surprise defeat to Daryll Neita earlier this month. Having already bagged 12 points with two third-place finishes in Doha and Rome, a win on Thursday would almost certainly lock down her place in the 200m Diamond League Final.

Chopra out to make history

Another Olympic champion who will be making their first Diamond League appearance of the season in Stockholm is India's Neeraj Chopra, who will hit the circuit for the first time in four years when he takes on Jakub Vadlejch, Julian Weber, Anderson Peters and others on Thursday evening.

Chopra hoping to claim his first ever win in the series (his best performances so far being two fourth-placed finishes in Doha and Zurich in 2018). If he does so, he will also make history for his country, becoming the first Indian athlete ever to win a Diamond League meeting.

History was made yet again in the women's 400m hurdles last weekend as American star Sydney McLaughlin clocked 51.41 to break the world record for the third time in three years. The 2019 Diamond League champion looks all but unbeatable as she goes into a World Championships on home soil next month.

Yet if anyone can surprise McLaughlin in Eugene, it may just be Femke Bol. The flying Dutchwoman has dominated the Diamond League once again this season, claiming back-to-back wins in Rome and Oslo to establish a clear lead in the qualification rankings. The last time she competed in Stockholm, she broke the Diamond League record, and she will be hoping to send a message across the Atlantic with another fast time on Thursday.

After he cruised to the Diamond Trophy with four wins in five meetings last season, few would have expected Daniel Ståhl to go three meetings without a win on the Road to the Final in 2022. Yet that is what has happened so far this season, with the Swedish giant playing second fiddle so far to the sparkling form of Slovenian rival Kristjan Čeh, who has won all three meetings so far in the men's discus.

Ståhl has the perfect opportunity to set things straight with the home crowd behind him on Thursday, and he goes into his home Diamond League meeting with the wind in his sails, having launched a world leading 71.47 at the Swedish championships last week.