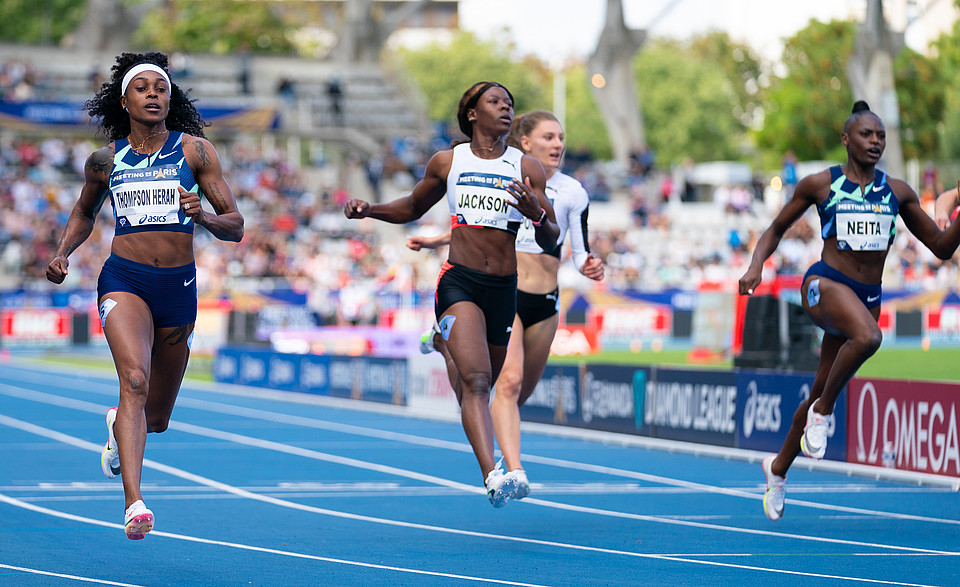 Elaine Thompson-Herahat with a Meeting Record of 10.72 in the Women's 100m at the 2021 Meeting De Paris meeting in Paris

29-year-old Thompson-Herah - named sportswoman of the year at the recent Laureus World Sports Awards - was an impressive triple gold medallist in Tokyo. She defended the 100m and 200m titles that she had won in Rio 2016, the first woman ever to do so, and improved her Rio relay silver with 4 x 100m gold. She later went on to win a third Diamond Trophy in the 100m in Zurich.

The Jamaican national record holder over 100m (10.54) and 200m (21.53), she’s the second-fastest woman in the world of all-time behind Florence Griffith-Joyner. Her season-opener of 10.89 at the USATF Golden Games in California in April ranks her second-fastest in the world this year to date.

“I’m obviously very proud of what I’ve achieved in my career so far, but there are more goals I want to achieve in the sport, so I’m now motivated to work even harder,” said the 2021 Diamond League champion. “I enjoyed racing indoors earlier this year, and I was pleased with how I opened my outdoors, but my focus is on working hard each day and getting back onto the podium at the World Championships this summer.”

World and European champion Dina Asher-Smith was announced for the Müller Birmingham Diamond League in March.

Daryll Neita, who finished eighth in the 100m final in Tokyo, ran her ten career best times in 2021. She clocked an impressive 10.93 lifetime best in the Wanda Diamond League final in Zurich and finished the season ranked second-fastest British woman of all time behind Asher-Smith.

“I was very focused going into last summer and I knew I was capable of going sub-11 seconds,” said the 25-year-old who is a two-time world silver medallist in the 4 x 100m relay. “I’d visualised lining up in the Olympic final against those incredible girls. I think you have to believe you belong there, and now I know that I do. I can’t wait to do it all over again this year and to get my season started in front of a home crowd in Birmingham.”

The Müller Birmingham Diamond League is the second meeting of the 2022 Wanda Diamond League series. The series comprises 14 meetings in total, starting with Doha on 13 May and concluding with a single final across two days in Zurich (7-8 September). Each meeting will be broadcast globally in a live two-hour programme.