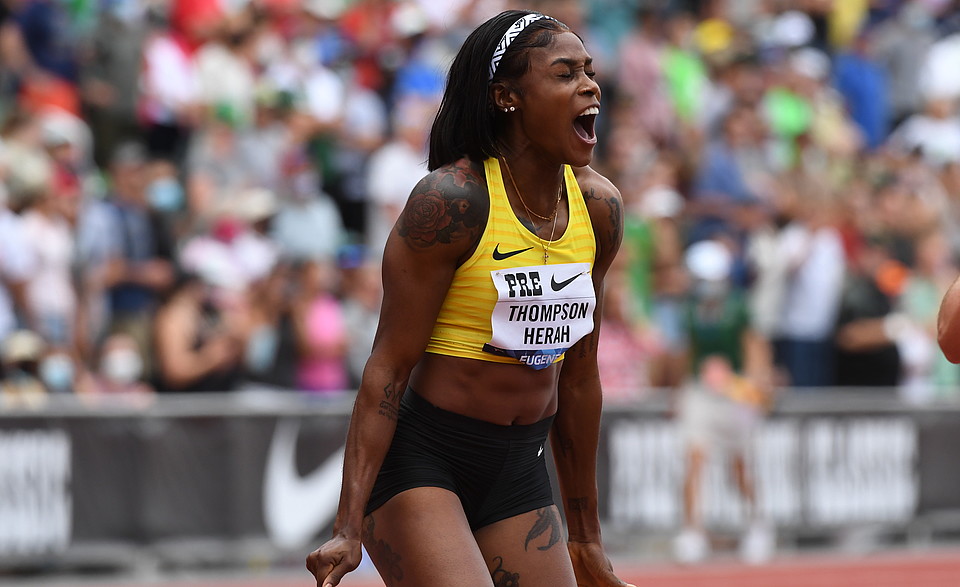 A year after she ran the second-fastest time in history in the 100m, Jamaican Olympic champion is back at the Prefontaine Classic in Eugene.

After experiencing one of the greatest sprint showdowns in history at The Prefontaine Classic last year, fans will be treated with quite the sequel in the women’s 100 meters on May 28. Six of the nine competitors from 2021 are set to return to Hayward Field this Saturday, including the champion Elaine Thompson-Herah.

The 29-year-old Jamaican put together one of the strongest seasons ever in 2021. At the Tokyo Olympic Games, she successfully defended her gold medals in the 100m and 200m and brought home gold as a part of the Jamaican 4x100m relay team, becoming the third person, male or female, to ever complete the Olympic sprinting triple. At the Pre Classic, Thompson-Herah’s winning time of 10.54 was just 0.05 seconds off the world record, making her the second fastest women ever over 100m.  She would cap off her season by winning the Wanda Diamond League title in Zurich.

Sha’Carri Richardson is also featured in the lineup. The American phenom sent a shockwave through the sport with her performance at the U.S. Olympic Trials last summer. The 22-year-old ran a wind-aided 10.64 in the semi-finals before ultimately winning the finals in 10.86. She will look to mix it up against a stacked Pre field in 2022.

The depth doesn’t stop there. One week removed from the Birmingham Diamond League, the defending 200m world champion Dina Asher-Smith and Olympic 100m bronze medalist Shericka Jackson will square off again. Asher-Smith held on for victory at Alexander Stadium, clocking 11.11 to Jackson’s 11.12. Asher-Smith is looking to bounce back this year after a hamstring injury ended her hopes for an individual medal in Tokyo.

The 2019 World Championship bronze medalist Marie-Josee Ta Lou will compete in her fifth Prefontaine Classic. Joining her in the field are 2019 world junior 100m champion Briana Williams, an American duo of Teahna Daniels and Twanisha Terry, and the world indoor 60m champion Mujinga Kambundji who will also be competing in the 200m on Saturday.

The women's 200m, which is not a Diamond Discipline, also features a star-studded line-up including Shelly-Ann Fraser-Pryce and Shaunae Miller-Uibo.