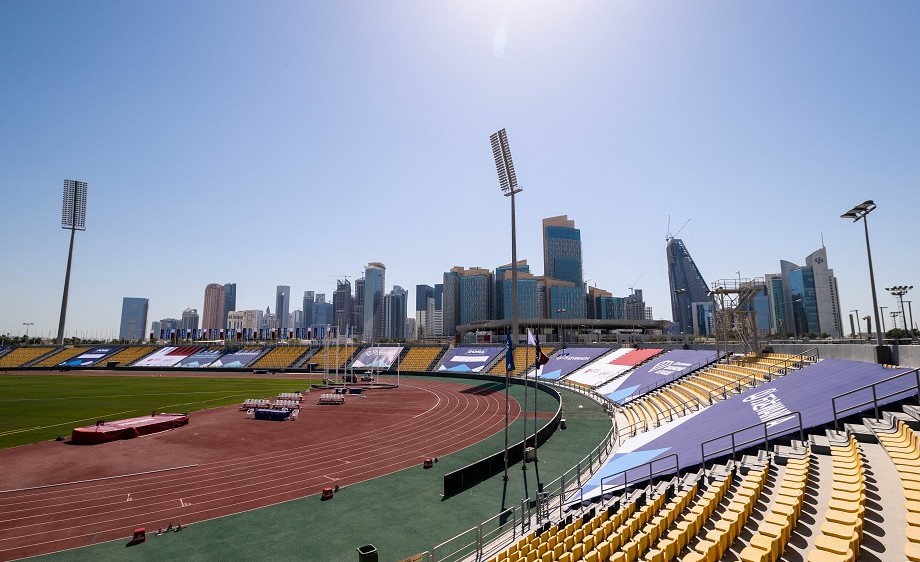 Mondo Duplantis, Rai Benjamin, Dina Asher-Smith and Andre De Grasse will all be in action when the 2022 Wanda Diamond League gets underway at the Ooredoo Doha meeting on Friday.

The much-anticipated Ooredoo Doha Meeting, the opening event of the 2022 Wanda Diamond League series, takes place on Friday 13 May.

Seven reigning Olympic champions and a host of Olympic and world medallists will compete at the Qatar Sports Club where six world leading performances, three meeting records, and six area and national records were set 12 months ago.

Event highlights are expected to include the men’s pole vault, high jump, 400m hurdles and 200m and the women’s 200m.

The 22-year-old, who was crowned world indoor champion in March, has dominated the pole vault in recent years. In 2020 he set world records of 6.17m and 6.18m during the indoor season, then went on to clear 6.15m in Rome, the highest outdoor vault in history. He cleared a new world record height of 6.19m in early March before improving that mark to 6.20m, another world record, to win gold at the World Indoor Championships in Belgrade.

Conditions in Doha should be conducive to jumping high, and Duplantis is aiming to get his season off to a strong start ahead of his European title defence and the opportunity to win his first senior world title this summer.

WATCH: Best of Mondo Duplantis in 2021

Joint Olympic high jump champions Mutaz Barshim (QAT) and Gianmarco Tamberi (ITA) – who shared one of the greatest sporting moments of all time when they topped the podium in Tokyo – will reunite in competition in Doha.

The pair, long-standing friends and rivals, have supported one another through the best and worst of times, not least when enduring career-threatening injuries in the years prior to their famous Olympic victory.

Double world champion Barshim was outstanding when winning global gold in Doha in 2019 to become the first man to successfully defend a world high jump title. Remarkably, it followed a devastating ankle injury in 2018. Twice an Olympic silver medallist (2012 and 2016), he is the Qatari national record holder with a best of 2.43m, the second highest jump of all time.

Tamberi, the former World Indoor and European Championships gold medallist, is the Italian national record holder with a best of 2.39m. He was enjoying his best year ever when he suffered an horrific injury ahead of the Rio Games in 2016. His journey back to fitness was gradual and challenging, but he returned to medal-winning form with a European indoor title in Glasgow in 2019. He most recently finished third at the World Indoor Championships in Belgrade (2022).

Joint world leaders Sanghyeok Woo (KOR) and Hamish Kerr (NZL), the world indoor champion and world indoor bronze medallist respectively, are also in the field. Woo, a former world under-18 champion, cleared 2.34m to win his first global senior title in Belgrade in March. He finished fourth in the Olympics with a Korean national record and personal best of 2.35m. Olympic finalist Kerr – who shared bronze with Tamberi in Belgrade – is the New Zealand national record holder with 2.31m. Both athletes have cleared 2.30m this season.

WATCH: Best of Gianmarco Tamberi in the Wanda Diamond League

Benjamin, an Olympic and world 4 x 400m relay gold medallist, finished runner-up to Norwegian superstar Karsten Warholm in Tokyo. His time of 46.17 - an American national record - was inside the previous world record which Warholm obliterated when winning gold (45.94). He opened his season with a third-place finish over 200m (20.01) at the USATF Golden Games on 16 April and most recently clocked 48.60 to win the 400m hurdles at the Seiko Golden Grand Prix, a World Athletics Continental Tour Gold meeting, on 8 May.

Samba has been at the vanguard of progression in the men’s 400m hurdles. The 26-year-old was the second athlete behind America’s former world record holder Kevin Young to run under 47 seconds when he clocked a lifetime best and Qatari national record of 46.98 in 2018. He ran a season’s best (47.12) to finish fifth in Tokyo.

Dos Santos, the Brazilian national record holder with a best of 46.72 achieved in the Tokyo final, was seventh in the World Championships in Doha in 2019. He has already shown impressive form this season, clocking a lifetime best over 400m (44.54) at the USATF Golden Games. His 48.41 400m hurdles opener is the second-fastest in the world this year to date.

Benjamin took victory in Doha 12 months ago in a new meeting record of 47.38, improving the previous mark set by Samba in 2018. Dos Santos was second on that occasion running a personal best and national record (at the time).

De Grasse, the Canadian national record holder (19.62), is a multiple Olympic and world medallist. He backed up his 200m gold in Tokyo with 100m bronze and silver in the 4 x 100m relay. At the 2019 World Athletics Championships in Doha, he finished second in the 200m and took bronze in the 100m.

Thomas, Olympic silver medallist in the 4 x 100m relay, finished third in the Tokyo 200m. The 25-year-old Harvard graduate, who has a best of 21.61, opened her season in style with a 22.02 200m at the USATF Golden Games - the second-fastest time in the world this year to date - less than half an hour after running the 100m final.

Jackson, Jamaica’s multiple Olympic and world medallist, took gold in the 4 x 100m relay in Tokyo and bronze in the 100m and 4 x 400m relay. Her last competitive outing in Qatar saw her repeat that impressive relay feat in addition to winning 400m bronze at the 2019 World Athletics Championships. Her 200m best is 21.81 (2021).

The current world lead Christine Mboma (NAM) is out after pulling up injured in the 100m at the Kip Keino Classic.

Unfortunately, Olympic, Asian and Commonwealth Games javelin champion Neeraj Chopra (IND) has withdrawn. The Indian national record holder had initially planned to open his season in Doha, however, in consultation with his team - and in preparation for a long season where his targets include the World Championships in Oregon and defending his Commonwealth and Asian Games golds - he has taken the decision to postpone the start of his 2022 campaign.

Mohammed Al Fadhala, Qatar Athletics Federation president, said: “We’re proud of what we’ve achieved at this event in recent years, but we must also look to the future. It’s important for us to build on our success as we continue to grow the reputation of the Ooredoo Doha Meeting on the global circuit and demonstrate our ability to host world class sporting events in Qatar.

“Last year’s event was particularly special with athletes delivering six world-leading performances and multiple meeting and national records. We have exceptional fields once again across this year’s programme, and as athletes work towards the World Athletics Championships in Eugene later this summer, I think we can expect to see their performances match our increasingly high expectations.”

The 2022 Wanda Diamond League starts in Doha on 13 May and concludes with a single final across two days in Zurich (7-8 September). Each meeting will be broadcast globally in a live two-hour programme.

As announced on Friday 6 May, the 2022 calendar has been restructured due to travel restrictions and strict quarantine requirements currently in place for entry into China, therefore the mid-season meetings in Shanghai and Shenzhen will not take place this season. A substitute meeting - the Kamila Skolimowska Memorial meeting in Chorzow, Poland - will be held at the Silesia Stadium on 6 August and will comply with all Wanda Diamond League requirements.