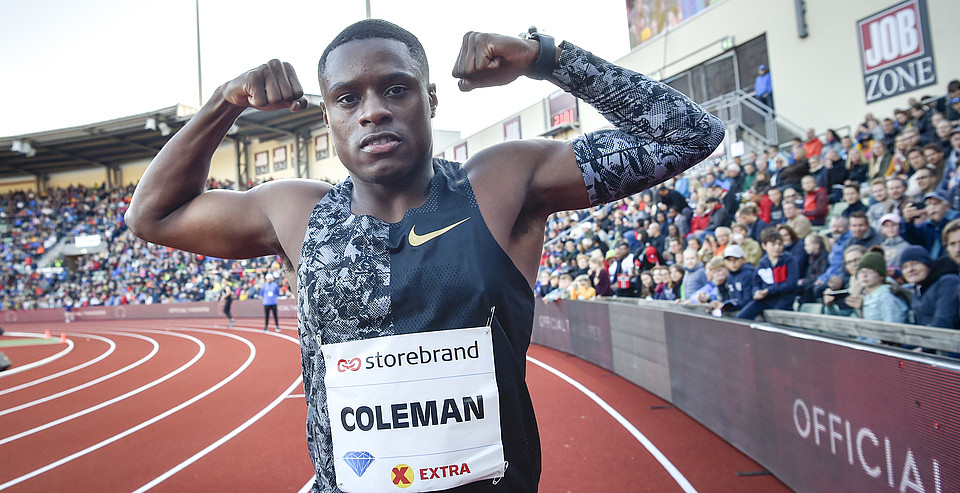 The world’s fastest man of the last two years returns to the Prefontaine Classic, and this time he’s fully healthy and looking forward to a third world leader.

Running fast has rarely been a problem for Christian Coleman. The 23-year-old was on fire last year, clocking the three fastest times ever in the 60 meters topped by a gold at the World Indoor Championships. His season took a pause early in the spring as he nursed a leg injury and felt ready to go for last year’s Pre Classic.

Though he finished second, his wind-aided 9.84 was the second fastest of his life, following the 9.82 collegiate record he set while at Tennessee when his 2017 campaign earned him The Bowerman Award as the nation’s top collegian. Coleman got back to his best late last summer, avenging his earlier losses to claim the IAAF Diamond League title in 9.79 to become the third-fastest American ever alongside Maurice Greene.

This year the Georgia native has raced much more sparingly, skipping indoors altogether. He is the world leader at 9.85, and later this year he’s aiming to improve on the silver medal he earned at the London World Championships.

5-time Pre winner Justin Gatlin, 37, is the most accomplished in the field with six major individual golds ranging from the 60 to the 200 and dating back to 2003. He is looking to regain the form that saw him win gold at the London World Championships, when he dethroned Usain Bolt. He missed the T&FN world rankings last year for the first time since 2011, ending a six-year reign as the top American.

Gatlin, who has three Diamond League titles, has only raced the 100 two times this year – both faster than he recorded all of last year.

Zharnel Hughes, 23, won the European Championships last summer after lowering his PR to 9.91, fastest by a British sprinter since Linford Christie’s 9.86. He is  undefeated this year. Hughes was born in Anguilla and competed for the Caribbean island in the 2014 World Junior Championships in Eugene, taking 5th in the 200 meters. A year later he began his representation for Great Britain and was 5th in the Beijing Worlds with a PR 20.02. He prepped in Jamaica and his 10.12 remains their high school championship meet record.

Michael Rodgers, 34, is the only American to run sub-10 in each year since 2009, when he won the Pre Classic in a then-PR 9.94. He has been a force ever since, clocking sub-10 times seven times in eight Pre Classic centuries. His streak of sub-10s will be put to the test, as this year his best so far is 10.00.

Jamaica’s Tyquendo Tracey, 26, broke 10 seconds for the first time last summer to become the 20th from his country under that barrier. Last year he also won his only national title. He was runner-up this weekend at 10.00, third fastest of his career.

Youngest in the field is Italy’s Filippo Tortu at 21. His first sub-10 came last year at 9.99 and broke the national record of 10.01 set by the beloved Pietro Mennea to win the 1979 World Cup in Mexico City. This year Tortu has run a wind-aided 9.97.

Cameron Burrell, 24, won the NCAA title last year after finishing runner-up to Coleman in 2017. He first ran his PR 9.93 in 2017, then matched it at last year’s U.S. championships. Last year he also anchored the Houston 4 x 100 team to its second-straight NCAA win in 38.17, breaking a 29-year-old national collegiate record.

Burrell has been surrounded by Olympic sprint royalty his entire life. His 9.93 broke the Houston school record of 9.94 (then a collegiate record) set by his dad and coach, Leroy Burrell, in 1989 – five years before Cameron was born. Leroy’s 9.94 broke the previous school record set by Cameron’s other coach, Carl Lewis (10.00 in 1981). Cameron’s mom, Michelle Finn-Burrell, was first in the family to win a national championship, taking the NCAA in 1985 at Florida State.