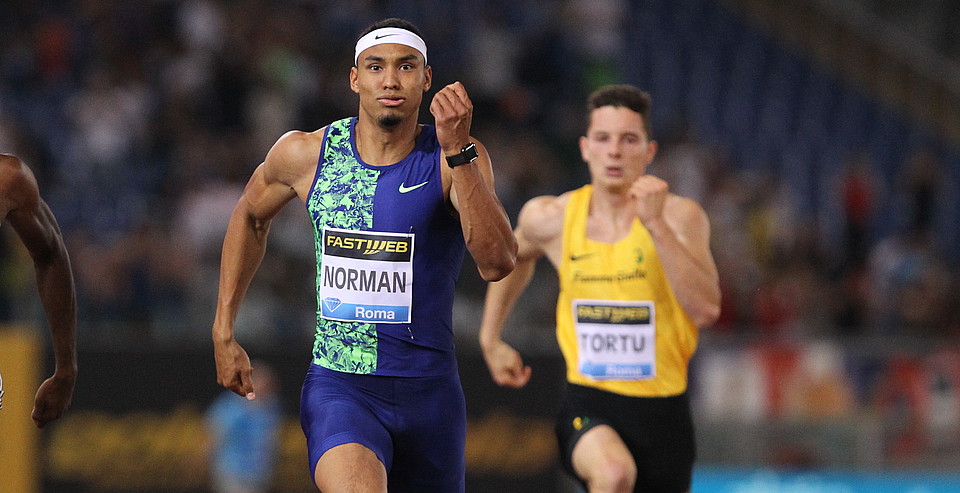 Michael Norman will have everyone’s attention in the Prefontaine Classic 400 meters – likely no one more than Fred Kerley, last year’s world No. 1.

This will be the first meeting for the two Americans since Kerley swept the NCAA and U.S. Championships two years ago. The latter was the last time Norman, then 19, lost a 400 race. The duo combined last month to easily win both 400s on the 2019 IAAF Diamond League circuit so far, Kerley in Shanghai and Norman in Stockholm.

Michael Norman was the world’s fastest last year with a collegiate record 43.61 (breaking Kerley’s year-old standard of 43.70). This April he rocked the track world with a 43.45 PR – a time bettered only by the last three world record holders. Last year he also set a world record indoors (44.52) en route to winning the The Bowerman Aaward as the nation’s top collegian in his final season at USC.

Norman has dominated almost every 400 he’s run the last two years – his 8-meet winning streak has an average winning margin of 0.82 seconds. His explosiveness reminds some of Michael Johnson, the only man to win Olympic 400 and 200 gold. In the half-lapper he flashed a world-leading 19.70 at the Rome Diamond League meet, merely beating World No. 1 Noah Lyles for the first time in a rivalry that began even before a fantastic meeting at the 2016 U.S. Olympic Trials, when both Norman and Lyles nearly became Olympians as 18-year-olds.

Fred Kerley, 24, woke up the world when he ran 43.70 two years ago in the NCAA regionals. Not only was it the fastest time ever clocked before June, it also broke the 25-year-old collegiate record of 44.00 set by Quincy Watts – Norman’s coach. Kerley swept the NCAA indoor/outdoor titles for Texas A&M and won his first U.S. crown, then finished the long year anchoring the U.S. 4x400 team to silver in the London World Championships.

Last year he won three Diamond League races, topped by the final in Zurich, as he was No. 1 in the Track & Field News world rankings. This year he has yet to lose and ran a 44.4second-leg split for the U.S. team at the World Relays in Japan last month.

Paul Dedewo, 28, made his first T&FN world rankings last year at No. 3. His path is unlike any other. In his own words, he’s an anomaly and that link tells the fascinating story of his perseverance becoming one of the world’s best. He didn’t break 45 seconds until last year, when he did so nine times with five PRs. He was runner-up in his first U.S. Championships final last summer.

Michael Cherry, 24, was World Indoor silver medalist last year after winning his first U.S. title. Outdoors he owns a 44.66 best and joined Kerley on the London Worlds silver 4x400 team. At LSU he ran on NCAA-winning indoor and outdoor 4x400 teams in 2016, joining Kerley (2017) and Norman (2018) with such sweeps.

Nathan Strother, 23, was the Diamond League runner-up last year. The Tennessee grad set his 44.34 PR last year as runner-up in the SEC Championships and made his first U.S. Championships final last year, taking 4th. He led off the U.S. 4x4 squad at the World Relays in Japan.

Royalty in the 400 meters includes LaShawn Merritt and Kirani James. They’ve combined to win every Pre Classic 400 since 2012, and Merritt’s first Pre Classic dates back to 2005 when Norman was just beginning elementary school.

LaShawn Merritt was only 19 when he won his first major gold, the World Indoor 400 in 2006. He will turn 33 on June 27 and owns 12 major gold medals – three in the Olympics and his last in Rio featured an unpressured 43.97 anchor split for the U.S. 4 x 400 team. In individual events, Merritt was the only American man in either the 400 or 200 at Rio, the first time any American made both finals since Johnson in 1996.

Kirani James, 26, may forever be linked to Merritt, including the Pre Classic. They raced to the most thrilling finish in meet history, both clocking 43.97 in 2014 with James getting the lean for victory, his first of three straight. James won Grenada’s first Olympic gold in any sport in London, but started his legendary run with his 2011 World Championships victory when as an 18-year-old, he outdueled Merritt in a stirring homestretch battle.